Our journey today continues through the book of Judges. It is a time when Israel occupies the Promised Land, before they have a king. When a leader is needed within the nation, a judge is appointed to guide people on seeking God’s will.

Take a few minutes to pray for God’s guidance and for His wisdom to be granted to you as our journey for today takes us through Judges 7-11. Now take some time and read Judges 7-11. The journey begins!

The book of Judges tells the tragic story of Israel’s moral corruption and decay, leading to their abandonment of following the laws of the Lord as given to Moses. The book of Judges gets its name from the types of leaders during this time, but they were not legal judges like we have today.

Judges 7-11: Our journey today begins exactly where our journey left off last week. Gideon is preparing to engage the Midianites in war. The story begins with God sending all but 300 of Gideon’s 25,000 soldiers home. Only the 300 soldiers God had chosen were go to battle with the Midianites. Why? Because God wanted to make it perfectly clear to the Israelites, and His enemies the Midianites, the enemies of His people Israel, that He waged the war against and defeated the Midianites and not 300 Jewish soldiers. The Ephraimites are upset at Gideon for not asking them to join the battle sooner. Abimelek plotted and killed his 70 brothers, son’s of Gideon, to take control of Jerub-Baal’s (Gideon) possessions. Jothan was the only son of Gideon to survive the massacre. The brothers were all killed the same day, on the same rock. Abimelek does not go unpunished for his sin. Two judges, Tola and Jair arise after Abimelek’s death. Combined both Judges governed Israel for a period of 45 peace-filled years. After the death of Jair, the Israelites turned to false gods. Jephthah was a man rejected even though his father was Gilead, because his mother was a prostitute. God used him to lead the people against the Amorites and other descendants of Ishmael. However, Jephthah makes a rash vow, resulting in the sacrifice of his daughter. There are two principle theories posed by Bible scholars as to what happened with Jephthah’s daughter. One is that she was offered as a burnt offering, following in the footsteps of the Canaanites, whom the Israelites had failed to drive out and destroy. The other is that she was to remain a virgin for her entire life. (Judges 7:1-11:40) 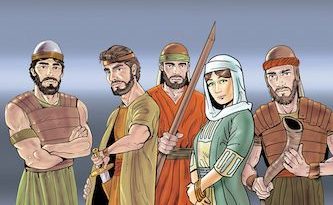