Today we continue our journey through the book of Isaiah, who was a prophet of the Lord. It is important for you to keep in mind as we study the prophets that they didn’t have supernatural understanding of the things which God was revealing to them. They had absolute dedication to God’s instruction: even if that meant telling the entire Nation of Judah – hundreds of thousands of people – that a their King was to be born, die, and come back to start a new nation. Although Isaiah trusted and followed, it is not likely He understood.

Take some time to seek God’s guidance and understanding for our journey through Isaiah 18-22 today. Read Isaiah 18-22. Let’s journey!

Following Solomon’s death, the Kingdom of Israel was split in two; Judah, in the south, consisted of two tribes and remained under the control of Solomon’s son Rehoboam, while Israel, to the north, consisted of the remaining ten tribes and came under control of Jeroboam. The split occurred around 930 BC. During the nearly 200 years in between the split and the writing of Isaiah, the two nations were often at war. Throughout the book of Isaiah, the prophet offers both messages of coming judgement and of hope for redemption.

Isaiah 18-22: In all the chapters journeyed through today, we learned of God’s punishment on those who persecute His people. Once again, we see God using pagan lands to capture Jerusalem and His chosen people, Israel, as a form of punishment and correction to point them back to Him. It seemed that every country of Old Testament time had their gods. The rulers appear to believe that when they went to battle that the country with the superior god would prevail. This logic would lead to the belief that the various god’s powers rose and fell somewhat like the tide of the ocean. The children of Israel did not seem to follow that way of thinking. It appears that when they decided to engage in the sinful conduct of other nations that God would withdraw His protection from them. They appeared to know this; yet, like us today, they began to accept the sinful ways of the world around them. God’s judgement would come upon them. They would suffer at the hands of their captors until they returned to God, who, upon hearing their plea to Him, would restore them. (Isaiah 18:1-22:25)

Read chapters 18 through 22 and consider the following: God is God of all people; not just the people of Israel. That said, it is important to understand that the people of Israel hold a special place with God because He made them caretakers and deliverers of His word. Why is the distinction important? What warning of judgment is Isaiah giving? What message of hope is Isaiah giving? How has God provided hope to you in trying times? 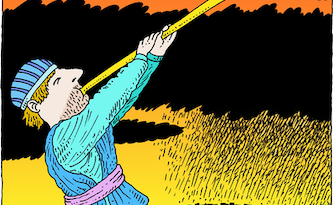