The Parable of the Workers in the Vineyard

“For the kingdom of heaven is like a landowner who went out early in the morning to hire workers for his vineyard. He agreed to pay them a denarius for the day and sent them into his vineyard.
“About nine in the morning he went out and saw others standing in the marketplace doing nothing. He told them, ‘You also go and work in my vineyard, and I will pay you whatever is right.’ So they went.
“He went out again about noon and about three in the afternoon and did the same thing. About five in the afternoon he went out and found still others standing around. He asked them, ‘Why have you been standing here all day long doing nothing?’
“‘Because no one has hired us,’ they answered.
“He said to them, ‘You also go and work in my vineyard.’
“When evening came, the owner of the vineyard said to his foreman, ‘Call the workers and pay them their wages, beginning with the last ones hired and going on to the first.’
“The workers who were hired about five in the afternoon came and each received a denarius. So when those came who were hired first, they expected to receive more. But each one of them also received a denarius. When they received it, they began to grumble against the landowner. ‘These who were hired last worked only one hour,’ they said, ‘and you have made them equal to us who have borne the burden of the work and the heat of the day.’
“But he answered one of them, ‘I am not being unfair to you, friend. Didn’t you agree to work for a denarius? Take your pay and go. I want to give the one who was hired last the same as I gave you. Don’t I have the right to do what I want with my own money? Or are you envious because I am generous?’
“So the last will be first, and the first will be last.”  (Matthew 20:1-16, NIV) 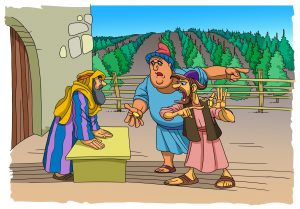 Life’s not fair.  It is a concept that is universally agreed upon, but what defines “fair?”  Each person has their own, exact definition, but from where does that definition come?  Usually ourselves, and our imperfect understanding of fairness.

This parable is not about life being fair, although that is how some people read it.  It is not about bargaining practices or searching for the best deal.  This parable was given in order to help build the foundation of understanding that anyone who accepts Jesus as their Lord and Savior, no matter what point they may be at in their life, or what they have previously done, they will be granted eternal salvation!

The Lord is the landowner.  He is gracious and generous, wanting all to come to Him and be rewarded.  Instead of being jealous of those who came to the Lord late, we should be rejoicing that they have joined us as children of the Lord!

What roles does “fairness” play in your life?  What role should it play?