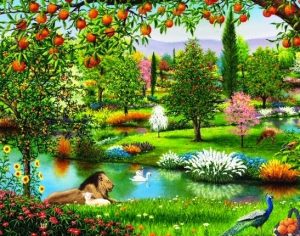 It was paradise.  There was more than enough fresh fruits and vegetables to go around, with no worry of rain or storms coming to destroy their crops.  (In fact, the very idea of storms and rains were not even in the residents’ vocabulary!)  The numerous animals roamed free with no fences to constrain them.  Young wolves played with the young lambs, and the lions rested beside cows.  There was no conflict.  The sun shined bright and warm.  Peace radiated throughout the land.

Even snakes were majestic creatures.  One approached the female human in this paradise.  It approached without notice, coming around the trees and between the other animals.  It came to rest beside the women, drawing her attention when it opened its mouth and began to speak.

He said to the woman, “Did God actually say, ‘You shall not eat of any tree in the garden’?”  …  But the serpent said to the woman, “You will not surely die.  For God knows that when you eat of it your eyes will be opened, and you will be like God, knowing good and evil.”  (Genesis 3:1b, 4-5, ESV)

The woman lived in paradise, wanted for nothing, yet the snake came and persuaded her that there was more she could have, something that would make her life even better.

Words are not always truth.  They can be twisted and tied together to mean something entirely new.  Of course in this case, the words were partially true.  This is perhaps, when words can be most effective – they tell the truth, but only partially.  The words spoken are true, but do not tell the whole story, do not tell what the consequences of the actions will be.

The woman did not die from eating the fruit – not immediately.  And her eyes were opened – to her detriment.  Because she listened to the half-truths, she suffered a separation from the Lord, and condemned all those who came after her to the same separation.  Her eyes were opened and she experienced shame, pain, suffering, and, eventually, physical death. 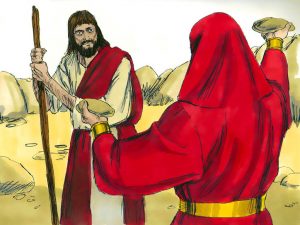 Thousands of years later, perhaps motivated by his earlier success, the serpent tried this tactic again.

Then Jesus was led up by the Spirit into the wilderness to be tempted by the devil. And after fasting forty days and forty nights, he was hungry. And the tempter came and said to him, “If you are the Son of God, command these stones to become loaves of bread.” But he answered, “It is written, “‘Man shall not live by bread alone, but by every word that comes from the mouth of God.’”  Then the devil took him to the holy city and set him on the pinnacle of the temple and said to him, “If you are the Son of God, throw yourself down, for it is written, “‘He will command his angels concerning you,’ and “‘On their hands they will bear you up, lest you strike your foot against a stone.’”  Jesus said to him, “Again it is written, ‘You shall not put the Lord your God to the test.’” Again, the devil took him to a very high mountain and showed him all the kingdoms of the world and their glory. And he said to him, “All these I will give you, if you will fall down and worship me.” Then Jesus said to him, “Be gone, Satan! For it is written, “‘You shall worship the Lord your God and him only shall you serve.’”  Then the devil left him, and behold, angels came and were ministering to him.  (Matthew 4:1-11, ESV)

This time, the serpent, Satan, was unsuccessful.  Once again, he twisted words to make them appear to mean what they did not.  This is Satan’s trick, Satan’s power.  He twists words, using half-truths, to make his argument seem credible.

Words have the power to persuade, convince, and manipulate.  During every election in the United States, we see this same trick used – words twisted, truths half-given and half-hidden.  Numerous individuals come on the radio and television, print their opinion in the newspaper, on the internet, and social media, trying to convince us, using words, that they (or the person they are supporting) are the best candidate to represent and serve us for the next several years.  And, after every election, we come to the shocking revelation that those carefully crafted words that were used to persuade us to elect them, were only half-truths, if not outright lies.