When Jesus saw the Temple being used as a place of business instead of a place of worship, He became enraged, throwing over tables, scattering money across the floor, and chasing out the merchants with a whip.  Jesus then spoke of how the Temple was a place of worship, not a place of business (Matthew 21:12-13).  Throughout His ministry, He frequently spoke out against the incorrect teachings by the Pharisees.  Jesus provided correct translation and meaning of the Torah, contradicting what the Pharisees had preached for years.  The Pharisees probably complained amongst themselves about how this “trouble-maker” never stopped talking!  Yet, when the literal trial for His life came, Jesus stopped talking.

When Herod saw Jesus, he was exceedingly pleased. He had wanted to see Him for a long time because of what he had heard about Him, and was hoping to see some [miraculous] sign [even something spectacular] done by Him.  And he questioned Him at some length, but Jesus made no reply.  (Luke 23:8-9, AMP) 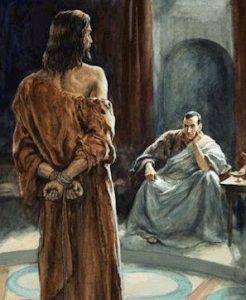 Just as words have power, lack of words can also have power.  Jesus said nothing before Herod, who had the power to spare His life.  Later, before Pilate, Jesus was also practically silent, offering few words that seemed to support His accusers instead of defending Himself.  Yet, His silence was powerful!

His silence led the Pharisees into overconfidence; they thought they had this trouble-maker cornered.  Jesus’ silence was not a signal of His defeat however, it was an expression of Authority.  Herod was not interested in anything Jesus had to say.  Herod wanted to see a miracle.  Jesus’ silence said that Herod had no power over Him.  Jesus had a greater authority.

Jesus silence spoke volumes – cliche, but true.  How can silence today be beneficial?  Herod and the Pharisees were bullies.  Bullies have never gone away and their tactics have not much changed, if at all.  They mock, they tease, they shout, they try anything and everything to get a response from you.  Silence, walking away without a word, is not weakness, but a sign of strength.

Silence can be used to ignite discussion.  Throughout history, many protests have used silence to argue for change.  Rosa Parks, and others, who refused to give up their seats on the bus; sit-ins at segregated restaurants; the Boston Tea Party; organized refusal to work to protest a law or working conditions; the medal stand protest at the 1968 Olympic Games; Colin Kaepernick, and other NFL players,

kneeling during the national anthem at NFL games – all are examples of speaking without saying a word.  All these events have led to national discussions of the issues being protested.

As Jesus demonstrated, there is a time for using words, and a time to use silence, the lack of words, to speak a message.