Christy Henrich was a little girl with a big a dream – she wanted to be an Olympic gymnast.  Her goal was the 1988 Olympic games.  From the age of four, she worked hard to accomplish that dream, spending hours everyday, perfecting every skill, every move, every toe point, every hand motion, every facial expression, every landing.  Leading up to the Olympics, it was suggested that she drop a few pounds.  She missed the Olympic team by a minuscule amount.  Christy, who already weighed less than 100 pounds, took the comments about her weight to heart, drastically reducing the amount of food she ate; sometimes less than an apple a day.  She never did achieve her dream.  Her change in lifestyle took a drastic toll on her body and on July 26, 1994, Christy died, at the age of 22, from multiple organ failure as a result of years of eating disorders.  She weighed just 47 pounds.

King David lusted after Bathsheba.  He acted on that lust, taking Bathsheba to his bed, resulting in her becoming pregnant.  But Bathsheba was already married to another man, a man who was a soldier and away at war.  Her husband would know the child was not his.  In an attempt to fix the problem both he and Bathsheba were now in, King David first attempted to trick Bathsheba’s husband into thinking the unborn child was his.  When that plan failed, King David order the man to the front lines of the war, where he would certainly be killed.  (2 Samuel 11)

Death and life are in the power of the tongue, and those who love it will eat its fruits.  (Provers 18:21, ESV) 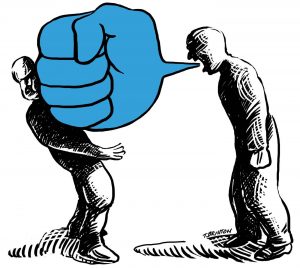 To properly use any muscle in our body, we must train it.  The tongue is no exception, and it can be the most difficult to train.  Our tongue, the muscle and instrument through which words are spoken, holds devastating power.  In our first lesson, we studied how our words can create.  In this study, we discover that our words also have the power to destroy.

Both of the above stories have tragic endings.  For Christy, it is impossible to know the intent behind the words spoken to her, but most likely, they were thought to be helpful – wanting to help a young girl achieve her dream.  Unfortunately, they were interpreted by a young girl in the worst way possible, leading to an obsession that ultimately cost Christy her life.  King David first tried to trick and deceive, before issuing what he knew was a death sentence.  King David knew he was sending the man to die in battle, because that man was in the way.  Words have the power to destroy.

There is one who speaks rashly like the thrusts of a sword, but the tongue of the wise brings healing.  (Proverbs 12:18, AMP)

We say approximately 15,000 words every day.  Do you honestly think about each and every word you say?  Do you think about the worst possible way your words could be interpreted?  Have you ever made a flip comment, thinking nothing of it, only to later find out it caused harm to another?

He who guards his mouth and his tongue guards himself from troubles. (Proverbs 21:23, AMP)

What about your comments on Facebook, Twitter, Instagram, Tumblr, or any where online?  Do you think about them?  Do you purposefully make hurtful comments, knowing you are safe behind an unknown user name?  Do you make comments that you would never say to someone in person?

While it is important to understand that Words Have Power (hence this year-long study), this particular lesson may be the most important of them all: Words can destroy!   It can be deliberate, as were King David’s words.  Or it can be unintentional.  But it highlights the importance of this lesson, and the overall theme of the year: Words Have Power.  Even innocent words, especially innocent words.