“I completely disagree!  Love and judgement can never go together!  Lovingly judge?  It’s an oxymoron!” The student speaking was known to only be in the class in order to graduate.  They viewed the class as a waste of time and made it known that they held an extremely low opinion of anyone who professed to be a Christian.  “The Bible says,”  “Where?” The professor quickly interrupted before the student could continue.  “You know the rule – no saying, ‘the Bible says.’”  “Right.”  The student quickly looked at their notes before restarting.  “Matthew 7:1 explicitly states, in Jesus’ own words, ‘Judge not.’  This statement is further backed up in John 8, when Jesus stops the men from killing the adulteress.  He says, ‘Let him who is without sin among you be the first to throw a stone at her.’  And in Romans 3:23 it says that, ‘all have sinned.’  Therefore, logically speaking, if everyone is a sinner, no one can judge the actions of another, just as Jesus says.”  “That is quite an interesting argument,” the professor commented.  “But does it hold up that love and judgement are mutually exclusive?  Let’s look.  Everyone, let’s start with John 8 – the story of the prostitute.”

Early in the morning he came again to the temple. All the people came to him, and he sat down and taught them. The scribes and the Pharisees brought a woman who had been caught in adultery, and placing her in the midst they said to him, “Teacher, this woman has been caught in the act of adultery. Now in the Law, Moses commanded us to stone such women. So what do you say?” This they said to test him, that they might have some charge to bring against him. Jesus bent down and wrote with his finger on the ground. And as they continued to ask him, he stood up and said to them, “Let him who is without sin among you be the first to throw a stone at her.” And once more he bent down and wrote on the ground. But when they heard it, they went away one by one, beginning with the older ones, and Jesus was left alone with the woman standing before him. Jesus stood up and said to her, “Woman, where are they? Has no one condemned you?” She said, “No one, Lord.” And Jesus said, “Neither do I condemn you; go, and from now on sin no more.”  (John 8:2-11, ESV) 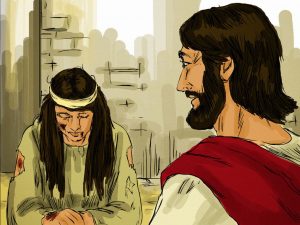 Jesus always condemned sin.  He never approved of it and He never looked the other way – for anyone.  He constantly spoke out about the improper teachings of the pharisees and how they had twisted Mosaic law to suit their purpose.  Yet, when they stand, ready to carry out a punishment for adultery given by God to Moses, Jesus stops them.  Why?

Some will interpret this passage along with others such as Matthew 7:1, as Jesus saying that if there is sin in your life, you cannot speak to others about their sin.  But that is not at all what is happening in this passage.  Jesus spoke out against the stoning because the punishment was not being applied properly.  What does Mosaic law say about adultery?  What is the punishment?

The man who commits adultery with another’s wife, even his neighbor’s wife, the adulterer and the adulteress shall most certainly be put to death.  (Leviticus 20:10, AMP)

Jesus stopped the pharisees from carrying out the punishment because they were not truly following the law.  The woman was caught in the act of adultery, which means the man must have been caught as well, but where is he?  Nowhere in this passage.  Only the woman was being punished, for a sin committed by two.

Look at Jesus’ final words to the woman in John 8:11: go, and from now on sin no more.  This is a sentiment often repeated by Jesus throughout the Gospels.  We known, from careful study of His life, that Jesus did not approve of the woman’s behavior, He did not support it.  Yet it was unjust for only her to face punishment for a sin that required two.

Today, we have changed the words, but kept the sentiment that Jesus showed: love for the sinner, hate for the sin.  Jesus loved the adulteress – He insisted that the law be fairly upheld.  Jesus hated the sin she had committed – He instructed her to do so no more.  This concept – love and sin – was discussed in our Journey of Love.  But let’s delve deeper. 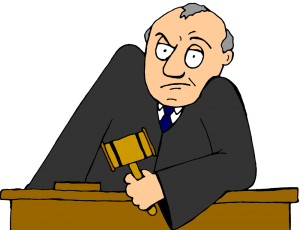 Loving sinners is not hard – we do it every day, often without realizing!  As the student pointed out all have sinned.  (Romans 3:23a, ESV)  Every single person we consider our friends, is a sinner.   Every family member, every acquaintance, every mentor.  Yet we maintain these relationships, and even aspire to be more like some of them!  Our continued relationship with them is a demonstration of our love for them, which can be expressed in many ways, including holding them accountable for their actions and helping them see the error of their ways – judgement.

In addition to love and sin, we are also now considering judging.  Is it truly possible to lovingly judge someone?  Jesus showed that it was.

Jesus entered Jericho and was passing through. A man was there by the name of Zacchaeus; he was a chief tax collector and was wealthy. He wanted to see who Jesus was, but because he was short he could not see over the crowd. So he ran ahead and climbed a sycamore-fig tree to see him, since Jesus was coming that way.
When Jesus reached the spot, he looked up and said to him, “Zacchaeus, come down immediately. I must stay at your house today.” So he came down at once and welcomed him gladly.
All the people saw this and began to mutter, “He has gone to be the guest of a sinner.”
But Zacchaeus stood up and said to the Lord, “Look, Lord! Here and now I give half of my possessions to the poor, and if I have cheated anybody out of anything, I will pay back four times the amount.”
Jesus said to him, “Today salvation has come to this house, because this man, too, is a son of Abraham. For the Son of Man came to seek and to save the lost.”  (Luke 19:1-10, ESV)

Tax collectors were despised during the time of Jesus, as they were known, as evidenced by Zacchaeus’ confession, to cheat the people and line their own pockets.  Jesus picking Zacchaeus out of the crowd, choosing to dine and stay with him, was an act of love.  An act of love that led to repentance and the righting of wrongs.  Jesus did not verbally condemn Zacchaeus’ actions (that is recorded), He did not force Zacchaeus to right the wrongs he had committed.  Jesus showed love to a sinner, inspiring Zacchaeus to be a better man.  The (recorded) judgement by Jesus showed forgiveness for a repentant man.

Jesus surrounded Himself with the sinners, those who needed Him most.  He showed love to them, but His teachings also make it clear that He did not approve of sinful lives.  In both actions and words, Jesus showed His love for the people, the individuals, and His teachings and condemnations of sin always came from the heart, from love.  Yes, Jesus would also get angry and speak harshly, especially to the pharisees and other religious leaders, but more was expected of them because they knew and studied the word of God.  And harsh words were never His first resort!

Jesus judged according to the knowledge of the sinner.  To those who were unaware of the sins they were committing, Jesus gently educated.  Jesus expected His lessons to be applied to lives of those that heard.  To those that could read the Book of Law, Jesus expected greater obedience to the Law, and had less patience for excuses and feigning ignorance. 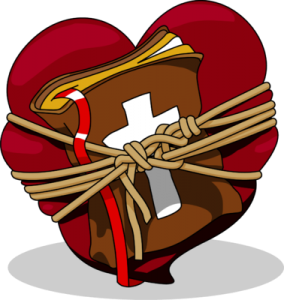 In today’s world, there are many extremely polarizing issues at the forefront: abortion, gay marriage, gender identity, religion, human rights, the role of government, etc.  Discussion around these issues often seems more centered on throwing insults over Twitter and through the news media, than actually talking about the issues.  How do you handle these issues?

We need to follow Jesus’s example of how to judge, when to judge, and even if we should judge.  Each social issue facing us today has a Biblical answer, if only one would study God’s word to find it!

“Do not judge, or you too will be judged. 2 For in the same way you judge others, you will be judged, and with the measure you use, it will be measured to you. (Matthew 7:1-2, NIV)

Yes, we are warned about judging others, criticizing the behavior and actions of others.  But we would be abdicating our duty to our fellow mankind if we saw sin and allowed it to continue and flourish without comment.  Jesus is warning us, though, that we should first examine our own lives.  Should an alcoholic call out another for excessive drinking?  What about a recovering alcoholic confronting an excessive drinker?  One is continuing to live in sin, while the other has repented and is actively working to change their life into one that is more pleasing to the Lord.

Jesus expressed His judgement differently to different people, depending on the circumstances.  We do not have Jesus’ infinite wisdom, which is why we must carefully consider how and when, and even if, we are to judge another.

To lovingly judge, lovingly critique another, is an extremely difficult aspect of following the Lord.  Ultimate judgement belongs only the Lord God, yet in order to help our fellow mankind further their relationship with Christ, we must be willing to lovingly point out sin where it is active.