Parable of the Tenants

33 “Listen to another parable: There was a landowner who planted a vineyard. He put a wall around it, dug a winepress in it and built a watchtower. Then he rented the vineyard to some farmers and moved to another place. 34 When the harvest time approached, he sent his servants to the tenants to collect his fruit.
35 “The tenants seized his servants; they beat one, killed another, and stoned a third. 36 Then he sent other servants to them, more than the first time, and the tenants treated them the same way. 37 Last of all, he sent his son to them. ‘They will respect my son,’ he said.
38 “But when the tenants saw the son, they said to each other, ‘This is the heir. Come, let’s kill him and take his inheritance.’ 39 So they took him and threw him out of the vineyard and killed him.
40 “Therefore, when the owner of the vineyard comes, what will he do to those tenants?”
41 “He will bring those wretches to a wretched end,” they replied, “and he will rent the vineyard to other tenants, who will give him his share of the crop at harvest time.”
42 Jesus said to them, “Have you never read in the Scriptures:
“‘The stone the builders rejected
has become the cornerstone;
the Lord has done this,
and it is marvelous in our eyes’?
43 “Therefore I tell you that the kingdom of God will be taken away from you and given to a people who will produce its fruit. 44 Anyone who falls on this stone will be broken to pieces; anyone on whom it falls will be crushed.”
45 When the chief priests and the Pharisees heard Jesus’ parables, they knew he was talking about them.  (Matthew 21:33-45)  (Also found in Mark 12:1-12 and Luke 20:9-19) 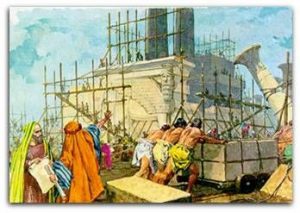 Nearly a thousand years before Jesus even began His ministry, King Solomon oversaw the contraction of the great Temple of Jerusalem.  Because it was a holy site, the construction had to be carried out quietly.  Therefore, all the stones for the temple were precut at a quarry before being brought to the site, where they would be fitted together.  One day, during the early part of the construction, an unexpected stone arrived at the site of the Temple.  The unlabeled, extremely large stone was a very odd shape and design.  The workers consulted their blueprints but were unable to determine where the stone fit into the overall design.  Determining that the stone cutters at the quarry had made a mistake, they hauled the misshapen stone off to the side, where it was to be disposed after the completion of the Temple.  Keep in mind, this was no small stone, it weighed 500 tons!!!

Work continued on the Temple, the huge misshapen stone laid forgotten, until the Temple was nearly completed.  Then they discovered that a key stone was missing, the cornerstone of the Temple.  Without this very specific, huge, stone, the Temple would not be complete.  The Temple would not stand on its own.  As the builders and the workers consulted their plans, someone remembered the stone they had discarded early in the building process.  Lo and behold!  That was the exact stone they needed!

So how does the reminder of the forgotten cornerstone of the Temple, related to the parable of the Tenants that Jesus had just told?  Understanding the parable of the Tenants is fairly straight forward.  The Lord had sent many messengers (prophets) to the people of Israel, many of whom were rejected.  Now, the Lord was sending His own Son, Jesus Christ, who, unbeknownst to those listening, would also be killed. 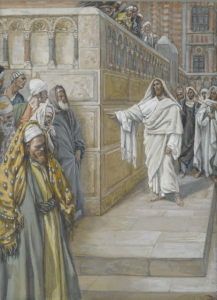 Jesus asked His audience to conclude the parable for Him; what would happen to those that killed the Son.  The audience recognized that those responsible for killing the Son would be punished in kind.  Jesus immediately follows up by bringing up the history of the forgotten cornerstone.  Jesus is acknowledging that He is the Son sent to die, the Son of God, the cornerstone of the Temple that has been cast aside and rejected.  Interestingly, chief priests and Pharisees recognized and connected the two stories.  Jesus was warning those who plotted against Him, He was warning the chief priests and Pharisees.  Instead of examining themselves and their beliefs, chief priests and Pharisees doubled down, determined to find a way to remove Jesus, the troublesome thorn in their sides, not accepting that they were throwing themselves upon the stone.

In our parable for study for the beginning of this month, the lesson being taught is one theological in nature, as opposed to a lesson in behavior given by most parables we have studied.  Jesus is the Son of God!  The chief priests and Pharisees, while understanding the meaning of the parable and history lesson, refused to accept the truth that was presented to them.  You must determine if you are going to make the same mistake in your life.

In developing our 2020 Vision for Christ, we can never forget that Jesus ultimately came to this earth to die.  His death was and is the ultimate sacrifice, meaning no other sacrifice would be needed.  Jesus’ death ripped the Temple curtain hiding the Holy of Holies in two.  We could now commune directly with the Lord.  Jesus was and is the Son of God!  He is the cornerstone of the new church!  Have you accepted this truth in your life?