“Oh come on!”  one junior erupted from the left side of the class.  “No Christian I’ve ever met has behaved that way!  They are either sanctimonious jerks, or they don’t care what the Bible says because God is going to forgive them anyway!”  The professor calmly waited for the student to finish before shocking everyone by mostly agreeing with the student.  “There are many people who say they are Christians yet do not love, as Jesus describes.  There are many proclaimed Christians who do not actually know the teachings of the Bible.  And there are those Christians who can quote the Bible chapter and verse, yet don’t follow or comprehend its teachings.  Why would that be?”  Another student jumped into the conversation.  “I was reading some of the letters that the Apostle Paul wrote to the early Churches – Ephesians, Galatians, Corinth – and it made me wonder what he would say to the churches of today.  I think Christians today and churches he wrote to have many of the same problems.”

With the “liberation” and “progress” of the past century has also come the moral decline of society.  Behavior that was completely unacceptable 5-10-15-100 years ago, has not only become commonplace and acceptable, but the norm!  Yet, according to a 2015 Gallup poll and data gathered by the Pew Research Center, 70-75 percent of the American population identifies themselves as Christians!

21 “Not everyone who says to me, ‘Lord, Lord,’ will enter the kingdom of heaven, but only the one who does the will of my Father who is in heaven. 22 Many will say to me on that day, ‘Lord, Lord, did we not prophesy in your name and in your name drive out demons and in your name perform many miracles?’ 23 Then I will tell them plainly, ‘I never knew you. Away from me, you evildoers!’  (Matthew 7:21-23, NIV)

If 70-75 percent of the American population had a strong, foundational relationship with Christ, we would not be experiencing the moral decay that is currently ongoing.  The definition of morality has definitely been changing, which can make the teachings of the Bible seem 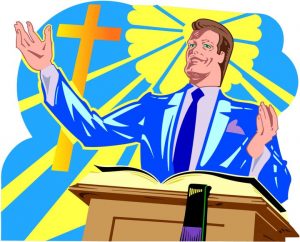 outdated, harsh, and even backwards from a worldly perspective!  This has given rise to “feel-good” pastors and churches, across all denominations.

These pastors and teacher may reference the Bible, but the passages are carefully selected, choosing only those that contain easy to follow instructions, and ignoring passages that pronounce judgement on behavior that is acceptable by the outside world, that would set them apart from the world, that could make it difficult to live in the world.  Or they may take passages out of context (often along with other passages) to pass over the judgement, saying it no longer applies.

“But watch yourselves lest your hearts be weighed down with dissipation and drunkenness and cares of this life, and that day come upon you suddenly like a trap. For it will come upon all who dwell on the face of the whole earth. But stay awake at all times, praying that you may have strength to escape all these things that are going to take place, and to stand before the Son of Man.  (Luke 21:34-36, ESV)

Jesus was awake.  From a young age, He knew why He was on this earth, as a man.  (BV Ref)  Although He was the Son of God and had armies of angels at His command, He knew He had to face His horrific and brutal death alone, as a man.  Jesus was awake.  Because He was awake, He knew what was coming.  Because He knew what was coming, he could prepare Himself, as all men must.  As His final battle approached, He turned more and more to the Lord, His Father, for His strength and guidance.  On His final night, He remained literally awake, as well as spiritually, seeking the comfort and guidance He needed.  Would Jesus have been able to withstand His trials, as a man, if He was spiritually asleep?

In contrast, disciples were asleep.  They were not prepared for what was coming.  Jesus implored them to stay awake in prayer, knowing they would need spiritual strength, more than physical strength, for the coming battles, but they did not hear.  And when the battle came, they fled.  They were filled with fear, uncertainty, and doubt.  Even Peter, who just hours before had promised to never desert the Lord, denied Him three times, out of fear.  (Luke 22:54-62)

8 Be alert and of sober mind. Your enemy the devil prowls around like a roaring lion looking for someone to devour.   (1 Peter 5:8, AMP)

Peter well-knew the consequences of not being alert and of sober mind.  Peter experienced first hand, at one of the most crucial times of his life, how easy it is for the devil to lead you astray.  Peter knew the importance of being awake!

Now, don’t start thinking that you need to forfeit sleep every night!  On His final night, Jesus implored the disciples to stay awake (physically) and pray.  But this is the only recorded instance of Jesus insisting that the disciples forgo sleep for prayer.  Physical rest is also important to being spiritually alert.

What type of church do you attend?  No, not the denomination.  Are you being taught from the Word of God?  The entire Word of God?  Do you walk away from each service confident that all is well in your life?  Or do you walk away convicted and knowing you are in need of change?  Spend time in prayer and contemplation.  Discover the Lord through His word!  Surround yourself with genuine believers to uplift and encourage you during times of trials, and to rejoice with you during time of good cheer!