“Isn’t Romans 12:2 where the saying, ‘in the world but not of the world comes from?’  I don’t understand.  I mean, unless you are a hermit or weirdo living off the grid in the middle of nowhere, you participate in some form of society everyday.  How can you say your are not part of the world?  Should Christians be shunning all technology?”  The class laughed at the description, with many nodding in agreement to the question.  The professor waited for the class to calm down, with a small smile on his face. “When you study Shakespeare, or English Lit, you examine words, look at the context in which they were written, put them in their place in time, and extrapolate the meaning of the phrase, paragraph, or scene from all the contextual clues.  You examine the text in the original language, and/or a different translation.  The Bible is no different.  Contextual clues are important, as is knowing the writer and audience.  Finally, the words themselves are important, the exact words.  So, let’s open our Bibles to Romans 12:2, and we will compare your translation to mine.”

Do not conform to the pattern of this world, but be transformed by the renewing of your mind. Then you will be able to test and approve what God’s will is—his good, pleasing and perfect will.   (Romans 12:2, NIV)

And do not be conformed to this world [any longer with its superficial values and customs], but be transformed and progressively changed [as you mature spiritually] by the renewing of your mind [focusing on godly values and ethical attitudes], so that you may prove [for yourselves] what the will of God is, that which is good and acceptable and perfect [in His plan and purpose for you].  (Romans 12:2 AMP)*

The phrase mentioned by the student, “In the world, but not of the world,” does not appear anywhere in the Bible.  But it is a phrase adopted and used by many Christians.  For those unfamiliar with God’s word, the phrase, “In the world, but not of the world,” can seem like an oxymoron.  Like the student said, everyone is part of the world – everyone participates in society, requires money to exchange for goods and services, is dependent upon the government for various needs, and interacts with different people everyday.  But in this phrase, “the world” is not a reference to where we live.  “The world” is a reference to everyone who is not a follower of Christ.  We live in a world of unbelievers, but we are not part of the unbelievers. 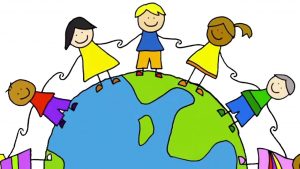 Followers of Christ co-exist and interact with nonbelievers everyday.  What the phrase, and, more importantly, the Bible, is referring to, is how we interact with world.  In Romans, Paul calls upon the reader to focus upon the Lord.  He should be the first thought in your mind.  Your actions should serve to please Him.  We should not allow ourselves to become distracted or consumed with the latest shiny object – a new electronic device, a recent movie or television show, the latest fashion statement.  There is a time and place to allow those things – for they are just temporary things – into your life, but it cannot interfere or distract you from your work from the Lord.  By placing God first, you will, eventually, come to recognize when it is acceptable.

6 For you are a people holy to the Lord your God. The Lord your God has chosen you out of all the peoples on the face of the earth to be his people, his treasured possession.  (Deuteronomy 7:6, NIV)

God continually reminded the Israelites that they had been set apart.  He had chosen them to inherit the Promised Land.  He loved them and blessed them.  In return they were to only worship Him and remain loyal to Him.  They were not to intermarry and become corrupted by other nations who did not follow the Lord.  What happened when they fell away from the Lord?

Jesus, again, reiterates the message from the Old Testament.  Jesus was born into the world, He became part of the world, yet He was not of the world.  Jesus threw off the temptations offered by Satan in the desert.  Jesus refused to be led astray, He refused to make peace and tolerate false teachers.  Jesus stood up to those who were wrong, He spoke to all who were willing to hear the truth, and to those who were unwilling to hear!  Jesus disrupted the status quo, and the pharisees and other religions leaders hated Him for it.  Jesus is the example we are to follow!  We are to stand up for what is right, defend the defenseless, call out injustices where we see them.  And if we follow the example of Jesus, should we not except the same result – hatred?

4 You adulterous people, don’t you know that friendship with the world means enmity against God? Therefore, anyone who chooses to be a friend of the world becomes an enemy of God.  (James 4:4, NIV)

The Apostles James and John both expand upon what the Apostle Paul wrote in Romans.  Sin is easy.  Living like the world, nonbelievers, is easy.  Accepting Jesus Christ as our Lord and Savior expresses a desire and a commitment to give up sin, give up living life as the world lives life.  It is a desire and commitment to living a life for the Lord.

Nearly all the problems faced by the Israelites in the Old Testament were a direct result of stepping away from the Lord, of giving into the world, loving worldly things, and pursuing those desires.  The same holds true today.  Our problems are not given to us by the Lord, they come from sin in the world. 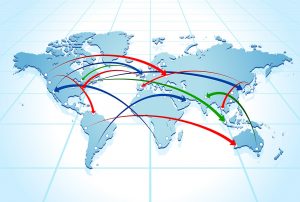 Now, some might start to wonder, if sin is the problem, wouldn’t it be better to avoid the world of unbelievers as much as possible?  Surround yourself with other Christians and live a peaceful life, following God and obeying His laws.  It sure sounds nice!  Throughout history, it has been tried by various groups – some, such as the Amish, continue to try today.  But, especially in today’s world, it is impossible to be completely set apart.  Further, we must once again look to the ultimate example of living a Christian life in the world.  What did Jesus do?

Jesus gave us our mission – a mission which requires us to be involved in the world, to interact with unbelievers.  We are to seek them out, and share God’s word with them, in the hopes that they too may, one day, make the decision to also no longer be part of the world.

*In the Amplified Bible translation, additional details or descriptions are put into brackets to help the reader better understand the original intent of the author.