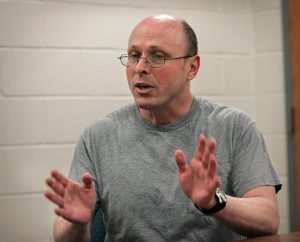 Carey Dean Moore was executed by the state of Nebraska on Tuesday, August 14, 2018. He was pronounced dead at 10:47 am CDT, inside the execution chamber at the Nebraska State Penitentiary in Lincoln, Nebraska. Carey was 60 years of age. He was executed for the murders of Reuel Eugene Van Ness, Jr., on August 22, 1979, and Maynard Helgeland on August 27, 1979. Both murders occurred in Omaha, Nebraska. Carey spent the last 38 years of his life on Nebraska’s death row.

Carey had a difficult childhood growing up. His father beat him as a child with electrical cords and leather straps. He did not have a stable home, as he was in and out of foster care as a child. He was also frequently in trouble. At the time of the murders, Carey claims that he was under the influence of tranquilizers.

According to Carey Moore, on August 22, 1979, he and his 14-year-old brother were out when he decided to rob a cab driver. When the cab driver, Reuel Eugene Van Ness, Jr., stopped his vehicle, Moore pointed an automatic gun at his head and demanded money. Moore insists that Reuel instead reached for the gun and it went off. Reuel was shot three times: once in the hand, once near his spine, and once in his head. Moore and his brother dumped Reuel, who was still alive, in a parking lot and wiped down the cab, attempting to erase evidence that they had been there.

Five days later, on August 27, 1979, Moore, this time alone, flagged down another cab. The driver was Maynard Helgeland. After arriving at the destination, Moore shot Maynard three times in the head. Moore, along with his younger brother, were arrested two days later. Moore was sentenced to death in 1980.

During his early years in prison, Carey Moore attempted to escape death row by trading clothes with his twin brother David, who was also incarcerated. The escape attempt failed.

The last execution that occurred in Nebraska was in 1997, and carried out electrocution. Carey is the first to be executed in the state using lethal injection. He was executed using a four-drug cocktail that included fentanyl. It was the first execution in the United States to use fentanyl. The other drugs used were diazepam, cisatracurium, and potassium chloride.