“If you take no risks, you will suffer no defeats.  But if you take no risks, you win no victories.”  He was the first president to visit China, to meet with a Japanese monarch, and to address the Russian people on Russian television.  His sideburns were dyed to hide the fact his hair was turning gray.  His favorite food was cottage cheese with ketchup on it.  He is Richard Milhous Nixon, 37th President of the United States from January 20, 1969, to August 9, 1974.  Richard was born on January 9, 1913, in Yorba Linda, California, the only president to be born in California. 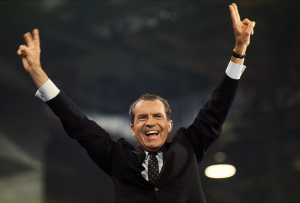 As a child, Richard worked in his parent’s grocery store/gas station.  He attended Whittier College before earning a scholarship to Duke University Law School.

He married his wife, Thelma “Pat” Ryan on June 21, 1940, in a Quaker service.  Richard was only one of two Quaker presidents.  Richard also served in the United States Navy during World War II, where he did not see combat but did learn to play poker, a game he thoroughly enjoyed and later used to help finance his political endeavors.

His political career began in 1946, when he, at the suggestion of a friend, ran for Congress.  He narrowly defeated his opponent, incumbent Democrat Jerry Voorhis.  In 1948, Richard gained national attention for his investigation into Alger Hiss.  Alger, a former State Department official had been accused of being a Soviet spy.  Richard pressed the House Un-American Activities Committee, of which he was a member, to continue its investigation.  Eventually, the allegations against Alger were proven true and Alger was convicted.

In 1949, Richard ran for the Senate against Helen Douglas.  In a campaign that focused on the Korean War, Richard won the election by nearly 20 percent.  During his time as a senator, he supported statehood for Alaska and Hawaii, civil rights for minorities, federal disaster relief for India and Yugoslavia, and opposed communism and benefits for illegal immigrants.

Richard was nominated to be vice-president for General Dwight D. Eisenhower in 1952.  Despite the controversy surrounding Richard during the election regarding his campaign funds, Dwight and Richard were elected.  During his time as vice-president, Richard increased his devotion to foreign relations and, with the support and encouragement of the president, increased the responsibility of the vice-presidency.  In 1955, Richard acted as president while Dwight recovered from a heart attack.  He then swiftly returned power to Dwight, actions which drew high praise.  In 1956, the pair was re-elected.

In 1960, Richard mounted his own campaign for the presidency.  His opponent was democratic candidate John F. Kennedy.  During this campaign, a new medium entered the campaign trail: televised debates.  In the first debate, radio listeners believed that Richard won the debate.  Television viewers, on the other hand, believed the photogenic Kennedy won the debate, where Richard appeared pale, nervous, and with a five-o-clock shadow.  This debate is believed to have greatly assisted in Kennedy’s narrow win.

In 1962, Richard was encouraged and ran for Governor of California.  He lost the election by over five percent and blamed the media for favoring the opponent.  Richard believed his political career was over, however public sympathy for him grew, especially after a news program had Alger Hiss appear and attack Richard.  Public outrage drove the program from the air, as it was viewed as unseemly to allow a convicted felon to attack a former vice president.  Richard and his family moved from California to New York, where Richard became a senior partner in a prominent law firm.

Although Richard did not intend to run again for president, the disastrous election for Republicans in 1964, began to change his mind, as he was one of the few not blamed for the disaster.  By 1967, Richard had decided to seek the presidency, with Spiro Agnew as his running mate.  Richard won the election.

The dominating problem during Richard’s presidency was the Vietnam War.  Approximately 300 soldiers were dying every week when Richard took office and public support was against further war efforts.  Richard decided to withdraw American troops from South Vietnam while having the Air Force bomb Laos and Cambodia.  He replaced American soldiers with Vietnam soldiers.  But, to the dismay of the public, President Richard Nixon began sending troops into Laos and Cambodia, causing protests and strikes across the country.  Domestically, the war caused inflation to rise.

Richard won his re-election in a landslide – 520 to 17 electoral votes.  Polls before the election also indicated that Richard would easily win.  However, Richard’s re-election campaign was concerned about the Democratic candidate and broke into the Democratic National Election Headquarters in the Watergate complex.  The following scandal that ensued is known as the Watergate Scandal.  Although Richard attempted to downplay the event, the press ran with the story and an investigation ensued.  Eventually, it was proven that President Richard Nixon had been made aware of the break-in and assisted in its cover-up.  Amid calls for his impeachment, Richard chose to resign on August 9, 1974, passing the presidency to his new vice-president Gerald Ford, who replaced Spiro Agnew, who resigned for reasons unrelated to Watergate.  Richard’s final meal in the White House included cottage cheese and pineapple slices.

In September of 1974, President Ford granted Richard a “full, free, and absolute pardon,” after which, Richard released a statement apologizing for his actions.

After leaving the White House, Richard maintained many of his foreign relations contacts, especially with China.  He gradually worked his way back into public life and wrote ten books during his retirement.  He supported Ronald Reagan’s run for the presidency and spent much time traveling and meeting with foreign leaders.  His advice was also sought after by current presidents, including Bill Clinton whose wife had served on the committee that voted to impeach Richard.