“Hope is that thing inside us that insists, despite all evidence to the contrary, that something better awaits us it we have the courage to reach for it and to work for it and to fight for it.”  He is one of three presidents to have won a grammy, although not for his singing.  He does not like ice cream after having worked at a BaskinRobins during his youth.  He has read every Harry Potter book. He is the first president to tweet and is most well known for being the first African American president.  He is Barack Hussein Obama, 44th President of the United States, serving from January 20, 2009, until January 20, 2017.  Barack was born on August 4, 1961, and is the first president to have been born outside the continental United States, in Hawaii.  When he was two years of age, his parent divorced.  Barack spent his early childhood in Hawaii being raised by his maternal grandparents, while his mother completed college.  When his mother remarried, they moved to Indonesia.  A few years later, Barack returned to Hawaii to, once again, live with his grandparents and attend school. 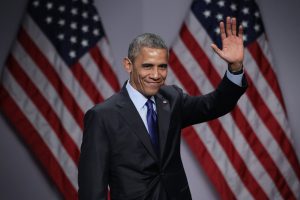 Barack attended Occidental College for two years before transferring to Columbia University, where he graduated in 1983.  After working two years in New York, Barack moved to Chicago, Illinois and began working for the Developing Communities Project.  After a visit to Kenya where he visited the graves of his father and grandfather, Barack decided he wanted to become a lawyer and entered Harvard Law School, where he graduated in 1991, after becoming the first African American to be elected editor of the Harvard Law Review.  After graduating from Harvard, Barack married Michelle Robinson in 1992.  The couple returned to Chicago where Barack briefly worked for a law firm, taught at the University of Chicago, and did advocacy work, which led him to pursue and win a seat in the State Senate in 1996.

Barack also entered office while the economy was in a recession, which prompted him to sign an economic stimulus package aimed at helping the United State recover.  Barack has also worked at creating jobs and has advocated for a higher minimum wage.  Throughout his presidency, Barack has also advocated for increased gun control, especially following several mass shootings.

President Obama’s signature legislation, the Affordable Care Act (a/k/a ObamaCare), was passed in 2010, with the promise that it would help lower health insurance premiums and grant coverage to millions of uninsured individuals.  The effects of the bill remain disputed.  The bill has been highly controversial and there has been numerous attempts to overturn the bill.  The Supreme Court of the United States has upheld the constitutionality of the bill several times.

In late 2010, Barack repealed the “Don’t Ask, Don’t Tell” police of the United States Armed Forces.  He also began speaking in favor of legalizing gay marriage, praising the Supreme Court decision doing so in 2015.  Barack became the first president to mention gay rights in an inaugural address in 2013.

In 2008, Obama ran on the platform of “Hope and Change,” a promising idea during a tumultuous time in world history.  The world continued to change while he was in office, and it will be years before history can truly judge his actions, for better or worse.

Although raised by individuals who did not regularly attend church, Barack, by his own admission, eventually came to understand the importance of religious tradition, specifically how African-American religious traditions spurred social change.  In 2008, Barack stated, “I am a devout Christian.  I believe in the redemptive death and resurrection of Jesus Christ.  I believe that faith gives me a path to be cleansed of sin and have eternal life.”