“I can express no better hope for my country than that the kind Providence which smiled upon our fathers may enable their children to preserve the blessings they have inherited.”  He is the only president to give his inaugural address from memory, without notes.  He was accused of running over a women with his carriage in Washington, DC, although the charges were later dropped.  He always dressed in black and battled with alcoholism for many years, taking its toll on his health.  He is Franklin Pierce, 14th President of the United States of America, serving from March 4, 1853, until March 4, 1857.  Franklin was born on November 23, 1804, in a log cabin in Hillsboro, New Hampshire, the only president to be born in New Hampshire, and the fifth of eight children.  Franklin was the first president born in the 19th Century and one of six presidents born in a log cabin.  His father served as a lieutenant in the Revolutionary War and was active in politics during Franklin’s childhood.  Franklin was well-educated throughout his childhood, although he did not favor school.  Nonetheless, Franklin went from a local school, to Phillips Exeter Academy (a college prep school), to Bowdoin College in Brunswick, Maine.  While at college, Franklin became friends with Jonathan Cilley (later elected to Congress) and Nathaniel Hawthorne (an author).  After the first two years, he was last in his class.  He worked hard, improved his grades, and graduated fifth in his class. 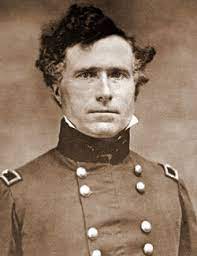 Franklin went on to become a lawyer, being admitted to the bar in 1827, after which, he went on to lose his first case.  Just like in school, Franklin dedicated himself to his profession and proved himself a capable lawyer, despite never being a legal scholar.  In 1828, Franklin won his first political appointment, town moderator for Hillsborough, New Hampshire.  He would be elected to that position for six consecutive years.  The following year, at the age of 24, he was elected to the State House of Representatives, where he was elected Speaker of the House in 1831.

In 1832, Franklin was nominated by the Democratic Party for one of New Hampshire’s five seats on the US House of Representatives.  He was sworn in December of 1833, delayed by his pending marriage.  On November 19, 1834, Franklin married Jane Means Appleton, the daughter of a Congregational minister and former president of Bowdoin College, to whom he had been engaged to for eight years.  She was deeply religious and encouraged Franklin to abstain from alcohol.  The couple had three sons, all of whom died in childhood.  Franklin was also a member of the state militia at this time, where he remained until 1847.  While in the militia, he achieved the rank of colonel.

Both Franklin and his wife despised life in the nation’s capital, preferring to live in their home in Concord, New Hampshire.  However, Franklin continued to seek political appointment.  He was easily re-elected as a Representative, even though he did not always vote along party lines.  When not in Washington, DC, Franklin resumed his law practice.

During his second term in the mid-1830s, abolitionism was growing in popularity.  Although personally opposed to slavery, considering it “a social and political evil” that he wished “had no existence upon the face of the earth,” Franklin also believed that any federal action would infringe upon states’ rights.

In 1836, at the age of 32, Franklin was elected US Senator from New Hampshire, one of the youngest members in the Senate at that time.  Franklin did not dominate in the Senate and was often overshadowed.  He typically voted with the Democratic Party and supported President Martin Van Buren.  During his brief time in the Senate, Franklin opposed federal money supporting banks and the creation of a national bank.  Franklin left politics in December of 1841, returning the New Hampshire and his law practice.  However, he remained politically active.  During the Mexican-American War, he joined the Army, rising to the rank of brigadier general.  During a battle, Franklin injured his leg, causing him to miss the final battle of the war, and leading to claims of cowardice.

Franklin returned from war and resumed his law practice and re-entered politics.  As the 1852 presidential election approached, there was no clear leader in the Democratic party.  Franklin spoke out against those who wished to nominate him for President, saying such action would be “utterly repugnant to my tastes and wishes.”  Franklin was a party leader in his state, but not well-known nationally, as he had not held an elected office in over a decade.  Franklin gained the Democratic Presidential nomination after the 49th round of voting, which placed him against his former commander, General Winfield Scott of the Whig Party.  Franklin’s wife fainted when she heard that her husband had actually received the nomination!

One of the reasons for Franklin’s candidacy was due the fact that he was a Northern who did not support the Federal government declaring slavery illegal.  Franklin was overwhelming elected President in 1852.  Unfortunately, several weeks, after his election, Franklin’s only surviving son was crushed to death and nearly decapitated after a train accident.  Franklin and Jane both suffered from depression following his death.  Jane did not attend Franklin’s inauguration.  Franklin, who at the time was the youngest president to take office, was not sworn in using a Bible, rather he affirmed the position using a law book.  During his inaugural address, Franklin refused to use the word “slavery.”  He also alluded to the tragedy that had befallen his family, stating “You have summoned me in my weakness, you must sustain me by your strength.”

Franklin appointed a politically diverse cabinet that was unanimously approved by the Senate.  Franklin was the only president who had no cabinet turnover during his time in office.  Due to this diversity, both the northerners and southerners accused Franklin of supporting the other side.  Neither side was happy with Franklin’s handling of the slavery issue, especially during the admission of Kansas and Nebraska to the nation, which allowed the voters of the new states to determine the issue of slavery.  This action led to violent altercations between slavery supporters and opponents.

Franklin was the second president to not have a vice-president during his time in office, as his running mate died before assuming the office.  During his time as president, Franklin helped develop the foundation of what would become the Justice Department, by expanding the role of the Attorney General and appointing federal judges and attorneys.  He also appointed people to reform the Interior Department and the Treasury, which had been mis-managed and had many unsettled accounts.  During his time as President, construction began on the Washington Monument.

Franklin was surprised when he was not nominated for re-election, but ultimately supported the man nominated in his place.  After leaving the presidency, Franklin and his wife spent several years traveling abroad in Europe and the Bahamas, including a visit to author Nathaniel Hawthorne, with whom he spent considerable time.  Franklin remained knowledgeable about the political situation and opposed President Abraham Lincoln’s decision to force the South to return.  Franklin received significant negative press for his views and opinions.  Franklin had also been a close friend of Confederate president Jefferson Davis. Following Lincoln’s assassination, Franklin was mobbed at his home, as many were upset that he did not publicly display his grief.

In the later years of his life, Franklin again struggled with alcohol and became more religious, as he had greatly struggled with his faith following the death of his son shortly after his election.  On the second anniversary of his wife’s death, Franklin was baptized Episcopalian.  Franklin died on October 8, 1869, during the early morning.  Although Franklin had a colorful and controversial political career, President Grant declared a national day of mourning.