“There is more selfishness and less principle among members of Congress, as well as others, than I had any conception of, before I became President.”  At the age of 17, he had surgery to remove urinary stones without any pain killer, except whisky.  He was a slave owner who served as a colonel in the Tennessee militia.  Due to working considerably long hours while president, he was considered a workaholic.  He is James Knox Polk, 11th President of the United States, serving from March 4, 1845, until March 4, 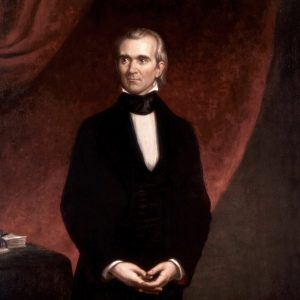 1849.  James was born on November 2, 1795, in Mecklenburg County, North Carolina, as the first of ten children.  James’s mother and father were both Presbyterian.  James initially rejected religion but eventually became a Methodist.  He continued to attend Presbyterian services, for his mother, and later, his wife.

James had health problems growing up, leading to him being homeschooled.  After recovering from surgery at the age of 17, he enrolled in Zion Church, before attending Murfreesboro.  In January 1816, he transferred to the University of North Carolina as a second-semester sophomore.  During college, he participated in a debate club.  He graduated with honors and began studying law under renowned attorney Felix Grundy.  James went on to have a short, but successful law career.  At the same time, he also served as a clerk for the Tennessee State Senate.

In 1822, James joined the Tennessee militia as a captain and was eventually promoted to colonel.  That same year, he resigned his position as Senate clerk to run for the Tennessee state legislature.  He defeated the incumbent.  James supported Andrew Jackson’s bid to become the United States Senator from Tennessee.  James would continue to firmly support Andrew.

On January 1, 1824, James married Sarah Childress.  They had no children together, possibly an unfortunate result of the surgery James had as a teenager.  He is one of three presidents to not have any children.  Sarah supported James throughout his political career, assisting him with speeches and giving advice on policy.  She also actively campaigned with him.

In 1825, James ran for a seat in the United States House of Representatives, which he won.  He went on to serve for over 10 years, becoming Speaker of the House.  James supported Andrew Jackson during his failed 1824 presidential run.  He again supported Andrew in 1828, giving Andrew advice on his campaign.  James used his position as Speaker to support the policies of Andrew and, later, Martin Van Buren.  No matter how many times James was insulted, he never once challenged his accuser to a duel, as was common at the time to defend one’s honor.  James is the only Speaker to go on to become president.  James left the House of Representatives to run for Governor of Tennessee in 1839.  He served for one term and failed to be re-elected.

During the nomination for the 1844 Presidential election, James simply hoped for a vice-presidential nomination.  James emerged as a “dark horse” after the two front runners failed to gain enough support to win the nomination.  His nomination was likely helped by the support of Andrew Jackson, as both supported westward expansion.  James won the democratic nomination for President and then the Presidential election, even though he was considered a long shot.  He was 49 years of age and the youngest president in American history at the time.  Theodore Roosevelt would go on to become the youngest president at the age of 42.

President James Polk had his inauguration address tapped out on telegraph by Samuel Morse, the inventor of the telegraph.  He was also the first president to have “Hail to the Chief” played when entering the room on formal occasions.  This may have been the work of his wife, who wanted to ensure everyone knew when the five-foot-eight-inch president entered the room.

James had a very successful presidency, fulfilling all five of his campaign promises: acquiring California and New Mexico from Mexico, settling the Oregon dispute and acquiring some or all of Oregon Country, reducing tariffs, establishing a sub-treasury, and retiring after four years.  The Oregon territory was occupied by England, which was reluctant to give up its claim.  President James Polk threatened war, which he did not want, and demanded all the Oregon territory.  A satisfactory agreement was eventually

reached between the nations.  Negations with Mexico for California and New Mexico did not go as smoothly, leading to the Mexican-American War.  A peace treaty was signed in 1848, which included the acquisition of what would become California, Nevada, Utah, most of Arizona, and parts of New Mexico, Colorado, and Wyoming.

James also attempted to purchase Cuba from Spain, but his offer was rejected.  Additionally, President James Polk oversaw the establishment of the United States Naval Academy, signed the bill that created the Smithsonian Museum, created the Department of Interior, and supported the acquisition of Texas, which became a state during his presidency.  He banned hard liquor and dancing at the White House.

James was the first president to voluntarily retire after one term.  That one term took its toll on James’ health, as he emerged having lost weight and with deep lines and circles under his eyes.  He worked exceeding hard, noting in his diary that, “No president who performs his duties faithfully and conscientiously can have any leisure.”

He died three months after leaving office, on June 15, 1849, in Nashville, Tennessee.  James died of cholera, which he is believed to have contracted while visiting New Orleans, Louisiana on a goodwill tour after leaving the White House.  His final words were to his beloved wife: “I love you, Sarah.  For all eternity, I love you.”  At 103 days, James had the shortest retirement of any president and was the youngest president to die in retirement at the age of 53.  He is one of six presidents to die while their successor was in office.