“The most terrifying words in the English language are: I’m from the government and I’m here to help.”  For seven summers, he worked as a lifeguard, making a total of 77 rescues.  He had a fear of flying.  He is the only man to have served as President of the United States and president of a union.  Three and one-half tons of jelly beans, his favorite candy, were shipped to the White House for his inauguration.  He is Ronald Wilson Reagan, 40th President of the United States, serving from January 20, 1981, to January 20, 1989.  Ronald was born in Tampico, Illinois on February 6, 1911, to a poor family, with an alcoholic and frequently unemployed father.  He did not excel in school, earning average grades at Eureka College in California, where he majored in economics, one of three presidents to do so. 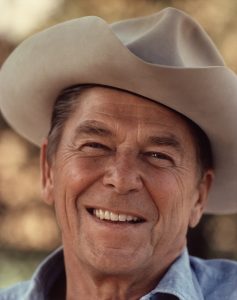 Ronald, unlike most presidents, did not pursue a career in politics at an early age.  Instead, Ronald set out to become an actor.  He appeared in 53 movies and several television shows, earning his nickname “The Gipper” from one of his more memorable roles.  Just as Ronald appeared to be becoming a star, he was ordered to active duty with the US Army in World War II.  Ronald never served overseas due to his poor eyesight, however, he kept a film roll of the war, specifically depicting the liberation of Auschwitz, because he believed that one day, people would doubt that the Holocaust had ever occurred.  After the war, Ronald never regained his film stardom, although he went on co-star in several other films.

Ronald married his first wife, Jane Wyman, on January 26, 1940.  They divorced nine years later, although they remained friends until his death.  Ronald is one of two presidents who have ever been divorced.  Ronald met his second wife, Nancy Davis in 1949.  They were married on March 4, 1952, and had two children together.  During his presidency, Ronald and Nancy were known to be very affectionate towards one another and had special names for each other.

Ronald spent much of his early life as a democrat.  His first major political movement was a desire to lead an anti-nuclear rally in Hollywood, although he was told not to by the movie studio for which he worked.  For many years, Ronald supported the democratic party, although he began to have more conservative views as his relationship with Nancy, a Republican, continued, and through his work with General Electric.  In 1962, Ronald formally switched to the Republican party stating, “I didn’t leave the Democratic Party.  The party left me.”

On October 27, 1964, Ronald gave a memorable speech, in which he revealed his support for a smaller government.  This speech impressed many people, who encouraged him to run for governor of California, launching his political career, in 1966.  He defeated the incumbent by promising “to send the welfare bums back to work,” and to clean up the University of California at Berkeley.  Two years later, in 1968, Ronald, unsuccessfully, first attempted to run for President.

While Governor, Ronald had to contend with several protests, including one that became known as “Bloody Thursday.”  Also while governor, Ronald signed the “Therapeutic Abortion Act,” allowing abortions for the well-being of the mother.  Ronald later stated that he regretted signing the bill and, had he been more experienced, he would not have, as it resulted in two million abortions.  Ronald later stated that he was pro-life.

He was re-elected in 1970, but choose not to seek a third term.  One of Ronald’s greatest frustrations while the governor was his lack of ability to enforce capital punishment, which he strongly supported.  Only one execution was carried out during his time as governor.  Ronald’s inability to carry out executions was largely due to a California Supreme Court ruling that invalidated all death sentences issued before 1972.  That ruling was later overturned by a constitutional amendment.

In 1976, Ronald ran for the Republican presidential nomination against incumbent President Gerald Ford.  Although a close race, Ford eventually won, although he would ultimately lose the election to Jimmy Carter.  Over the next four years, Ronald remained in the public eye through various means and won the Republican nomination in 1980.  Ronald appointed George HW Bush as his running mate.  The two emphasized lower taxes, states’ rights, smaller government, a strong national defense, and restoring the US Dollar to a gold standard.

President Ronald Reagan pursued issues that reflected his personal belief in individual freedoms.  During his time in office, Ronald reinvigorated the American economy, decreased reliance upon the government, and continually advocated for prayer in school, later calling for a moment of silence, to be reinstated (it had been banned by the Supreme Court in 1962).

Sixty-nine days into his first term, on March 30, 1981, President Ronald Reagan was outside of the Washington Hilton Hotel, when he was shot at by John Hinckly, Jr., who thought doing so would impress actress Jodie Foster.  John fired six times.  He hit White House Press Secretary James Brady in the head, leaving him paralyzed and leading to his death in 2014.  Police Officer Thomas Delahanty was struck in the back of the neck as he protected the president.  Secret Service Agent Timothy McCarthy was struck in the abdomen as he covered President Ronald Reagan.  One bullet hit the window of the building across the street and another bullet hit the bullet-resistant glass of the presidential limousine.  The final bullet ricocheted off the side of the limousine and hit the underarm of Ronald’s left arm, grazed a rib, and lodged in his lung, approximately one inch from his heart.

It was not immediately realized that Ronald had been struck by a bullet, as it was initially thought that he was injured from being roughly shoved into the vehicle.  After he began coughing up blood, the Special Agent in Charge ordered that Ronald be taken directly to the George Washington University Hospital, an act that likely saved his life.  Ronald survived the shooting, making him the first president to survive being shot in an assassination attempt.

President Ronald Reagan easily won a second term, winning 49 out of 50 states, losing only Minnesota, the state of his opponent, by less than 4,000 votes.  He also achieved 525 electoral votes, the most of any President.

In addition to domestic economic problems and the War on Drugs, Ronald also faced international problems, such as the Cold War, attacks on American troops in Beirut as part of the Lebanese Civil War, a Marxist-Leninist takeover in Grenada, a bombing in Libya, the Iran-Contra affair, and an attempt to end communism by challenging Mikhail Gorbachev to “tear down this wall!” referencing the Berlin Wall.

During his second term, Ronald began having health problems.  He began wearing hearing aids in both ears, the first president to do so.  He also underwent numerous surgeries to remove potentially cancerous cells from his nose.  On July 13, 1985, Ronald surrendered presidential power to his vice-president, Georgia HW Bush, and underwent surgery to remove cancerous polyps from his colon.  The surgery was successful and Ronald resumed his presidential power later that day.  Ronald was the first president to appoint a female justice, Sandra Day O’Conner, to the Supreme Court.

After Ronald left office, he continued to speak on behalf of the republican party.  At the dedication to the Ronald Reagan Presidential Library, five presidents and six first ladies were in attendance, the first time five presidents were gathered in a single location.  In 1994, Ronald was formally diagnosed with Alzheimer’s disease.   Ronald died of pneumonia at his home in Bel Air, California on June 5, 2004, at the age of 93.  At the time of his death, he was the longest living President, surpassing John Adams, although Ronald has since also been surpassed.  At his burial site is inscribed the words he stated at the opening of his library: “I know in my heart that man is good, that what is right will always eventually triumph and that there is a purpose and worth to each and every life.”