“We have always held to the hope, the belief, the conviction that there is a better life, a better world, beyond the horizon.”  He enjoyed snacking on fruit cake.  He also enjoyed eating pancakes, fish, cabbage, and sweet potatoes with marshmallows on top. It was the first time a presidential candidate had his mother eligible to vote for him.   He is Franklin Delano Roosevelt a/k/a FDR, 32nd President of the United States of America, 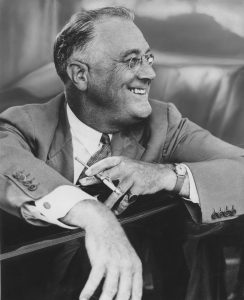 serving from March 4, 1933, to April 12, 1945.  Franklin was born on January 30, 1882, in Hyde Park, New York, and was an only child.  Due to his mother, he spent the first five years of his life wearing dresses!  He visited Europe every year growing up and was educated by tutors and governesses.   At the age of 14, he began attending a prestigious school in Massachusetts.

After graduating from high school he attended Harvard College before going to Columbia University Law School.  While attending college, his fifth cousin, Theodore Roosevelt was elected President.  Although Franklin supported Theodore’s opponent, he admired Theodore’s leadership style.  Franklin married his wife, Eleanor, on March 17, 1905, over the protests of his mother, who was a dominant figure in his life.  They had six children together, five of which survived into adulthood.  Franklin and Eleanor’s marriage was not a happy one though.  Franklin had several affairs and once considered divorce.  His marriage to Eleanor became a political partnership.

In 1910, Franklin became involved in politics by winning a state senate seat as a Democrat in a predominately Republican district.  After the 1912 elections, Franklin was appointed Assistant Secretary of the Navy.  Franklin was defeated in his campaign for the US Senate.  He was also defeated in the presidential election of 1920, where he was a vice-presidential candidate.

In August of 1921, Franklin was vacationing in Canada when he contracted polio.  He was left permanently paralyzed from the waist down.  Franklin refused to accept his diagnosis and eventually learned to stand with the help of braces.  He also learned to walk short distances by swiveling his torso and using a cane.  Franklin concealed his disability as much as possible from the public and used tricks to convince people that he was improving.  Recent research suggests that Franklin’s paralysis could have been due to an autoimmune disorder rather than polio.

In 1928, Franklin ran for governor of New York and won narrowly.  Franklin, as a firm believer of a progressive government, instituted several new social programs as the nation began to enter the Great Depression.  It was on this platform, that government must intervene to provide relief, recovery, and reform, that Franklin ran his 1932 presidential campaign.  He defeated incumbent Herbert Hoover in November of 1932.

Shortly before Franklin took office in March of 1933, he escaped an assassination attempt by Giuseppe Zangara, who expressed hatred for all rulers.  When President Franklin Roosevelt took office in March of 1933, 13 million Americans were unemployed, hundreds of banks were closed, food prices had drastically dropped, farmers were in deep trouble, and two million people were homeless.

Within the first 100 days of his presidency, President Franklin Roosevelt proposed sweeping economic reform, now known as the “New Deal.”  He heavily relied on economic advisors and created several agencies to assist in regulation.  He kept the public informed of his actions through his Fireside Chats delivered via radio.  By 1936, the economy was showing signs of improvement.  However, some accused Franklin’s programs of pushing the country towards socialism.  Some of Franklin’s programs were later ruled unconstitutional by the Supreme Court.  He also faced criticism for rising government costs.

While the economic recovery dominated the first part of his presidency, affairs worsened overseas.  Since the end of World War I years earlier, the United States had adopted a “hands off” policy in foreign affairs.  With the growing threat of Nazi Germany against Europe, and Japan against China, Franklin began to publicly support the nation’s allies.

In 1940, Franklin chose to run for an unprecedented third term as President of the United States.  He believed that his leadership and experience was needed for what was to come.  He received the nomination, campaigned on his leadership experience, and promised to try to stay out of the war.  President Franklin Roosevelt went on to defeat his opponent, Wendell Wilkie.

In his third term, Franklin’s focus shifted from domestic issues to international issues.  In 1941, Franklin agreed to extend the Lend-Lease with the Soviets.  After an American destroyer was targeted by German submarines, the US Navy took a more active role by escorting supply ships.  The Navy also adopted a “shoot on sight” policy against German ships and submarines.  Throughout 1941, Franklin spoke frequently with British Prime Minister

Winston Churchill and the nations began formulating military plans for if the United States entered the war.

On December 7, 1941, the Japanese Air Force launched a surprise attack at Pearl Harbor in Hawaii, killing 2,403 military members and civilians and destroying several battleships.  This attack thrust the United States into World War II, which dominated the remainder of his presidency.  During the war, Franklin also looked to the future and assisted in the formation of the United Nations.

In 1944, Franklin’s health was beginning to decline, although he ran for an unprecedented fourth term in office, as the United States was deeply embedded in war.  Missouri Senator Harry S. Truman was selected as his running mate.  The two defeated the Republican candidate and carried 36 of 48 states.

On April 12, 1945, Franklin died from a massive cerebral hemorrhage (a stroke).  Moments before collapsing, Franklin said, “I have a terrific pain in the back of my head.”  He died hours later.  His sudden death was a shock to the nation.  Vice-President Harry Truman succeeded him.  Less than one month after his death, the war ended and Truman stated that he wished “Franklin D. Roosevelt had lived to witness this day.”