“Especially should the Bible be placed in the hands of the young.  It is the best school book in the world.  I would that all our people were brought up under the influence of that holy book.”  The first presidential election he voted in was his own.  He delivered America’s first victorious battle in the War of 1812, and led troops into a small battle that would begin the Mexican-American War.  He kept his Army horse, Whitey, on the front lawn of the White House.  Horse hair from Whitey was a frequent souvenir to visitors.  He is Zachary Taylor, 12th President of the United States, serving from March 4, 1849, until July 9, 1850.  Zachary was born on November 24, 1784, and was a descendent from one of the signers of the Mayflower Compact.  Zachary was one of six presidents to be born in a log cabin and one of eight presidents to be born in Virginia.  Although born in Virginia, Zachary spent most of his young life on his family plantation in Kentucky, where he was taught by his mother due to the lack of formal schooling available.  He married his wife, Margaret Mackall Smith on June 18, 1810.  They had six children together, four of which survived into adulthood. 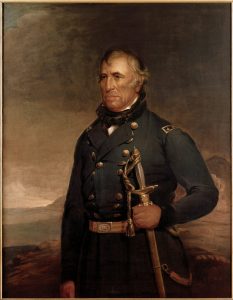 Unlike most presidents, Zachary was more interested in serving in the military than in law or politics.  After winning the first US victory for the War of 1812, he was promoted to brevet (temporary) major.  He gained the official rank of major in 1816.  Zachary spent much of his time in army traveling, although he eventually purchased a home in Louisiana for his family.  Zachary battled Indians throughout present-day Wisconsin, Minnesota, Mississippi, Oklahoma, Kansas, Louisiana, Arkansas, Florida, and Texas, eventually became a brigadier general due to his success in the Second Seminole War.  It was during his time in command of all American troops in Florida that he gained the nickname “Old Rough and Ready.”  The nickname came, in part, due to his plain and often messy look, as well as his willingness to share in the hardships of field duty with his men.  In 1844, Zachary was sent to Texas, where he helped start the Mexican-American War and lead the United States to victory.  Zachary returned home to a hero’s welcome in 1847.

Because Zachary had constantly been moving due to the military, Zachary had never had a chance to vote in an election.  His political views were also not made public.  Although Zachary grew up in a slave-owning home and owned slaves himself, he was against the expansion of slavery.  He was against secession (and civil war) and a firm nationalist.  Although he considered himself an independent, he aligned himself with the Whig party.  He agreed with the party that a President should only be able to veto a law that was against the Constitution and that the office should not interfere with Congress, however, he did not agree with protective tariffs and expensive internal improvements.

Zachary’s nomination for President in 1848 received mixed reactions, due to his mixed response to slavery.  He was a slave owner, but did not support expansion of slavery into new states because he viewed it as impractical, as cotton and sugar could not be grown in the west.  However, Zachary also supported states’ rights, even if he did not agree with succession.  Zachary was also popular due to his successful service in the military.  Upon being nominated and selected to run for president, Zachary remained unaware for several days because he refused to accept mail that was marked postage due!

As president-elect, Zachary kept his distance from Washington DC, and quietly formed his cabinet selections, much to the frustration of those who helped elect him.  Zachary despised political games.  He ensured that his cabinet was politically diverse, to reflect the diversity of the nation, although it was purposefully lacking in prominent political members, frustrating the leading members of the Whig party.

Zachary spent the first several months traveling to familiarize himself with the northern part of the nation, of which he had previously seen little.  Zachary worked to admit California, which was in the midst of the Gold Rush, as a state and allow them to determine their own laws on slavery.  Zachary also worked to settle a border dispute between New Mexico and Texas, encouraged New Mexico to apply for statehood, which became a federal territory instead, and to help alleviate concerns by Mormons in Utah.  On the issue of slavery, he refused to abolish the practice, but he did fight against expanding slavery to new states.

Zachary, and his Secretary of State John Clayton, both had relatively little international diplomatic experience, however, it was not needed.  During his presidency, there was very little international politics to attend to and no significant foreign policy decisions were made while Zachary was in office.

During his time as president, Zachary’s wife did not make public appearances, leaving her daughter to act as First Lady at social events.  Zachary attended two funerals during his time in office, that of James Polk and Dolly Madison.  While giving a speech a Dolly’s funeral, Zachary coined the term “First Lady.”

Zachary died while in office on July 9, 1850, approximately 16 months after being sworn in.  He was 65 years of age.  Zachary exact cause of death is unknown, although there was some speculation of poison, which was ruled out when his body was exhumed in 1991.  The same testing also led to the conclusion that he died from contaminated food or drink, which likely occurred at the 4th of July celebration a few days earlier, where he consumed raw cherries and milk at a fundraising event at the Washington Monument.  Several of his cabinet members also fell ill.  Following Zachary’s death, Vice President Millard Fillmore became President.