“When even one American – who has done nothing wrong – is forced by fear to shut his mind and close his mouth – then all Americans are in peril.”  He briefly owned a clothing store, along with an old army buddy, until it went bankrupt.  This did not stop him from being voted one of the ten best-dressed congressmen.  He was an accomplished piano player and once considered a career in music.  While president, he would rise early to practice.  He is Harry S. Truman, the 33rd President of the United States, serving from April 12, 1945, until January 20, 1953.  Harry was born May 8, 1884, in Lamar, Missouri, the first president to be born in Missouri.

Harry was raised in Presbyterian and Baptist churches, although he refrained from identifying too much with any one denomination.  During his time in the military, he was known to get along with all denominations, including Catholics and Jews.  Later, during his political career, he was known for being an upstanding and ethical individual. 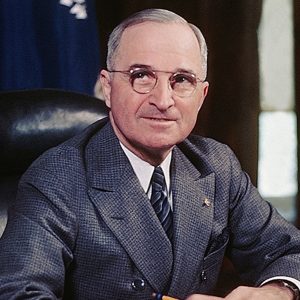 Growing up, Harry had no middle name.  The “S” was in reference to his grandfathers.  He began putting a period after the “S” when he became president and was informed that was the grammatically correct way.  After all, he wanted to be a good role model for the children!  Harry’s extremely poor eyesight led to him being unable to play sports or be eligible for West Point.  Harry did eventually join the army, passing the eye test by memorizing it!  Harry excelled in reading and music, but his parents were unable to afford to send him to college, making him the only 20th Century President to not hold a college degree.

After high school, Harry worked a variety of different jobs, including timekeeper for a railroad construction company and clerk and bookkeeper at two separate banks in Kansas City.  At the age of 33, Harry volunteered and joined the army after the outbreak of World War I.  He did not have to volunteer, as he was two years older than the age limit for the draft and exempt as the only male child.  He eventually earned the rank of captain and served in the 129th Field Artillery in France.  Harry’s leadership skills were developed during this time.

Harry returned home to Independence, Missouri following the war and married Bess Wallace on June 28, 1919.  They went on to have one child together, Mary Margaret Truman.  Harry entered politics after owning a clothing store that went bankrupt.  He was first elected as County Court judge in 1922.  He failed to win re-election.  In 1926, Harry was elected as presiding judge for the county court.  Four years later, he was re-elected.  In 1934, Harry defeated the incumbent and won a US Senate seat, where he served on the Senate Appropriations Committee.  He earned a reputation as a man of integrity following an investigation into the railroads.  Harry narrowly won his re-election, due in part to the honest reputation he had earned.  In his second term, Harry chaired a special committee that investigated the National Defense Program for war profiteering and wasteful spending.

In 1944, Harry was chosen to run on the ticket as vice-president, with Franklin Roosevelt running as President.  At the time it was recognized that Franklin would likely not live to the end of his fourth term in office.  Harry served as vice-president for 82 days, had little experience with international relations, and rarely met with the president or was informed of his decisions.  On April 12, 1945, Harry was informed that President Roosevelt had died and he was now President Harry Truman.  Harry did not appoint a new vice-president until the next election in 1948, which he narrowly won after losing the popular vote.  The Chicago Tribune was so certain that Harry would be defeated that they printed their papers, with the headline “Dewey Defeats Truman” before the final results were in.

President Harry Truman entered the office at a tumultuous time in our history.  America was fully committed and involved in World War II.  Two weeks after being sworn in, Adolf Hitler, the German leader, committed suicide, ending the war in Europe with a victory for the Allied powers.  However, the war was still raging with Japan in the Pacific.  Many experts speculated that the war would not end until America fully invaded Japan.  In an attempt to hasten the end of the war, Harry made the extremely controversial decision to drop the first atomic bombs on Hiroshima and Nagasaki.  Days later, after threats of future bombings, Japan finally surrendered.  Harry would go on to defend his actions in his memoirs and his decision remains a topic of debate in many classes.

The war was over, but international politics were still tense.  President Harry Truman faced many challenges during his nearly two terms in office.  This included the rebuilding of Europe and Japan, and the beginning of the Cold War with Russia.  Additionally, there was the Korean Conflict (war) in which the United States supported the south and China supported the north.

Another of Truman’s controversial decisions was regarding the creation of the state of Israel in the Middle East.  Many politicians were opposed, fearing that doing so would cause tensions between the United States and Arab nations, which could affect oil supplies.  Truman stated that he would make his policy based on justice, not oil.

He was also part of establishing the North Atlantic Treaty Organization (NATO), the Central Intelligence Agency (CIA), and the National Security Council.   He also established what become known the Department of Defense.  In 1948, Harry desegregated American troops.

President Harry Truman also faced several domestic issues, including returning soldiers, labor unrest, civil rights issues, housing and product shortages, and a coal workers’ strike.  Harry’s policies were at times controversial and he often fought with Congress over them.  However, the United States entered a two-decade period of growth.  Today, President Truman is considered to have been one of the top ten Presidents of the United States.

President Harry Truman left office in 1952, after choosing not to run for a third term.  He retired to Independence, Missouri, where he wrote his memoirs.  On December 26, 1972, Harry died in a Kansas City, Missouri hospital from multiple organ failure.  He was 88 years of age.