“The turning points of lives are not the great moments. The real crises are often concealed in occurrences so trivial in appearance that they pass unobserved.”  His dentures were made of wood.  He threw a silver dollar across the Potomac.  He chopped down his father’s cherry tree.  Although attributed to our first president, they are all false.  George Washington’s dentures were made from a combination of ivory, his own teeth, and teeth he had paid slaves for.  At Washington’s first inauguration, he had only one of his own teeth left.  The Potomac River was over a mile wide and as strong as Washington was, even he could not throw that far!  As for the story of the cherry tree, it originated in a book about him after his death. 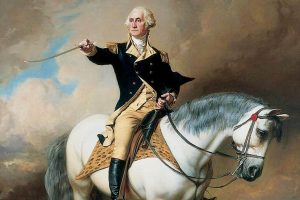 George Washington had no middle name.  He was born on February 22, 1732, in Westmoreland County, Virginia.  Little is known about George’s childhood, leading to many of the stories we remember today.  He was educated at home until the age of 15 when he began working as a surveyor.  At the age of 20, with his father and brother dead, George became the owner of Mount Vernon, one of Virginia’s most prominent estates.  Over his life, he greatly expanded the holdings.  He also inherited slaves.  His views on slavery evolved throughout his life, eventually coming to believe that they should all be freed.

Following his brother’s death, George was appointed to the rank of Major in the Virginia militia.  His natural leadership was quickly noticed.  George was involved in the start of the French and Indian War, as he was a part of the troops that attacked the French at Fort Duquesne.  Although he was captured, he was soon released and joined the British with an honorary rank of colonel.  In 1755, at the age of 23, he was made commander of all Virginia troops.  In 1758, after victoriously capturing Fort Duquesne from the French with the help of the British, George retired, frustrated with the poorly trained recruits and slow decisions.  One month later, he married his wife, Martha Dandridge Custis, who was a widow with two children.  George was thrilled with the children and treated them with extreme affection.

George opposed the Stamp Act of 1765 and was irritated at the British Proclamation Act of 1763, which prohibited settling beyond the Alleghenies.  But it was not until the Townshend Acts in 1767, that George began to take an active role in the resistance.  Initially, George opposed the colonies declaring independence, however, his views on the subject began to change as England began violating what he thought were basic rights.

In 1769, George introduced a resolution into the House of Burgesses, which would boycott all British goods until the Acts were repealed.  After the Intolerable Acts of 1774, George was selected as a delegate to the First Continental Congress in March of 1775.  George also went to the Second Continental Congress dressed in his military uniform, indicating that he was ready for war.  He was appointed Major General and Commander-in-Chief of the colonial forces.  It was not an office he sought, but he had little competition.

George experienced victories at many battles, including in Boston, Trenton, Princeton, and eventually, trapping British forces in New York, allowing them to defeat British General Charles Cornwallis at Yorktown, Virginia, with the help of the French.  Cornwallis surrendered his troops, essentially ending the war.  George retired again on December 23, 1783, and returned to a quiet life of farming, repairing lands that had been neglected and damaged during the war.

Four years after the war, the young republic was at odds with each other, as the states fought amongst themselves.  George was dismayed by the state of affairs but did not want to be called upon to serve again.  Following Shay’s rebellion in Massachusetts, George attended the Constitution Convention, at which he was elected president.  George served as President of the United States from April 30, 1789, until March 4, 1797.

He was the only president to be unanimously elected, and twice at that!  At the time, there was no popular vote, only members of the Electoral College voted.  If the Constitution is the foundation of the nation, then George built the supporting structure for the nation, including the city that bears his name.  He never lived there, nor at the White House which was completed after his death.  During his presidency, he established the Supreme Court, the Attorney General’s office, the United States Navy, the Department of Foreign Affairs (now the State Department), and the official currency for the nation.  Many of his decisions were made keeping in mind that his actions would set the precedent for any who came after him.  George also delivered the shortest inaugural address: 135 words.

George wanted to avoid similarities to the royal court, so he preferred the title of Mr. President instead of something more formal and imposing.  George originally did not want to accept a salary for the position but did so to avoid leaving the impression that only a wealthy man could serve.  While president, George personally led local militias to put down the Whiskey Rebellion in Pennsylvania!  Throughout his presidency, George was known to act in honesty and with integrity.  He was able to balance exercising power with restraint in a manner that few presidents have been able to imitate.

George remained distant in foreign affairs, realizing that the young nation could not afford to enter into any European conflicts.  George also opposed the development of political parties, believing that political parties restrain free and honest debate, as members are bound to the ideologies of their party.  George chose not to serve a third term, despite pressure, for several reasons: he desired to set a precedent for a peaceful transfer of power, he desired to return to Mount Vernon, and he was beginning to feel the limitations that come with age.  His final official act was to pardon all the members of the Whiskey Rebellion.  George wanted to leave the nation with a message of hope, composing a farewell address.  He returned to Mount Vernon in the spring of 1797.

Washington remained a private individual throughout his life, in particular about his religious beliefs.  It is well known Washington was a member of the Anglican Church.  In his personal spiritual life, Washington regularly had private prayer sessions and considered personal prayer a large part of his life.   His nephew once noted that he witnessed Washington kneeling with an open Bible doing personal devotions, both in the morning and evening.  His relationship with God was between them.

On a cold day in December of 1799, George spent the day outside riding and tending to farm business in snow, hail, and freezing rain, before returning home, eating in his wet clothes, and retiring to bed.  The following day, George awakened with a sore throat, although he insisted upon riding out again.  The next day, George awoke early, hardly able to speak or swallow.  His personal physicians were summoned.  The three doctors disagreed about how he should be treated.  George Washington, First President of the United States of America died around 10 pm on Saturday, December 14, 1799, at the age of 67.  His final words were “Tis well.”  To this day, scholars disagree over George’s exact cause of death.  The world mourned his death.  First Consul Napoleon Bonaparte of France ordered 10 days of mourning and the British fleet paid tribute to his memory.  In America, many cities held mock funerals and presented eulogies.  George, and later his wife, were eventually entombed in Mount Vernon, with the inner vault’s door closed and the key thrown in the Potomac.