“Liberty has never come from the government.  Liberty has always come from the subjects of the government.  The history of liberty is a history of resistance.  The history of Liberty is a history of the limitation of governmental power, not the increase of it.”   He never learned to read or write until the age of 10, but he is the only president to have earned a Ph.D.  His face appears on the $100,000 bill – yes, $100,000 bill! – which is the largest denomination of US currency and only for use among Federal Reserve Banks.  He was one of the last presidents to write his own speeches and the second president to receive a Nobel Peace Prize.  He is 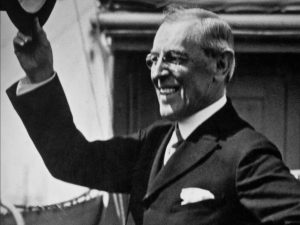 Thomas Woodrow Wilson, 28th President of the United States, serving from March 4, 1913, until March 4, 1921.  Tommy, as he insisted upon being called until the age of 25, was born on December 28, 1858, in Staunton, Virginia.  He had Irish ancestry, as both of his paternal grandparents were from Ireland.

Woodrow’s father was a theologian who helped found the Presbyterian Church of the Confederacy.  Throughout his entire life, Woodrow was known to be a religious man and had stated that his faith was his guiding force in life.  It is believed that Woodrow may have had dyslexia, which hindered his education when he was young.  He went on to graduate from the University of New Jersey, now known as Princeton.  Woodrow married his wife, Ellen Axson, in June of 1885.

Woodrow spent his early adulthood teaching at several universities, including Princeton, where he was voted the most popular professor for six consecutive years.  In 1902, Woodrow became president of Princeton.  He added three female professors and Booker T. Washington, an African-American.

In 1911, Woodrow was elected governor of New Jersey, where he rose to prominence and became a figure in the national media.  The following year, he was, after 46 ballots, nominated to run as the Democratic presidential candidate.  With 42 percent of the popular vote, Woodrow defeated Republican incumbent William Taft and third party candidate Teddy Roosevelt.  It was the only election in which a third-party candidate received more votes than a nominee from a major party.

President Woodrow Wilson showed he was a much more private president than most.  Instead of an inaugural ball, Woodrow celebrated with family and friends at the White House.  Instead of conferring with those who sought appointments in his administration, Woodrow privately considered the candidates and made his decisions.  Woodrow met with the press twice a week, however, they were not allowed to directly quote him.  President Woodrow Wilson also resumed the practice of personally delivering the State of the Union address, which had not been done since 1801, when Thomas Jefferson discontinued the practice.

On July 26, 1914, World War I broke out in Europe.  President Woodrow Wilson worked hard to keep the United States out of the war, declaring the nation neutral.  During the same time his wife took ill, eventually dying on August 6, 1914.  During the following six months, Woodrow battled depression.  Throughout 1914 and 1915, several Americans lost their lives when their cruise ships were sunk by German submarines.  Woodrow appealed to the German government for an agreement not to shoot and sink unarmed merchant ships.  The German government eventually agreed.  This allowed President Woodrow Wilson to keep America out of the war, although Germany did not always follow this agreement.

In early 1915, Woodrow met Edith Galt, whom he married in December of the same year.  This buoyed his spirits and his aspirations for re-election.  By 1916, despite his conviction to remain neutral, Woodrow received final approval to increase the military and construct additional Navy vessels.  In the 1916 election, Woodrow ran on the slogan “He kept us out of the war,” although Woodrow never promised during his campaign to continue to keep the United States out of the war.

At the end of his first term, Woodrow began advocating for a postwar League of Nations.  Germany rescinded their earlier promises, and began reaching out to Mexico.   By March 20, 1917, Woodrow could avoid it no longer and the United States entered World War I.

Woodrow spent six months abroad in Paris for a Peace Conference.  At the time, it was the longest a President spent outside the United States.  It was also the first time a United States President traveled to Europe while in office and Woodrow was the first president to visit the Pope.  During the conference, Woodrow advocated for the acceptance of the League.  Woodrow became ill during the conference and although he recovered, he was left in a weakened state.

In 1919, Woodrow had a series of debilitating strokes, becoming an invalid at the White House, while his wife worked at hiding the full extent of his condition and ran what became known as the “Petticoat Government.”  Woodrow’s illness prevented him from effectively battling the Republicans who opposed the League of Nations.

In addition to the problems in Europe and Russia, which dominated his presidency, Woodrow also frequently intervened in issues in Latin America and South America.

The end of the war brought about several domestic problems.  Soldiers were brought home with little planning and few benefits.  Race riots began in dozens of cities.  There were worker strikes in the steel, coal, and meatpacking industries.  A wartime bubble on farmland burst, which left many farmers in debt.  All these problems contributed to Woodrow not being nominated for a third term, although he had hoped for one.  Additionally, Woodrow’s declining health contributed to his defeat.

Woodrow Wilson died from a stroke and other heart-related problems in his home in Washington DC, on February 3, 1924.  He was 67 years of age.  Woodrow became the only president to be buried at the National Cathedral.