“Abuse of words has been the great instrument of sophistry and chicanery, of party, faction, and division of society.”  His ancestors were among those who landed at Plymouth Rock in 1620.  He began smoking when he was eight years old and preferred hunting and fishing to attending school, although he did love to read.  His mother gave birth to him before the United States became an independent nation and, out of the first five presidents, he was the only one not born in Virginia.  He is John Adams, Jr., 2nd President of the United States, serving from March 4, 1797, until March 4, 1801. 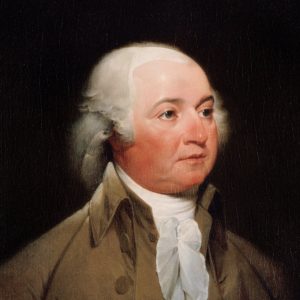 John was born October 30, 1735, in Braintree, Massachusetts, which has since been renamed Quincy.  As the eldest child, it was important to his parents that John receive a formal and quality education. As a result, John, at the age of 16, began attending Harvard College.  John eventually chose to become a lawyer, against his father’s wishes, which were for John to become a minister.  John was descended from Puritans. However, John eventually became a Unitarian, dropping most of the Calvinist beliefs of his Puritan ancestors.  He married his wife, Abigail, on October 25, 1764, and had five children with her, including future president John Quincy Adams.

John obtained his law license in 1758 by reading the law and studying under another lawyer.  He then began publishing essays, under a pseudonym in Boston newspapers.  This was his first foray into politics.  In 1765, John wrote a piece in opposition to the Stamp Act, which was well received in the colonies.  In 1770, John used his law degree to defend eight British soldiers charged with murdering five civilians.  We now refer to this incident as the Boston Massacre.  During the trial, John made his legendary comment, “Facts are stubborn things; and whatever may be our wishes, our inclinations, or the dictates of our passion, they cannot alter the state of facts or evidence.”  Only two of the eight were convicted of any crime.  Three months later, John filled a vacancy in the Massachusetts legislature.

John played an instrumental part in helping the United States gain its freedom from Great Britain.  Using his knowledge of the law, John provided extensive arguments against many of Britain’s policies on the colonies.  He supported the efforts of the Boston Tea Party and attended the First and Second Continental Congress.  During the Continental Congresses, John helped draft the Declaration of Independence.  He supported the nomination of George Washington to commander-in-chief of the army.  If the United States had lost the Revolutionary War, John would likely have been hanged as a traitor for his activities.  John represented the fledgling nation in France and other European nations.  He eventually became the first American ambassador to Great Britain and worked to restore the relationship between the two nations.

In 1779, after returning to America, John helped write the Massachusetts Constitution, along with his cousin Samuel Adams and James Bowdoin.  It was the first constitution written by a special committee and the first ratified by the people.  It was also the first to feature a bicameral legislature, with distinct and restraining powers.  John also included in the constitution a Declaration of Rights, which led to the abolishment of slavery in Massachusetts in 1780.  John did oppose slavery, although he was not extremely vocal about his views, partially to keep from offending Southerners.  He had never owned a slave.

In 1789, George Washington unanimously won the first presidential election. John was named vice president, with the second most electoral votes.  At the time, each member of the electoral college cast two votes.  The person with the most votes became president, while the person with the second most votes become vice president.  All 69 members of the electoral college voted for Washington.  John received 34 votes.  The next closest candidate, John Jay, received just 9 votes.

John was re-elected vice president in 1792.  As vice-president, John did not have a defined role, other than the president of the Senate, and was rarely sought out by President Washington for advice.   As president of the Senate, John cast a record of 31 tie-breaking votes, which often protected the powers of the Presidency.  John was frustrated with his limited role, complaining to his wife, “My country has in its wisdom contrived for me the most insignificant office that ever the invention of man contrived or his imagination conceived.”

In the election of 1796, John Adams ran against and narrowly defeated Thomas Jefferson for the presidency, making Thomas his vice-president.  From 1797 to May of 1800, President John Adams and his family resided in the President’s House in Philadelphia, Pennsylvania.  They then moved into the Presidential Mansion (White House) in Washington, DC.  Some claim that the paint was still wet while he was moving in!  John continued the plans of the Washington Administration, expanding the army and the navy.  He also continued Washington’s policy of staying out of European conflicts.

France’s help during the Revolutionary War led to many Americans supporting France in their war with Britain.  France, however, began seizing American ships, believing America to be equal partners with Britain.  Additionally, the French refused to discuss anything with America unless they were first paid huge bribes.  This upset many Americans, leading them to call for war with France.  John knew that the new nation could not afford another war so soon.  Despite losing popularity, John managed to avoid war with France.  In 1799, John was able to establish friendly relations with France, sending a diplomat to Napoleon on a peace mission.

President John Adams signed into law several unpopular acts, including the Direct Tax of 1798 which caused rebellions to break out in Pennsylvania.  The Alien Friends Act and the Alien Enemies Act gave the president authority to deport any foreigner deemed a danger to the country.  John also increased the period of residence required for American citizenship from seven years to 14 years.  The Sedition Act made it a crime to publish “false, scandalous, and malicious writing” against the government and its officials.  Under the Sedition Act, a Congressman and several newspaper editors were prosecuted, which began shortly before the 1800 election.  Opponents of John argued that these acts were for political targeting.  Nearly all of these unpopular acts expired by 1800.

n 1800, John, as a Federalist, once again faced off for the presidency with Thomas Jefferson, a Republican.  John’s unpopular actions as President allowed Thomas to become the narrow victor by a vote of 65 to 73.  However, John actually came in third in the election.  Aaron Burr, also a Republican, received the same number of votes as Thomas, leaving the decision of who was to become president to the House of Representatives.

John did not attend the inauguration of his successor, making him one of four surviving presidents not to do so.  Although John and Thomas famously did not get along, his absence was mostly due to his recently deceased son.  John was anxious to return to his wife’s side, as she had remained in Massachusetts.

John retired from public life and worked on an autobiography he never finished, despite having time to do so.  He later defended his conduct and character, which was attacked by Alexander Hamilton in 1800.  In 1812, John and Thomas put aside their differences and resumed their friendship, maintaining it through letters.  In 1825, 16-months before his death, John’s son, John Quincy Adams, became the 6th President of the United States.  Only one other father and son have both become president (George H.W.  Bush and George W. Bush).

On July 4, 1826, the 50th anniversary of the adoption of the Declaration of Independence, at approximately 6:20 pm, John Adams died at his Quincy, Massachusetts home.  He was 90 years of age.  Relatives at his bedside report that his last words were “Jefferson survives.”  Unbeknownst to John or his family with him, Thomas Jefferson had died earlier that day.  John and Thomas are the only two presidents to have died on the same day.  John was one of only four presidents who enjoyed a retirement longer than 25 years.