“But a Constitution of Government once changed from Freedom, can never be restored. Liberty, once lost, is lost forever.”  He was the first President with a middle name.  He was the first son of a former president to become president.  Additionally, he was also the first president elected who did not receive the majority of the popular or electoral votes.  He is John Quincy Adams, 6th President of the United States of America, serving from March 4, 1825, until March 4, 1829.  John was born on July 11, 1767, in Braintree, Massachusetts, since renamed Quincy, while the United States was still considered colonies of England. 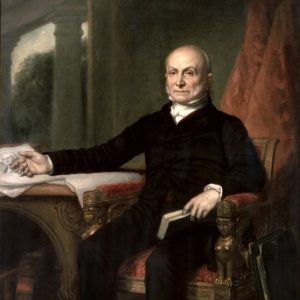 At the age of 10, his family moved to Europe for a political position, allowing John to study in Paris and Amsterdam.  By the age of 14, he served as secretary to the Minister of Russia.  He returned to America at the age of 17 and studied law at Harvard University.  He was admitted into the bar in 1791.  John became the first president that had previously been a lawyer.  In 1797, John married Louisa Catherine Johnson, who was British, making her the first of two foreign-born First Ladies.

John was involved with politics from an early age, beginning by accompanying his father on various international, diplomatic assignments.  He then earned national recognition for his series of articles supporting the first president George Washington’s decision to stay out of European conflicts.  Soon after, at the age of 26, John was appointed by President Washington to be minister to the Netherlands.  At the time John did not want the assignment, however, he accepted and went on to meet his wife.  He worked overseas for many years before returning to the United States.

Upon his return to the United States, John attempted to be an attorney, but quickly resumed a role in politics.  He secured a seat in the Massachusetts State Senate, before being appointed to the United States Senate.  While serving in Congress, John voted in support of the Louisiana Purchase and President Jefferson’s Embargo Act, which angered his fellow Federalists.  In June of 1808, John resigned from the Senate and became a Democratic-Republican.

In 1809, John was appointed as the first officially recognized United States Minister to Russia under President Madison.  He returned in 1814, to help negotiate the Treaty of Ghent, which ended the War of 1812.  He then went on to serve as minister to England, a position his father had held 30 years earlier.  In 1817, John returned to the United States and served as Secretary of State under President James Monroe.  During this time, John helped acquire Florida, negotiate various Treaties, and helped write the Monroe Doctrine.  Some histories believe this time in John’s life was the highlight of his career.

The presidential election of 1824 was a controversial one, earning the nickname the “Corrupt Bargain.”  The party system had fallen apart and while Andrew Jackson won the majority of the popular and electoral votes, he failed to achieve the necessary majority of electoral votes.  Thus, it was up to the House of Representatives to decide the president.  Some believe that Henry Clay, the Speaker of the House, struck a deal with John Quincy Adams: Henry would have John elected president if John would appoint Henry Secretary of State, which John did.  John’s victory came as a great surprise to Andrew Jackson and his supporters.

John refused to use a Bible during his inauguration, insisting that he did not want to involve the Bible in politics.  This is not to say that John did not believe in Jesus Christ.  He often attended three church services on Sundays and stated that he was Christian.  As president, he founded All Souls Church, which later became a Unitarian church.

Although John was a well-known and successful diplomat, he was not considered a successful President.  He failed to develop the necessary political relationships with members of Congress, leading to many of his proposals being rejected.  His proposals included several far-sighted programs intended to modernize America such as developing roads, canals, a national university, and an astronomical observatory, among other initiatives.  President John Quincy Adams also supported high tariffs to fund the

numerous projects.  His Tariff of 1828, was extremely unpopular in areas of the South, which had especially high support for John’s rival, Andrew Jackson.  President John Quincy Adams also held a generous policy toward Native Americans, much to the dismay of western settlers.

While president, John did not give much thought to foreign affairs or long-term consequences.  Despite these shortcomings, John managed to arrange several treaties with various nations, including Denmark, Mexico, the Hanseatic League, Prussia, and Austria.  President John Quincy Adams granted the first interview to a female reporter…after she stole his clothes while he was swimming nude!  She refused to return them until she was granted the interview she had previously been denied!

John became a one-term president after losing the 1828 election to Andrew Jackson, who had been his primary opponent four years earlier and remained his opponent throughout his presidency.

After leaving the White House, John was elected to the House of Representatives in 1830.  He became the first president to serve in Congress after his presidency.  He remained in Congress for 14 years, opposing slavery, warning of the possibility of a coming Civil War, and having far more success than he ever had as president.  On February 21, 1848, John had a heart attack at his desk in the House chamber.  He died two days later, on February 23, 1848, in the Speaker’s office.  He is the only president to die in a Capitol building.  Future president Abraham Lincoln served as one of his pallbearers.