“The Office of Vice-President is a greater honor than I ever dreamed of attaining.” He had an excessive wardrobe and changed several times a day. He oversaw the inauguration of the Brooklyn Bridge. During the Civil War, he and his wife held opposing viewpoints.  He was ill during his entire term as president and knew he could die before finishing his term. He is Chester Alan Arthur, 21st President of the United States, serving from September 19, 1881, until March 4, 1885. Chester was born on October 5, 1829, in North Fairfield, Vermont, one of two presidents to have been born in Vermont, although it was rumored, but never proven, that Chester was actually born in Bedford, Quebec, Canada. 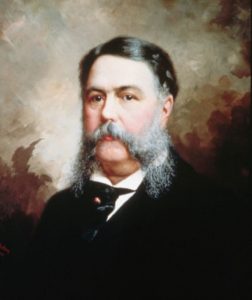 Chester’s family moved frequently, both before and after he was born, giving rise to political opponents’ accusations regarding his birth. Chester’s family eventually settled in Schenectady, New York. His father was a Baptist minister, although Charles become a member of the Episcopal Church.

Chester became politically involved at a young age, getting into a schoolyard brawl with students who support James Polk instead of Henry Clay for president. However, Chester was considered a good student, eventually graduating from Union College in Schenectady in 1848. Chester then began teaching before being admitted to the bar, after which, he began practicing law in New York City. In 1859, Chester married Ellen Herndon, whom he affectionally called Nell.

In 1860, Chester was appointed to the military staff of Governor Edwin Morgan. Upon the outbreak of the Civil War in April of 1861, Chester received the rank of brigadier general, was assigned to the quartermaster department, and was responsible for housing and outfitting troops in New York City. Chester was successful and efficient in his position, earning a quick promotion to inspector general and then quartermaster general. Chester turned down several front-line appointments, at the request of Governor Morgan. Despite Chester’s effectiveness at his position, it was a political appointment and he was relieved when a member of the opposition party became governor in January of 1863.

Due to his service, Chester would not have been drafted, however, following the example of President Lincoln, Chester hired a substitute. Chester returned to his law practice, where he became quite successful. Chester remained in contact with former Governor Morgan, who had been elected to the United States Senate. Due to that relationship, Chester remained active in Republican politics, although he never ran for an elected office. Chester helped to raise funds for the election of General Ulysses S. Grant, although Grant lost the state of New York in the election. This prompted Chester to devote more and more time to party business and less time to his law practice.

In 1869, Chester was appointed New York City tax commission, where he remained for one year. In 1871, Chester was recommended by President Grant for Collector of the New York Custom House. Along with the job came a small salary, with significant monetary benefits, allowing Chester and his wife to live a lavish lifestyle. Following the election of Rutherford Hayes, President Hayes worked to decrease political appointments. Chester, among others, worked against President Hayes and was eventually fired from his current position. Shortly thereafter, on January 12, 1880, Chester’s wife, who had frequently complained of his long absences due to political work, suddenly died. Chester never remarried.

In 1880, James Garfield was selected to run for president for the Republican party. Chester Arthur was chosen to be his vice-president, hoping that Chester would help carry the state of New York. With a record turnout, Garfield won the presidency, with Chester as his vice-president. President Garfield and Chester were not particularly close, as President Garfield refused Chester’s requests for some of his friends to be granted political appointments. Chester had little to do in Washington, except preside over the Senate, where he cast several tie-breaking votes.

On July 2, 1881, President Garfield was shot by Charles J. Guiteau, a mentally unstable man who believed that when Chester was president, he would be granted a political appointment. Research revealed that Charles and Chester did not know one another. President Garfield did not die until September 19, 1881. During the time between the shooting and President Garfield’s death, Chester was reluctant to act as President, leaving a void of authority in the executive office. Chester’s reluctance was also due to the lack of legal guidance regarding presidential succession.

After Garfield’s death, Chester quickly returned to Washington DC, where he was sworn in as President of the United States on September 22. He immediately came into conflict with the majority of the Presidential Cabinet, as all had been appointed by the late President Garfield. Despite the differences, Chester kept the entire cabinet until December, although a few chose to resign early. In part due to President Garfield’s assassination, both parties began to turn against the spoils system and work towards reform, including President Arthur. On January 16, 1883, Chester signed the Pendleton Civil Service Reform Act into law. To the surprise of many, Chester enforced the Act and eliminated a significant amount of unnecessary federal jobs. As president Chester also signed the Edmunds Act, with made polygamy a federal crime.

Due to high taxes during the Civil War, the government had reached a surplus of $145 million. President Chester Arthur agreed to lower excise taxes on everything except liquor. His opponents in Congress attempted to reduce to surplus by increasing spending on internal improvements. Arthur did support, which Congress did not, funds going to improve the condition of the nation’s navy, which had significantly declined since the Civil War.

Chester also supported civil rights for slaves freed following the Civil War, however little federal action could be taken. The Supreme Court of the United States had struck down the Civil Rights Act of 1875, and President Chester Arthur was unable to persuade Congress to pass new legislation replacing it. Chester’s attempts at uniting with a Southern party whose members also supported civil rights failed as the party declined. Chester also supported the education of Native Americans, along with granting them their own land.

In August of 1882, President Chester Arthur signed the Immigration Act of 1882, which levied a 50-cent tax on immigrants and excluded mentally ill, intellectually disabled, criminals, and other individuals that would potentially be dependent upon public assistance. Chester also signed the Chinese Exclusion Act in May of 1882, which banned Chinese immigrants for 10 years.

Chester was diagnosed with Bright’s disease, a kidney ailment commonly referred to as nephritis today, shortly after becoming president. Although he attempted to keep his illness from the public, rumors began to spread by 1883. Chester was also losing weight and looked aged and tired. Despite his illness, which he knew would only grow worse the harder he worked, Chester campaigned for a second term, albeit, half-heartedly. He lost the nomination to James Blaine.

Chester left the presidential office and returned to his home in New York City. He declined a request to run for the United States Senate, instead returning to his law practice. Chester was limited in his abilities due to the increasing pain from his kidney disease. On November 16, 1886, Chester ordered all of his papers, personal and official, to be burned. Chester died the following day on November 17, 1886, at his home. He was 57 years of age.