“The American Dream means giving it your all, trying your hardest, accomplishing something. And then I’d add to that, giving something back. No definition of a successful life can do anything but include serving others.” He hates broccoli and refused to eat it anymore once he became President.  He was the youngest pilot in the Navy following his enlistment after the bombing of Pearl Harbor.  While in the Navy, he was shot down while on active duty and earned three Air Medals and the Distinguished Flying Cross.  After the conclusion of World War II, he went to Yale University where he became captain of the school’s baseball team, which allowed him to meet Babe Ruth several months before Ruth’s death. 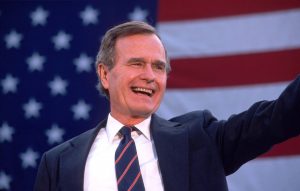 He is George H.W. Bush, 41st President of the United States of America, who served from January 20, 1989, to January 20, 1993.  George Herbert Walker Bush was born June 12, 1924, in Milton, Massachusetts.  He was one of four presidents born in Massachusetts.  His father was a prominent business man and also served as US Senator from Connecticut, where his family moved shortly after his birth.  George graduated from a private school prior to joining the Navy at the age of 18.  On January 6, 1945, George married Barbara Pierce.  They went on to have six children together, five of whom lived into adulthood.

After graduating from Yale University, George entered the oil business, where he remained for 15 years. George became interested in politics, beginning his political career by winning a seat in the House of Representatives in 1966.  By 1977, George had gained a wealth of experience.  He served as ambassador to the United Nations, chairman of the Republican National Committee, US envoy to China, and director of the CIA (Central Intelligence Agency).  During the Jimmy Carter administration, George took a break from politics to teach Administrative Science at Rice University’s Jones School of Business.  He also worked with the Council on Foreign Relations.  By 1980, he was back into politics, running against Ronald Reagan for the Republican Presidential Nomination!  After a few early victories, George’s momentum slowed and he eventually withdrew from the race.  After Ronald Reagan was selected, he chose George as his vice-presidential running mate.

Throughout his time as vice-president, George was able to develop several personal friendships with current and future heads of states, which not only helped President Reagan, but was also beneficial when he became President.  George and Ronald’s relationship grew following an attempted assassination on Ronald.  Upon learning of the event, George immediately returned to Washington D.C., where he was encouraged to proceed from the airport to the White House by helicopter.  George refused stating, “Only the President lands on the South Lawn.”  Within two weeks, Ronald was recovered and returned to work.  George’s response during the crisis impressed Ronald and the two men began sharing lunch in the Oval Office every Thursday.

In 1989, George H.W. Bush became one of the few sitting Vice-Presidents to be elected President.  He belonged to a rare club consisting of John Adams (1796), Thomas Jefferson (1800), and Martin Van Buren (1836).  Of course, George already had some presidential experience – he acted as President for eight hours while President Reagan underwent surgery!

When President George H.W. Bush took office, he faced a growing federal deficit.  George believed that the best way to reduce the deficit was to cut government spending.  However, the democratically controlled Congress believed differently and wanted to raise taxes.  George eventually caved to their demands, alienating him from the Republican Party and the American public for breaking his “No new taxes” campaign oath.  Unemployment rates also rose during his time in office and many individuals who had considered their job secure, were laid off.

George signed into law many successful and welcomed bills, including the Americans with Disabilities Act of 1990, the Civil Rights Act of 1991, the Clean Air Act, and the Immigration Act of 1990.  President George H.W. Bush supported the expansion of the space program, including the building of a space station and the exploration of the moon and Mars.  He also encouraged community volunteering.

Internationally, President George H.W. Bush faced several problems.  The struggle against Panamanian leader Manuel Noriega began during Ronald Reagan’s administration, but it was George who was finally able to remove Noriega from power after he refused to hand over the presidency to the democratically elected Guillermo Endara.

George sent several thousand troops to support Endara, which eventually resulted in Noriega surrendering to the United States.  George moved to end the Cold War with the USSR by meeting with Mikhail Gorbachev, against his advisor’s advice.  They signed a treaty in 1991, and, a US-Russia strategic partnership. after the dissolution of the USSR.

President George H.W. Bush also faced problems in the Middle East.  Oil-rich Kuwait was invaded by northern neighbor Iraq, ruled by Saddam Hussein, in 1990.  George opposed the invasion and began garnering support for Kuwait from Europe, Asia, and Middle Eastern allies.  An attack against Iraq was successfully mounted and carried out.  Iraq was forced out of Kuwait, leading to a skyrocketing approval rates, but it was not enough to overcome his earlier mistakes.  In 1991, George lost his re-election bid to Arkansas Governor William Jefferson “Bill” Clinton.

George is the third president to have received an honorary knighthood by Queen Elizabeth II (the other two being Dwight D. Eisenhower and Ronald Reagan).  In 2009, George had an aircraft carrier was named after him.  George remained a rather active retired President, visiting other nations, including Kuwait, where there was a failed plot by the Iraqi Intelligence Service on his life.  George celebrated his 75th, 80th, 85th, and 90th birthdays by skydiving.  In his later years, he slowed down; as he has a form of Parkinson’s which limited his mobility.  George, however, continued to show his personality through his brightly colored and patterned socks!

George is only the second president to have fathered a president (George W. Bush), the other being John Adams (John Quincy Adams).  George and his wife Barbara hold the record for being the longest married Presidential couple at 72 years! Sadly, on Tuesday, April 17, 2018, Barbara passed away at the family home in Houston, Texas, at the age of 92. George followed his wife a few months later, on November 30, 2018, at the age of 94.  A few months after his death, former President Jimmy Carter surpassed George as being the oldest living president.

Throughout his political career, George has frequently spoke of his belief in God, and how such faith relates to American values.  In his acceptance speech at the Republican National Convention in 1988, George stated, “I am guided by certain traditions. One is that there is a God and He is good, and His love, while free, has a self imposed cost: We must be good to one another.”