“If you live long enough, you’ll make mistakes. But if you learn from them, you’ll be a better person. It’s how you handle adversity, not how it affects you. The main thing is never quit, never quit, never quit.”  He excelled at playing the saxophone in high school.  He is the only president who was a Rhodes Scholar.  President John F. Kennedy inspired him when he shook President Kennedy’s hand at the age of 16, four months before Kennedy’s death.  He is William “Bill” Jefferson Clinton, 42nd President of the United States, serving from January 20, 1993, until January 20, 2001. 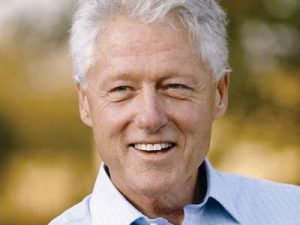 He was born William Jefferson Blythe III, on August 19, 1946, in Hope, Arkansas.  Bill’s father died shortly after his birth, and his mother left him with his grandparents while she completed nursing school.  During his time with his grandparents, a discipline for education was established, which would last for a lifetime.

In 1950, Bill’s mother completed her nursing degree, and the two moved back to Arkansas.  In Arkansas, Bill’s mother remarried and both Bill and his mother adopted the new surname of Clinton.  During his childhood, Bill was drawn to the Baptist Church by their gospel music.  Neither his parents nor grandparents were religious. Bill would wake early, dress in his best clothes, and walk half a mile to the local Baptist Church.  It was their music that inspired him to learn to play the saxophone.

Unfortunately, Bill’s stepfather would often drink and become abusive toward him, his mother, and his younger half-brother.  At the age of 14, Bill stepped between his step-father and his mother, finally stopping the abuse, but not the drinking.  Bill’s mother obtained a divorce in 1962.

Bill graduated from Georgetown University in 1968, and won a Rhodes Scholarship for a two-year study at Oxford University.  After arriving Bill received his draft notice, forcing a return to Arkansas.  Bill avoided the draft by enrolling in the ROTC program at the University of Arkansas Law School. He never attended and instead returned to Oxford.  Bill did resubmit his name to the draft board, however, he was never drafted again.  Bill eventually attended and graduated from Yale Law School.  During his time at Yale, Bill met and married his wife, Hillary Rodham.  Bill quickly entered politics after his graduation.

In 1974, Bill entered his first political election, challenging the incumbent for a seat in the US House of Representatives.  Although Bill lost the election, he firmly established himself as a rising star.  In 1976, Bill was elected as Arkansas’ Attorney General before being elected, at the age of 32, as Governor of Arkansas in 1978.  Bill became one of the youngest individuals to be elected governor in America’s history.  Two years, and several mistakes later, Bill failed to be re-elected.  In 1982, Bill once again sought and won the governorship, holding the position for four consecutive terms.

Bill worked to increase his national visibility, especially beginning in the late 1980s.  In 1990, he became actively involved in the Democratic Leadership Council, and in 1992, Bill easily won the Democratic nomination for President.  He chose Tennessee Senator Al Gore as his vice president.  Amidst claims of draft dodging and marital infidelity, Clinton and Gore went on to defeat incumbent President George HW Bush, who had broken his promise of “No new taxes.”

President Bill Clinton ratified the North American Free Trade Agreement.  In 1993, he signed into law the Family and Medical Leave Act and the “Don’t Ask Don’t Tell” policy, both major accomplishments at the time.  He also endorsed a health care reform act, designed to provide universal health coverage, but it was defeated in Congress.  In 1994, his administration launched the official White House website!  It was seen as a way to increase communication.

To restore his waning popularity, President Bill Clinton increased the minimum wage in 1996 and increased the number of policemen.  He also increased punishments for a variety of crimes.  In 1996, Bill won re-election.

Internationally, Bill faced the Battle of Mogadishu in Somalia, which resulted in an attack on US Soldiers, with several being trapped behind enemy lines.  Eighteen American soldiers were killed, with 73 wounded.  This battle caused US troops to withdraw from Somalia, although the United States later participated in attacks in defense of United Nations safe zones.  President Bill Clinton helped increase relations between Israel and the Palestine Liberation Organization, leading to the signing of the Oslo Accords in 1993, although the result was short-lived.

Although the nation experienced its lowest unemployment rates in recent history, low inflation rates, and improved economic quality, Bill’s second term was overshadowed by a personal scandal.  He was accused of having sexual relations with 22-year-old intern Monica Lewinsky.  Bill vehemently denied the charges at first – “I did not have sexual relations with that woman” – before eventually confessing.  Bill was impeached by the House of Representatives for perjury and obstruction of justice.  He was later acquitted by the Senate.  Bill was only the second president to be impeached; Andrew Johnson was the first.  Despite the scandal, Bill left office with one of the highest approval ratings.  He has remained popular in polls since leaving office.

Since leaving office, Bill is the only President to have had his wife, Hillary Rodham Clinton also run for the office.  Bill has participated in many speaking engagements, most notably, supporting the election of Barack Obama.  Bill has also supported his wife in her political endeavors.  The world is an ever-changing place and it will be years before history can truly judge Bill’s actions as President, for better or worse.