“Change based on principle is progress.  Constant change without principle become chaos.” He was a football player in college, but after a knee injury, he became a cheerleader and coached the junior varsity team, who won most of their games.  He was the first nominee to campaign using an airplane, the first to be president over 50 states, and the first president to be a licensed pilot.  Additionally, he was the only president to serve in both world wars.  He is Dwight David “Ike” Eisenhower, 34th President of the United States of America, serving from January 20, 1953, until January 20, 1961.  Dwight was born on October 14, 1890, in Denison, Texas, the third of seven children.  His family moved to Abilene, Kansas when he was very young.

Growing up, Dwight’s family was very religious, likely Mennonites, or possibly Jehovah’s Witnesses.  He eventually left the denomination in which he was raised due to disagreements over their interpretation of the Bible.  As president, he was baptized into the Presbyterian Church and frequently held “prayer breakfasts.”  He also sought to reinvigorate America’s religious values. 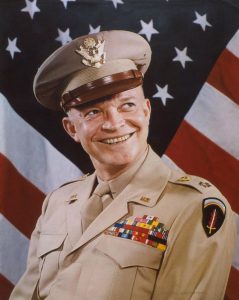 Dwight graduated high school in 1909, and began working with his father and uncle at a creamery, and also as a firefighter, to help support his brother in college.  The brothers had agreed to switch places after two years, however in 1911, Dwight was accepted in the United States Military Academy at West Point in New York.  Dwight graduated as a commissioned 2nd Lieutenant with the class of 1915, which became known as the “the class the stars fell on.” Fifty-nine members of the class eventually received the minimum rank of brigadier general.

Dwight was promoted to 1st Lieutenant on July 1, 1916, the same day as his wedding to Mamie Geneva Doud, whom he had met while stationed in Texas.  Dwight and is wife moved frequently throughout the first years of their marriage.  In 1917, with the start of World War I, Dwight hoped to be assigned overseas. However, he was instead assigned to run a tank training center in Camp Colt in Gettysburg, Pennsylvania.  Dwight continued to rise through the military ranks, being appointed major in 1920.  In 1924, Dwight attended Command and General Staff School in Ft. Leavenworth, Kansas, where he graduated two years later with a reputation for military prowess.

Dwight toured and reported for the War Department under General John Pershing from 1927-1929.  He was then appointed as chief military aide under General Douglas MacArthur.  In 1935, Dwight was assistant military advisor to the Philippines, returning to the United States in 1940.  Within a year, he was promoted to brigadier general and a year later to major general.  Months later, Dwight became commander-in-chief of the Allied Forces and led Operation Torch, the Allied invasion of North Africa.

On June 6, 1944, D-Day, General Eisenhower commanded, as the Supreme Allied Commander of the Allied Expeditionary Force, the Normandy invasion.  In December, Dwight was promoted to a five-star general.  Following Germany’s surrender, he became military governor of the US Occupied Zone.  Upon his return home, he was greeted with a hero’s welcome and appointed US Army chief of staff.  For two years he served as president of Columbia University, although he was often traveling.  In 1950, he was appointed Supreme Commander of the North Atlantic Treaty Organization.  Dwight went on to retire from active service in the Army in May 31, 1952.

In 1951, President Harry Truman approached Dwight about running for president under the Democratic Party.  Dwight expressed his disagreement with the Democratic party, and became the Republican nominee for president, with the infamous slogan “I Like Ike.”  Dwight won agist Adlai Stevenson in a landslide election, at the age of 62.  President Dwight Eisenhower was the first Republican president in 20 years.

Dwight continued the New Deal and Fair Deal programs already in place.  During his two terms, Alaska and Hawaii were added as states. He also authorized the Interstate Highway System in 1956 and the 1957 Civil Rights Act.  Dwight also signed the bill forming the National Aeronautics and Space Administration (NASA), setting off the space race!  President Dwight Eisenhower again defeated Adlai Stevenson for a second term, winning by an even larger margin!  During his time in office, Dwight had a great relationship with the press, holding over 200 press conferences, more than any president before him.

On June 30, 1956, President Dwight Eisenhower signed a law making “In God We Trust” the official motto of the United States of America.  Two years earlier, he had also signed into law placing the phrase “under God” in the pledge of allegiance.  Both acts were rooted in his belief that America needed to return to the religious values upon which the nation was founded.

Dwight showed his support for desegregation by desegregating the Armed Forces and the District of Columbia.  In 1957, when the Arkansas governor refused to obey the Supreme Court decision of Brown vs. Board of Education which desegregated schools, Dwight ordered the governor to comply.  When the governor refused, Dwight placed the Arkansas National Guard under federal control. He also sent the 101st Airborne Division to escort and protect nine black students in Little Rock Central High School.

The majority of his presidency was dominated by foreign policy, primarily the Cold War withe Soviet Union.  Dwight worked to build a relationship with Soviet Union, however continued turmoil in Moscow hindered that relationship.  Dwight spoke to the United Nations General Assembly of using atomic energy for peaceful uses.  He fulfilled a campaign promise and brought an end to the Korean War on July 27, 1953, with the signing of the Korean Armistice Agreement.

Dwight took a hard stance against communism in Southeast Asia and Central America.  Dwight believed that if one nation was to fall into communism it would create a domino effect.  He sent the first troops into Vietnam in support against communism.  Despite his stance against communism, Dwight did not have a friendly relationship with Senator Joseph McCarthy, nor did he approve of the methods used by Senator McCarthy.  However, due to the uneasy political relationship between the President and Congress, Dwight refrained from publicly speaking out against McCarthy.  Dwight established the tradition of Executive privilege in order to protect his staff from McCarthy’s investigation.

In 1955, shortly before he announced that he would run for a second term, Dwight had a heart attack while on vacation in Denver, Colorado.  He remained in the hospital for seven weeks, and further recuperated on his farm in Gettysburg.  With his doctor’s approval, he successfully sought re-election.  On June 8, 1956, Dwight underwent surgery at Walter Reed after being diagnosed with Crohn’s disease.  On November 25, 1957, he suffered a mild stroke in the Oval Office, leading to slight speech impediment.  The following year, Dwight ensured that if he was no longer able to perform his duties as president, Vice-President Richard Nixon could assume power (the 25th Amendment).

Dwight was the first president to serve under the 22nd Amendment (limiting an individual to two terms as president).  He was also the first president entitled to receive a lifetime pension, state-provide staff, and a Secret Service detail.  Dwight campaigned in support of Richard Nixon, however, he narrowly loss to John F. Kennedy.  Dwight retired to his working farm in Gettysburg, and donated it to the National Park Service in 1967.

President Dwight Eisenhower died from congestive heart failure on March 28, 1969, at Walter Reed Army Hospital.  He was 78 years of age.  He received a state funeral at the capitol and a military funeral in his hometown of Abilene, Kansas.