“A government big enough to give you everything you want is a government big enough to take away everything you have.” He was never elected president by the people.  He was never elected vice-president by the people either.  The Detroit Lions and Green Bay Packers offered him contracts of $200 a game for a 14-game season…how times have changed!  Instead of a professional football player, he could have also become a fashion model!  He modeled for Cosmopolitan and Look magazines.  He is Gerald Rudolph Ford, Jr., 38th President of the United States, serving from August 9, 1974, to January 20, 1977.  Gerald was born Leslie Lynch King, Jr., in Omaha, Nebraska on July 14, 1913. 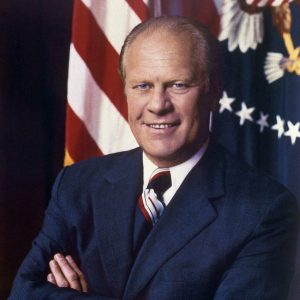 His parent divorced when he was young and his mother remarried and moved the family to Michigan.  Leslie was renamed Gerald R. Ford, after his step-father.  Gerald graduated from the University of Michigan with a degree in economics, one of three presidents who achieved such a degree.  He then attended and graduated from Yale Law School and worked briefly as a lawyer.  He then joined the United States Navy after the attack on Pearl Harbor.  During his time in the military, he earned several commendations and took part in the battle for Wake Island, Okinawa, and the Philippines.

After returning from war, he enlisting in the United States Naval Reserves.  He then ran for and won, a seat in the House of Representatives. Before accepting his swearing-in, he married Elizabeth “Betty” Bloomer Warren in October 1948.  Gerald spent the next 24 years serving as a representative.  His goal was to become Speaker of the House.  During his time as a Representative, he was a member of the Warren Commission, which examined the death of John F. Kennedy.

Gerald spoke out against President Lyndon Johnson’s handling of the Vietnam War and many of his Great Society Programs, causing criticism from the President.  During his time in the House, Gerald bought a newly invented Polaroid camera and would take pictures and give them away as souvenirs.  Gerald never became Speaker of the House, instead earning the position of House Minority Leader, a position he maintained for eight years.  Gerald became well-liked by his colleagues due to his fair leadership and inoffensive personality.

Gerald was one of nine vice presidents to become President, although he is the only vice president to become President through circumstances other than the President’s death.  Shortly after becoming President, Gerald fully pardoned Nixon, an unpopular decision that likely led to his defeat in the next presidential election.  However, historians agree that this was the right decision, as it allowed the nation to heal and move on from the Watergate Scandal.  Gerald served the fifth shortest term of any president, 896 days, however, it is the shortest of any president who did not die in office.  Gerald faced two assassination attempts while in office.  He began wearing a bulletproof vest after the second attempt.

President Gerald Ford is not known for sweeping changes and reform. Instead, historians view him as the calm force America needed at the time. Gerald also began a conditional amnesty program for Vietnam War draft dodgers. However, it was President Carter that finally granted full pardons.  He also supported the Equal Rights Amendments and special education classes.  During his time in office, Gerald faced an economical recession and growing inflation.

Gerald reluctantly agreed to run for office again in 1976.  First, Gerald battled against his own party candidate Ronald Reagan, before going against Jimmy Carter.  The election utilized televised Presidential debates for the first time since the 1960 election.  Carter believed that these debates are what ultimately helped win him the election.  The election was close, with Carter winning.  Despite the defeat, Gerald and Carter become close friends, with Gerald receiving regular updates on international and domestic issues.  Gerald also had a standing lunch invitation to the White House if he was in Washington.  Even after Carter left office, the two families remained close.

After leaving office, Gerald and his wife retired to Colorado, where he continued to stay active.  Gerald wrote several books and became the first former president to become a millionaire.  Despite his relationship with Carter, Gerald publicly criticized the Carter Administration in favor of the Reagan-Bush ticket in the 1980 election.  In his later years, Gerald began to experience several health problems.  He died on December 26, 2006, at the age of 93, in his home in Rancho Mirage, California.

Gerald Ford was a known Episcopalian.  He described his faith and belief in the Lord as a “deep personal faith.”  Others described his faith as “quiet.”  Before becoming President, Gerald met once a week with close friends for a prayer meeting. It was a tradition he insisted on continuing after becoming President, despite criticism that it was a political strategy session.  Several colleagues noted that any reference made to God in his speeches were genuine and not forced.  In the notes for his autobiography, Gerald writes, “My religious beliefs give me guidance and strength on a day to day basis…Nightly I seek the Lord’s guidance by silent repeating Proverbs 3:5-6.  Daily I seek to live by the example of Jesus Christ.  I have always gained strength from the conviction that way I’ve tried to do is the will of the Lord.”