“Next in importance to freedom and justice is popular education, without which neither freedom nor justice can be permanently maintained.” He was the only preacher to serve as president. He was ambidextrous, as well as multilingual, and could even write Greek with one hand while writing Latin with the other!  He was also the only person to ever be a congressman, a senator-elect, and a president-elect at the same time. He is James Abram Garfield, 20th President of the United States of America. James was born in a log cabin on November 19, 1831, in Orange Township, Ohio. He was the last of six Presidents born in a log cabin. His father 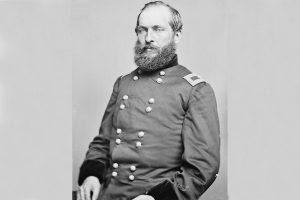 died when he was young and James largely grew up in poverty. He developed a love for reading to avoid other children ridiculing him. James excelled in his academic studies when he finally started at 17!

Jame went on to attend Geauga Academy, becoming an instructor and administrator. He then attended Western Reserve Eclectic Institute, now called Hiram College, before attending Williams College. James graduated from Williams College in 1856 as a salutatorian. While in college, James taught and also worked as a Christian Church (Disciples of Christ) circuit preacher. He experienced a religious awakening as a teenager. He met Lucretia Rudolph at Geauga Academy, and the two eventually married on November 11, 1858. Together they had seven children, five of which survived into adulthood.

Following his graduation from Williams College in Massachusetts, James returned to Hiram in Ohio to teach. He became president of Hiram College in 1857. James’ first foray into politics was being elected to the state senate in 1859.

In 1861, James left the Senate and became a lieutenant colonel in the Union Army. He was soon promoted to brigadier general and was at the Battle of Shiloh in 1862. That summer, James was struck with jaundice and lost a significant amount of weight, forcing him to return home. He returned to the military in January 1863, and he was appointed Chief of Staff to Major General William S. Rosecrans. Due to James’ actions at the Battle of Chickamauga, he was promoted to major general. He later resigned his commission to take a seat in the US House of Representatives.

In 1862, while recovering from jaundice, James won a seat in Congress. He took his seat in December of 1863. James became opposed to moderates, such as Presidents Abraham Lincoln and Andrew Jackson, and became known as an excellent speaker. He supported abolition, even though it made him uneasy, and the exile or execution of rebellion leaders. He also supported equal rights no matter the color of a person’s skin. James advocated against an individual being able to buy their way out of military service, leading to the passage of a conscription bill that excluded this flaw.

In 1865, James began practicing law to improve his finances. This practice led him to Wall Street the day following President Abraham Lincoln’s assassination, where he made an impromptu speech. Although lukewarm about Lincoln during his presidency, James offered praise for the deceased President following his assassination.

In 1879, during his ninth term as a US Representative, President Hayes encouraged James to run for the Governorship of Ohio. James, however, preferred to run for the Senate, which he won in 1880. Following the Senate election, James denied any interest in obtaining the presidency and was committed to supporting John Sherman for president. When the delegates reached a deadlock, James was nominated as a tie-breaker. Surprisingly, he ended up receiving the nomination, with Chester Arthur as his running mate.

James was the only president to be elected directly from the House of Representatives. James was sworn into office on March 4, 1881. Even before his nomination, there were fractures within the Republican party and James worked hard to appease all. During his time as president, James advocated against the spoils system, championed civil rights, and recommended a government-funded education program to empower African-Americans. He also appointed former slaves to prominent government positions. In addition, James worked to reform the Post Office Department, which was ripe with corruption and profiteering, and the US Navy.

President James Garfield had little foreign policy experience, and he relied heavily on his advisors. James supported free trade, believing it was important to develop good relations with the nation’s southern neighbors. James also worked for peace between the warring nations of Chile, Bolivia, and Peru. He also supported the US construction of the Panama Canal.

Four months after being sworn in, on July 2, 1881, James was shot at the Sixth Street Station of the Baltimore and Potomac Railroad in Washington DC by Charles J. Guiteau. Charles began stalking President James Garfield nearly a month earlier after Charles was denied a meeting with the president, and a high-level foreign consulship. (The assassination of President Lincoln was considered a fluke due to the civil war and it was considered unnecessary for the presidents to be protected, with their movements and plans often printed in newspapers.) One bullet grazed James’ arm, while a second bullet lodged behind his pancreas, and was only later found during the autopsy. Robert Todd Lincoln, son of Abraham Lincoln, was at the station and witnessed his second shooting of a president. Charles was arrested, convicted, sentenced to death, and executed on June 30, 1882.

Alexander Graham Bell had developed a primitive metal detector and attempted to locate the bullet, however, it is believed that the metal springs in the bed distorted the image. James survived his injury for 11 weeks. During those 11 weeks, after an initial apparent recovery, James became increasingly weaker, was unable to govern, and was in severe pain. It is believed that James had blood poisoning as a result of his doctor probing his wound with unsterilized hands and instruments. During his illness, the first successful air conditioner was installed in the White House in an attempt to cool James and help relieve his pain. James was moved to Elberon, New Jersey to escape the heat on September 5, 1881. At 10:35 pm, on September 18, 1881, President James Garfield died in Elberon at the age of 49.

Chester Arthur succeeded James as President of the United States. Following the death of James, the Secret Service began guarding the presidents.