“Labor disgraces no man; unfortunately you occasionally find men who disgrace labor.”  He was tone-deaf and failed to recognize most songs.  Hiram, despite being a Civil War hero, only graduated 21st out of 39 students at West Point in 1843.  He did not enjoy his time at the school but managed to distinguish himself as an excellent equestrian.  Unfortunately, due to his poor grades, Hiram was denied entry into the Calvary.  Hiram was eventually elected president, although it may never have happened if he had chosen to attend Ford Theater with Abraham Lincoln the night Lincoln was shot, instead of visiting his children in New Jersey. 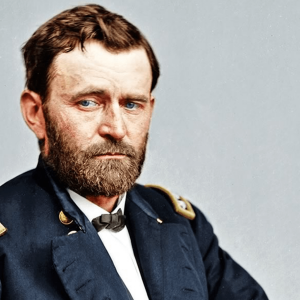 Having trouble recognizing this American President born on April 27, 1822, in Point Pleasant, Ohio?  Perhaps you will recognize this name better: Ulysses S. Grant, who served as president from March 4, 1869, until March 4, 1877.  Born Hiram Ulysses Grant, it was during an administration error at West Point that he became known by the moniker we recognize today.

Although Ulysses did not excel at West Point, he did excel during his career in the military, serving in both the Mexican War and the US Civil War.  Ulysses, while young during the Mexican War, later described it as a “wicked war,” but said that at the time, did not have the moral courage to resign.  He served as a quartermaster during the war, under General Zachary Taylor.  He had the chance to closely observe military tactics and showed bravery and leadership under fire.  After the Mexican War, he served in several posts on the western coast, eventually resigning in 1854.

Ulysses was rather unsuccessful in civilian life and volunteered for the military again in 1861, shortly after the Civil War began.  His first request was actually lost by the War Department, only found again after the war was over!  Ulysses was eventually, and rather reluctantly, assigned command of an unruly 21st Illinois volunteer regiment.  He proved an apt commander and had the regiment combat-ready within months.  Ulysses continued to gain success throughout the war and held the unique view that defeating the Confederate armies was more important than taking land.  This view led Ulysses to relentlessly track down and destroy General Robert E. Lee’s Army of Northern Virginia.  This lead to Lee’s surrender, and the end of the war, on April 9, 1865.  After the war, Ulysses was promoted to full general and oversaw a portion of the Reconstruction.

Ulysses was overwhelmingly elected President just three years after his victory over the Confederacy.  He was re-elected in 1872 with 55 percent of the popular vote and 256 of the 352 electoral votes.   President Ulysses S. Grant was the first President to have both of his parents alive for his inauguration.   Ulysses’ presidency was during a difficult time for this country.  The war, and loved ones lost, were still fresh in the minds of many people.  Reconstruction was underway for the South and southern politicians were denying blacks the right to vote.  President Ulysses S. Grant fought against this, advocating for the passage of the 15th Amendment (which prohibits a person from being denied the right to vote based on race) in 1869, and for the Civil Rights Act, which passed in 1875.  Ulysses also oversaw the admittance of Colorado as a state and established the first national park: Yellowstone.

President Ulysses S. Grant was also involved in several scandals during his term, including being accused of driving up the price of gold (he actually foiled the plans of those who were responsible).  Another scandal involved his vice president and members of congress stealing from the Union Pacific Railroad and attempting to cover it up.  President Ulysses S. Grant protected his personal secretary from being punished for failing to pay taxes.  His secretary of war was also impeached for accepting bribes.  Near the end of Grant’s presidency, the Battle of Little Big Horn occurred, disrupting relations with the Sioux nation.

After leaving office, Ulysses traveled for with his wife, Julia Boggs Dent for awhile before they settled down in Illinois.  Ulysses lost everything after borrowing money to help his son start a business, as his son’s business partner turned out to be a scam artist.  Shortly thereafter, he was diagnosed with throat cancer, likely from the thousands of cigars he had gone through.  Ulysses often chewed through cigars instead of smoking them.  To provide for his wife, Ulysses made a deal with author Mark Twain. Ulysses agreed to write his memoirs, which he finished days before his death.  Ulysses S. Grant  on July 23, 1885.  His book provided nearly half a million dollars for his family.  Ulysses, who died at the age of 63, and his wife are buried in the largest mausoleum in North America.