“We can not right matters by taking from one what he has honestly acquired to bestow upon another what he has not earned.” He is the first president to have his voice preserved by means of recording.  He was also the first president to have electricity in the White House, however, he and his wife were so fearful of being electrocuted, that they refused to touch the light switches, often sleeping with the lights on!  He was also the only president to lose a presidential re-election to a former president.  He is Benjamin Harrison VI, 23rd President of the United States, serving from March 4, 1889, until March 4, 1893.  Benjamin, the grandson of William Harrison, 9th President of the United States, and great-grandson of Benjamin Harrison V, signer of the Declaration of Independence, was born on August 20, 1833, in North Bend, Ohio. 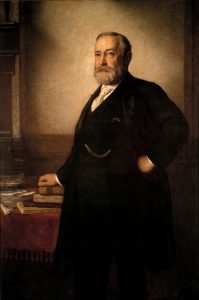 Benjamin’s family was one of the First Families of Virginia, with roots going all the way back to Jamestown.  Benjamin attended Farmer’s College, where he met his first wife, Caroline Scott.  In 1850, he transferred to Miami University in Oxford, Ohio, and went on to study and practice law. In 1853, Benjamin married Caroline, in a ceremony, that her father, a Presbyterian minister, presided over.  Benjamin and Caroline were both also Presbyterian.  In 1856, Benjamin joined the Republican party and was elected Indianapolis City Attorney.  Two years later, Benjamin opened his own law practice with William Wallace.  Benjamin remained active in politics, becoming Reporter of Decisions for the Indiana Supreme Court in 1860.  That same year, Benjamin opened a new law firm with William Fishback.

The Civil War interrupted Benjamin’s political ambitions, as he joined the Union Army as a captain and company commander in 1862.  Benjamin went on to participate in Sherman’s Atlanta Campaign.  By the conclusion of the war, he had reached the rank of brigadier general.  Throughout the war, he maintained his position as Reporter of Decisions, which provided his family with a steady income, as well as kept him politically active.

Upon returning from the war, Benjamin ignored urgings to run for Congress, instead choosing to speak on behalf of other politicians, a task for which he was highly praised.  In 1872, Benjamin unsuccessfully campaigned to receive the nomination for governor of Indiana.  This defeat led Benjamin to return to his law practice, in which he was successful.  Benjamin continued to serve in a small capacity as needed.

In 1880, Benjamin was elected as a United States Senator for Indiana.  Benjamin also campaigned for James Garfield, who was running for president.  Upon his election, the president offered Benjamin a cabinet position.  Benjamin respectfully declined the offer, instead choosing to remain in the Senate, where he served until 1887.  During his time in the Senate, Benjamin campaigned for generous pensions for veterans and their widows and greater educational opportunities for Southerns, including African Americans.  Benjamin lost his re-election bid in 1886, due to a re-drawing of the districts by the Democrats.

Following his defeat, Benjamin returned to his law practice but stayed politically active.  In 1888, the Republican Party favorite, James G. Blaine, withdrew his name from contention for the Presidential nomination.  Ultimately, Benjamin was selected to run in his place.  Although he lost the popular vote by 90,000, he carried the electoral college, defeating incumbent Grover Cleveland, leading many to claim the election was corrupt.  President Benjamin Harrison was inaugurated 100 years after George Washington was inaugurated as 1st President of the United States.

During his presidency, six states – a record! – were admitted into the Union: North Dakota, South Dakota, Wyoming, Montana, Washington, and Idaho.  A deep rivalry existed between North and South Dakota, which were both signed into the Union on November 2, 1889. Due to the rivalry, Benjamin ordered that the papers be shuffled and he not see the states’ names when signing.  To this day, no one knows which state was admitted first, although North Dakota has gained the title of the 39th state because it came first alphabetically.

Also during his presidency, Benjamin oversaw the last major American Indian battle, the Battle of Wounded Knee, in which over 100 Sioux, including many women and children, were killed.  Another domestic issue facing President Benjamin Harrison was civil rights for Negros.  Despite Benjamin’s attempts, congress consistently denied approval for such bills.

As the re-election approached, Benjamin’s popularity began to decrease, along with his wife’s health.  What had once been a national surplus had turned into a deficit, and Benjamin was accused of wasteful spending.  Some of the surplus had been spent on the Dependent and Disability Pension Act which provided pensions to disabled veterans, regardless of the cause of their disability.  Benjamin also greatly increased the number of naval ships, further depleting government funds.  Additionally, Benjamin chose to not actively campaign, instead, he stayed with his wife and cared for her.  Caroline died two weeks before the election, which Grover Cleveland, his opponent, decisively won.

After leaving the White House, Benjamin briefly lived in California, giving lectures at Stanford University.  He also traveled around the nation giving speeches in support of William McKinley.  In 1896, Benjamin was married to Mary Scott Lord Dimmick, a woman 25 years his junior and of whom his two children disapproved. He also returned to his law practice.  He went on to try a case before the Supreme Court of the United States, one of three former presidents to do so (John Quincy Adams and Grover Cleveland being the other two.