“Nothing brings out the lower traits of human nature like office-seeking. Men of good character and impulses are betrayed by it into all sorts of meanness.” He was the first president to graduate from law school (previous presidents had studied under other lawyers). He banned wine and liquor from the White House, much to the displeasure of guests. Also, he hosted the first White House Easter Egg Roll. He is Rutherford Birchard 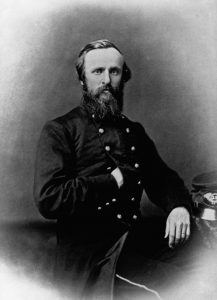 Although his mother never remarried, Rutherford looked up to his uncle, who became a father figure and contributed to his early education. Rutherford ultimately graduated from Harvard Law School in 1845 and began practicing in Sandusky, Ohio. He moved to Cincinnati in 1849, where he first became active in the Republican Party.

On December 30, 1852, Rutherford married Lucy Webb, who graduated from Wesleyan Women’s College, making her the first First Lady to have graduated from college. Lucy was a Methodist and supported the abolition of alcohol and slavery. Her views influenced Rutherford’s behavior, although Rutherford never formally joined the Methodist church.

Rutherford first gained attention as an attorney for his defense of criminals, specifically his defense of several accused murderers and of escaped, runaway slaves. His defense of slaves, and support of abolition, continued to gain him prominence within the Republican party. In 1856, Rutherford refused a nomination for a judgeship. In 1858, he eventually accepted the office of City Solicitor from the city council when it became vacant. He went on to win a full, two-year term from the people in the 1859 election.

Following the election of Abraham Lincoln, several Southern states seceded, and Rutherford was lukewarm over the idea of using a civil war to restore the Union.  However, Rutherford joined the Army after the war began. During his time in the military, Rutherford served with future president William McKinley. Rutherford rose to the rank of major general and suffered severe injuries during the Battle of South Mountain. Although the Civil War did not end until 1865, in 1864, Rutherford was nominated to run for a seat in the House of Representatives. Despite refusing the leave the Army and campaign, Rutherford won the seat, beating out the incumbent.

Rutherford disagreed with many of the actions of then-President Andrew Jackson. Rutherford supported the 14th Amendment and wanted to ensure that the southern states were re-admitted to the Union with laws in place to protect the newly freed slaves. He did not agree with the president pardoning many leading members of the Confederacy. Rutherford worked to pass the Civil Rights Act of 1866, and the Tenure of Office Act. Rutherford won re-election in 1866, but resigned in July of 1867 to run for governor of Ohio, to which he was elected.

As Governor of Ohio, Rutherford had a limited role, as he had no veto power and an opposing legislature for his first term. In Rutherford’s second term, he enjoyed a Republican legislature and had their support to ratify the 15th Amendment of the United States Constitution, guaranteeing black suffrage. Rutherford also helped establish what would go on to become Ohio State University. He looked forward to retiring in 1872, following his second term.

Rutherford returned to the position of governor in 1875. His success as governor elevated him to the top of the Republican party, leading to a nomination for the Republican presidential candidate. Rutherford and William Wheeler (the vice-presidential candidate) ran against Samuel J. Tilden. Rutherford and Samuel shared many similarities, including a reputation for honesty and supporting civil reform. The election was close, with Tilden appearing to win, but falling one vote short of the necessary majority of the electoral college. The votes from Florida, Louisiana, and South Carolina, along with some of Oregon’s votes, were in dispute due to fraud by both parties. In January of 1877, with the votes still disputed, President Grant authorized an Electoral Commission to determine the outcome of the election.  Rutherford was determined the winner.

President Rutherford Hayes became the first President of the United States to be sworn in inside the White House on Sunday, March 4, 1877. He was sworn in publicly on the following Monday. Rutherford was sworn in secretly due to discontent over his election. As part of the agreement to his election, Rutherford ended the Reconstruction in the South, returning it to home rule. Rutherford continued to support equal rights but was blocked often by an opposing House. One of the first issues President Rutherford Hayes was forced to deal with was the Railroad Strike of 1877. Railroad workers went on strike following several wage cuts that year. Rutherford was forced to send in federal troops to end riots and force workers to return while their pay cuts remained.

Rutherford was against the spoils system, which is giving federal jobs to political supporters. Instead, Rutherford believed, and acted accordingly, that jobs should be given to those most qualified. These reforms were unpopular among both parties and Rutherford was unable to abolish the spoils system, although he did improve it. Chinese immigrants were blamed for the Railroad Strike, and before that, the Panic of 1873, leading to many wanting to restrict the flow of Chinese immigrants.  This went against a previously signed treaty with the Chinese. Rutherford refused to support the 1879 act limiting Chinese immigrants, leading many to call for his impeachment.

Internationally, President Rutherford Hayes mediated a territorial dispute between Argentina and Paraguay. Paraguay responded to his help by renaming a city after him, Villa Hayes. Rutherford also granted permission to the Army to pursue bandits into Mexico, an act that angered the Mexican president. Bandits would often cross the Mexican border in Texas, raid towns and ranches before crossing back into Mexico, where the Army could not pursue them. Rutherford and the Mexican president reached an agreement in which both countries would work together to pursue the bandits. Additionally, Rutherford agreed to not allow Mexican revolutionaries to build armies in the States. This agreement decreased violence along the border.

Rutherford refused to run for a second term, allowing James Garfield to succeed him. Following his retirement, Rutherford advocated for educational charities and was appointed to the Board of Trustees for Ohio State University. He also advocated for federal aid for education. Lucy Hayes died in 1889, which greatly grieved Rutherford. Rutherford died of a heart attack on January 17, 1893, in his home in Spiegel Grove, Ohio. He was 70 years of age.