“When there is a lack of honor in government, the morals of the whole people are poisoned.” He was the first millionaire to become President and donated his presidential salary to charity. He and his wife spoke Mandarin Chinese in the White House to avoid being eavesdropped upon. Both the Republican and Democratic Parties wanted him to run for the presidency, his first publicly elected office. He is Herbert Clark Hoover, 31st President of the United States, serving from March 4, 1929, until March 4, 1933. Herbert was born on August 10, 1874, in West Branch, Iowa.* His parents both died before his ninth birthday and Herbert was sent to live with his uncle. 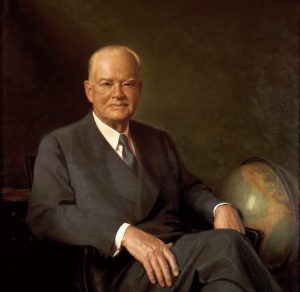 Herbert was not treated kindly by his uncle and performed hard, physical labor, six days a week.  After his uncle went into real estate, Herbert learned bookkeeping and typing while attending a business college at night. He later was part of the first class to attend Stanford University.  Herbert married his wife, Lou Henry, in 1899. For several years Herbert worked as a mining engineer, during which time he and his wife lived around the world, including China where they learned to speak Mandarin. Herbert and his wife were in China during the Boxer Rebellion. During this time, Herbert helped organize relief efforts for foreigners. By 1912, Herbert had become a millionaire.

Herbert worked for the government during World War I, by creating ways to save food and supplies for the American troops. Following the end of World War I, he administered food and humanitarian aid in Europe, becoming very popular due to his success. He was appointed by President Warren Harding as Secretary of Commerce. At that time, the Department of Commerce had only been around for eight years and had vaguely defined responsibilities. Herbert, during his time as Secretary of Commerce, firmly established the department creating numerous committees and sub-departments to regulate a variety of activities, including air travel, radio, census, and manufacturing. Herbert would even take control of other departments’ responsibilities if he felt they were not properly carrying out their responsibilities. In the capital, Herbert became knowns as “the Secretary of Commerce…and Under-Secretary of Everything Else!”

By 1928, Herbert was well-known in political circles and frequently overshadowed President Harding and President Coolidge. When President Coolidge announced he was not going to seek re-election, the republican party chose Herbert as his replacement. Herbert was elected President, winning 40 out of the 48 states. He was a Quaker, however, and refused to take the Presidential Oath of Office, instead affirming his presidency. Herbert’s vice-president, Charles Curtis, was the only non-white elected vice-president; Charles was a Kaw Indian.

Shortly after becoming President, the stock market crashed and the United States entered what has become known as the Great Depression. President Herbert Hoover attempted to counter the depression with tax cuts and encouraging businesses to retain employees. Unfortunately, Herbert’s efforts were not enough, as millions of people lost their jobs and their homes. Additionally, Herbert signed into law the Smoot-Hawley Act, which raised taxes on imports. This caused nations to reject American-made goods, furthering the nation’s depression. However, while the country was in the midst of the Great Depression, President Herbert Hoover was often served 7-course meals, some of the most elaborate meals ever served at the White House.

Many of Herbert’s ideas, including tax cuts and public works projects, later became part of Roosevelt’s New Deal. Herbert, however, would go on to criticize and attack Roosevelt’s efforts and government programs.

In June of 1932, shortly before the presidential election, thousands of military members and their families camped outside of Washington, DC, and demanded their pension payment immediately. Herbert sent the US Army, led by General Douglas MacArthur (assisted by Dwight D.

Eisenhower and George S. Patton, who were not yet generals) to remove the demonstrators but not to use military force to remove them. General MacArthur ignored the order, causing two deaths and hundreds of injuries. Although Herbert was furious with General MacArthur, Herbert refused to publicly reprimand him, an act which was condoned by all and hurt his re-election bid.

President Herbert Hoover was soundly defeated by Franklin Roosevelt, winning only six states. During his campaign, the Secret Service stopped numerous assassination attempts and Herbert was frequently heckled during his speeches.

After leaving office, Herbert and his wife spent time in New York before returning to their home in California. Herbert remained out of the public eye after his failed bid for re-election. Throughout his life, he received more than 50 honorary degrees from various universities. He died on October 20, 1964, in New York City, at the age of 90, from massive internal bleeding. Herbert’s health had been suffering for the past several years.