“Every good citizen makes his country’s honor his own, and cherishes it not only as precious but as sacred. He is willing to risk his life in its defense and is conscious that he gains protection while he gives it.”  This is the only president to have his birth state in question and the first of six presidents to be born in a log cabin.  He was the only president who was a first-generation American, as he was born to immigrant parents before the United States became a nation.  He is Andrew Jackson, the seventh president of the United States of America, serving from March 4, 1829, until March 4, 1837.  Andrew was born on March 15, 1767, in Waxhaws.  The Waxhaws settlement was in South Carolina, however, it was extremely close to the North Carolina border.  Historians cannot definitively say in what state he was born.  Growing up, Andrew’s education was inconsistent.  He served as a courier during the Revolutionary War.  By the age of 14, he was orphaned.  Andrew went to live with his uncles and began studying law, being admitted to the bar in 1787. 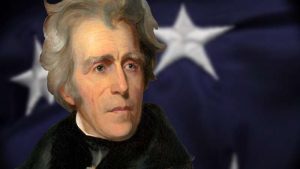 Andrew had been appointed commander of the Tennessee militia in 1801.  He continued to hold this position during the War of 1812, where he led his men to victory against the Creek Indians at Horseshoe Bend.  His success earned him the rank of major general.  On January 8, 1815, Andrew, outnumbered, defeated British troops in New Orleans.  He became a national hero, earning the nickname “Old Hickory,” after being described as “tough as old hickory wood” on the battlefield.  Andrew continued to serve in the military during the First Seminole War, capturing parts of Florida and then serving as Florida’s military governor.

Andrew returned to politics in 1822, after he was once again elected to the United States Senate.  He was nominated to run for President in 1824 but was defeated by John Quincy Adams in what became known as the Corrupt Bargain.  This bargain also split the Democratic-Republican Party.  In 1825, three years before the next presidential election, Andrew was once again nominated and selected to run for president!  He easily won the election in 1828 and became the first president to invite the public to attend his inauguration ball at the White House.

President Andrew Jackson was the first and only President to pay off the national debt.  He was also accused of wasteful government spending for purchasing spittoons for the East Room in the White House, even though the spittoons likely saved the carpet!  Andrew was extremely popular with the public, earning the nickname the “people’s president.”   He believed that the people should elect the president and vice-president and wanted to abolish the electoral college.

Andrew was the first president to make use of his veto power, vetoing the re-charter of the Second Bank of the United States.  Andrew displayed hostility towards the bank and alleged that it had a disproportionate economic privilege.  His view was supported by the public and helped him win his second term.  Not all of Andrew’s actions were as supported.  His dealings with the Native Americans have come under scrutiny, especially his forced removal of Indians from their lands, which led to great suffering, such as the Trail of Tears.

President Andrew Jackson also faced threats of succession from southern states, including one led by his first Vice-President John C. Calhoun, who was from South Carolina.  Southern states were upset with the high tariffs on imported goods from Europe, claiming they only benefitted northern industrialism.  South Carolina determined that it had the right to nullify any federal laws that went against the state’s interests.  President Andrew Jackson threatened military action against any state attempting to void federal laws.  Jackson denied the states’ rights to succeed: “The Constitution… forms a government not a league… To say that any State may at pleasure secede from the Union is to say that the United States is not a nation.”  One year later, after a compromise was reached, Jackson stated “the tariff was only the pretext, and disunion and southern confederacy the real object. The next pretext will be the negro, or slavery question.”  Sure enough, nearly 30 years later, South Carolina was the first state to succeed over slavery!

Andrew Jackson was born and raised as a Presbyterian.  Frequently in his letters to his wife, Rachel (who died shortly before he became President), Andrew would refer to the Lord and to his prayers for her safety and protection.  During an undated meeting with Reverend Peter Cartwright, a young lawyer asked Cartwright if he really believed in hell.  When Cartwright affirmed his belief the lawyer replied, “Well, I thank God I have too much good sense to believe any such thing.”  To Cartwright’s surprise, Andrew replied “Well, sir, I thank God that there is such a place of torment as hell.”  The young lawyer inquired as to why he would want such a place as hell to exist.  Andrew responded, “To put such damned rascals as you are in, that oppose and vilify the Christian religion.”  Upon his death bed, Andrew commanded his children, many of whom were adopted, not to cry for him, after all, they would be together in heaven one day.  Andrew died on June 8, 1845, at the age of 78, from lead poisoning.  Andrew had two bullets lodged in his chest for several years.  One of the bullets was the result of a duel that occurred prior to his election for president.