“The man who reads nothing at all is better educated than the man who reads nothing but newspapers.”  He did not consider being president one of the top three achievements of his life.  He helped restock the Library of Congress after it was burned with 6,487 of his own books!  As an early archeologist, he attempted to build a skeleton of a mastodon in the White House.  Although he was a gifted writer – helping write the US Constitution – he was not a good public speaker.  He is 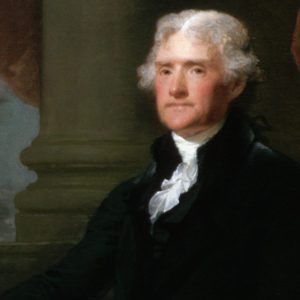 Thomas Jefferson, the third President of the United States of America (March 4, 1801–March 4, 1809)!  He is a Virginian by birthright and was born on April 13*, 1743, at Shadwell Plantation, Goochland County, Virginia, as the third child of Peter and Jane (Randolph) Jefferson.

Little is known of Jefferson’s youth.  Education is the only surviving recollection of the life of young Thomas Jefferson.  Peter Jefferson, Thomas’ father, cherished education.  Peter was a self-educated man; a vociferous reader who saw that Thomas had the formal education that he never had. This belief required Thomas to spend a great deal of time away from Shadwell during his early years being formally educated.  This experience appears to have created conflict for Thomas, not with his father, Peter, but with contemporary religious thought of the time.

Thomas married Martha Wayles Skelton, his third cousin, on January 1, 1772.  Martha, a widow, shared her husband’s passion for reading and was a skilled pianist, who often had Thomas accompany her on the violin or cello.  Martha was able to manage the large house and together the couple had six children, two of which survived into adulthood.  Sadly, Martha died on September 6, 1782, leaving Thomas grief-stricken.  Thomas fulfilled his deathbed promise to Martha and never remarried.  However, DNA evidence indicates that Thomas had an affair with one of his slaves, Sally Hemings, and fathered her children.

As Americans, we see our third President as the author of the Declaration of Independence, the Louisiana Purchase, the Lewis and Clark expedition, the formation and construction of the United States Military Academy at West Point, New York; Native American Policy, relocating American Indians west of the Mississippi River; and signer of the Act Prohibiting the Import of Slaves on Mach 7, 1807, which abolished the slave trade in the United States beginning January 1, 1808.

Jefferson’s view of himself can best be seen through the home he designed, built, and loved throughout his lifetime in central Virginia’s Albemarle County: Monticello. He was a student of architecture, law, and horticulture. He maintained journals concerning the happenings of nature at Monticello. He was conflicted by religious leaders and sought to understand liberty, freedom, and independence. He saw himself as a man of the world seeking knowledge with unbridled passion. His passion for education led him to found the University of Virginia in Charlottesville, Virginia. It appears to this outsider looking in – Thomas Jefferson enjoyed observing and contemplating upon his observations.  Jefferson himself expressed what he valued most in the simple concise statement he wrote for his gravestone:

“Here was buried Thomas Jefferson Author of the Declaration of Independence, of the Statutes of Virginia for religious freedom, Father of the University of Virginia, because of these, as testimonials, that I have lived, I wish the most to be remembered.”

Jefferson’s grave marker expressed what he valued most in life: freedom for all mankind to choose their path in life, freedom to practice individual faith or lack thereof, and the ongoing quest for understanding. It fails to mention that he was President of the United States. Maybe Mr. Jefferson came to know; to understand that genuine freedom is more important than government to establish a great nation filled with people, like our third President, seeking to be the best they can be making a better life for all who share in liberty. His epitaph echoes the values of the country he helped found over 200 years ago. Thomas Jefferson died at his beloved Virginia home, Monticello, on July 4, 1826.  He was 83 years old.