“There are plenty of recommendations on how to get out of trouble cheaply and fast. Most of them come down to this: Deny your responsibility.”  Although a US Representative, he also served in the Navy in World War II, where he earned the Silver Star.  He is one of four people to have served in four elected federal offices: Representative, Senator, Vice President, and President. He was the first president to be sworn in on an airplane, although it was not in flight.  The airplane was on Texas soil, making him the only president sworn-in in Texas.  He was the first and only president to be sworn in by a woman.   He is Lyndon Baines Johnson, 36th President of the United States, serving from November 22, 1963, until January 20, 1969.  Lyndon was born on August 27, 1908, near Stonewall, Texas. 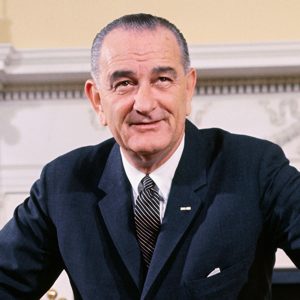 He had a love for learning at a young age, running a mile to school at the age of four.  Lyndon’s father and grandfather were members of the Christadelphian Church, which claims that its beliefs are based entirely on the Bible. However they reject many current teachings of Christianity (such as the Trinity), claiming that mistakes occurred through translation errors.

Lyndon’s father, State Senator Sam Johnson introduced him to the world of politics during his childhood.  Lyndon often campaigned with his father.  He planned on being president from a young age.  Lyndon attended and graduated from Texas State Teachers’ College (now Texas State University) and went on to briefly teach before entering politics.  He married his wife, Claudia Alta “Lady Bird” Taylor on November 17, 1934, after attending Georgetown University Law Center for several months.

Lyndon entered politics in 1930 by becaming a legislative secretary for Congressman Richard Kleberg.  Texas State Senator Welly Hopkins recommended Lyndon for the position.  As a legislative secretary, a group of Congressional aids chose Lyndon to be their speaker.  This position allowed him to begin developing relationships with Congressmen, newspapermen, and lobbyists.

From April 10, 1937, until January 3, 1949, Lyndon was a United States Representative and became trusted by President Franklin Roosevelt.  Lyndon supported Roosevelt’s New Deal plan and supplied Roosevelt with information regarding internal politics in Texas.  After the United States entered World War II following the attack on Pearl Harbor, Lyndon joined the Naval Reserve and asked for a combat assignment.  He was denied but later given a special assignment by President Roosevelt to report on the conditions in the Southwest Pacific, where his plane was allegedly shot at by the Japanese.  This claim is disputed by the various members of the flight crew.

In 1948, Lyndon was elected as a US Senator in a highly controversial election, with charges of fraud on all sides.  Lyndon quickly advanced in the Senate, due in large part to his ability to form friendships with the older Senators.  From 1951 to 1953, Lyndon served as Senate majority whip.  In January 1953, Lyndon was elected Senate minority leader, the most junior senator to ever hold the position.  In 1954, Lyndon’s party regained power in the Senate and Lyndon became Senate majority leader.

During his time in the Senate, Lyndon supported and helped pass many of President Dwight D. Eisenhower’s plans.  In 1955, Lyndon suffered a near-fatal heart attack, which was linked to his 60-cigarettes-per-day habit.  Lyndon quit smoking, with a few exceptions, and did not resume until after he left the White House.  In 1960, after failing to obtain the nomination for the Democratic Presidential ticket, Lyndon was offered the vice-presidency by John F. Kennedy.

As vice-president, Lyndon helped secure the votes of the Southern Democrats, which led to a victory over Richard Nixon by a small margin.  During his time as vice-president, Lyndon headed the space program, oversaw negotiations on the nuclear test ban treaty, and supported equal opportunity legislation for minorities.  However, his lack of influence with President Kennedy frustrated him.

On November 22, 1963, immediately following the assassination of John F. Kennedy, Lyndon was sworn in as President of the United States by US District Judge Sarah T. Hughes aboard Air Force One.  There was no Bible was onboard, so Lyndon used a Roman Catholic missal (a book containing instructions for mass) found in Kennedy’s desk for his swearing in.  President Lyndon Johnson then immediately returned to Washington DC, to show a smooth transition of power for the grieving nation.  His quick actions called some to question him as being too eager to assume power.

To quell rumors surrounding Kennedy’s death, one of President Lyndon Johnson’s first acts was to put together a commission to investigate Kennedy’s death.  Chief Justice Earl Warren headed the commission.   The Warren Commission unanimously determined that Lee Harvey Oswald was alone responsible for the death of President Kennedy.  Lyndon promised to honor Kennedy by passing the Civil Rights Act, which was passed in 1964.  President Lyndon Johnson also continued to support many of former President Kennedy’s programs.  He also had many of his own bills, such as tax cuts, passed by Congress.

In 1964, Lyndon was elected President by a high majority.  President Lyndon Johnson continued his work on civil rights, which he had supported for years, through the passage of the Civil Rights Act and the Voting Rights Act.  Lyndon also championed and signed into law many social programs, including Medicare, Medicaid, Head Start, food stamps, Work Study, and the Economic Opportunity Act.  These programs aided education, promoted urban renewal, beautification, conservation, and controlled and prevented crime.  Lyndon also declared a “War on Poverty.”  Lyndon was a great supporter of the space program.  He oversaw the travesty of Apollo 1 and the success of Apollo 8 orbiting the moon.  These paved the way for Apollo 11 to land on the moon six months later.

During his Presidency, Lyndon increased the number of soldiers on the ground in Vietnam.  Lyndon also gained permission to use military force without consulting the Senate.  As his presidency wore on, public support for Lyndon and his policies, especially regarding Vietnam, continued to decline.  His waning popularity and uncertain health prompted him to announce that he would not be seeking another term as President, although he was eligible since he served less than 24 months of Kennedy’s term.

In January 1969, Lyndon left Washington and returned home to Stonewall, Texas.  After leaving office, Lyndon embarked on what some historians have called a self-destructive path, indulging in cigarettes and gaining weight.  He died at his ranch on January 22, 1973, following a massive heart attack.  He was 64 years of age.