“As we express our gratitude, we must never forget that the highest form of appreciation is not to utter words, but to live by them.”  He was the first president to be born in the 20th Century.  Lobster stew and New England clam chowder were among his favorite foods.   He was the first president to have been a boy scout, to have served in the Navy, to have won a purple heart, and to win a Pulitzer Prize.  His right leg was 3/4 inch longer than his left, causing him back pain which would occasionally require him to use crutches, although he never used them in public.  He is John Fitzgerald “Jack ” Kennedy, better known as JFK, 35th President of the United States, serving from January 20, 1961, to November 22, 1963. 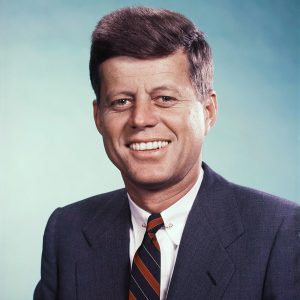 Jack was born on May 29, 1917, as the second of ten children, in Brookline, Massachusetts.  He was first raised in Brookline, but moved to the Bronx, New York, during his middle school years, before being sent to a private school in Connecticut.  Following his graduation from high school, he went on to attend Princeton University for six weeks.  He then enrolled at Harvard College, where he was a member of the varsity swimming team.  During college, Jack traveled throughout Europe, the Soviet Union, the Balkans, and the Middle East.

Following the outbreak of World War II, Jack joined the Navy.  He earned the Purple Heart when his ship was struck.  He helped save the lives of many of the men on board, which also earned him the Navy and Marine Corps Medal of Honor.  Jack was honorably discharged shortly before the Japanese surrender in 1945.  Jack’s brother, Joe, Jr., was killed during the war.  It had been expected that Joe would become involved in politics and eventually make a run for President.  With his death, that responsibility fell to Jack.

Jack began his political career at the age of 29, one year after leaving the military.  He was elected to the House of Representatives, where he served for six years.  In 1952, Jack ran and won a US Senate seat.  In 1953, he married his wife, Jacqueline Bouvier.  During his first two years as a Senator, Jack was frequently absent, due to severe illness and needing several spinal operations.  At one point, Jack, a Roman Catholic, was so ill, that he received Catholic last rites.  In 1958, Jack again ran for Senator and won.

In 1960, JFK narrowly defeated his opponent, Richard Nixon, for the presidency in the popular vote by approximately 120,000 votes. However, JFK won 303 electoral votes, compared to Nixon’s 219 electoral votes.  Kennedy was a well-known, published author by this time.  He also suffered from Addison’s disease, along with back pain from his time in the Navy.  His son, John F. Kennedy, Jr. was born after he was elected.  JFK was sworn into office on January 20, 1961, and his inaugural address included the now-famous quote “ask not what your country can do for you, but what you can do for your country.”

Kennedy suffered an early setback in his presidency, when, in April of 1961, the invasion of the Bay of Pigs in Cuba failed to overthrow Dictator

Fidel Castro.  This disaster caused him to state, “How could I have been so stupid.”  The following year, in October of 1962, he ordered a blockade of Soviet ships going into Cuba, leading to the Cuban Missile Crisis.  President John Kennedy also faced problems in Germany, which included the construction of the Berlin Wall.  During his first months in office, Kennedy introduced the creation of the Peace Corps, which was approved by Congress.

Domestically, President John Kennedy sought to advance the space race and in May of 1961, he announced that the United States would have a man on the moon by 1970.  His prediction came true, although he was not around to see it.  Neil Armstrong walked on the moon on July 20, 1969.  Kennedy also increased the minimum wage, cut taxes, and increased Social Security benefits.  Kennedy believed in racial integration and signed a bill of affirmative action for government contractors.  As president, he intervened at least twice to allow black students to attend college.  In June of 1963, Kennedy gave a radio address on civil rights.  Many of his ideas were later incorporated into the Civil Rights Act of 1964.

On November 22, 1963, President John Kennedy, and his wife, Jacqueline, were visiting Texas Governor John Connally, and his wife Nellie.  During a parade through town, President Kennedy was shot twice.  He was pronounced dead less than a half-hour later.  Lee Harvey Oswald was arrested for the assassination of JFK.  Oswald was shot two days later by Jack Rudy.  Kennedy was the fourth President of the United States to be assassinated and the eighth president to die while in office.  Kennedy was 46 years old when he died, the youngest of any president.