“You cannot escape the responsibility of tomorrow by evading it today.” On February 12, 1809, a child was born in a log cabin.  The child became a man, a great orator who could not tell a lie, or so the story goes.  His picture is on the five-dollar bill and stamped on every penny.  He has a colossal statue in Washington, DC.  He is instantly recognizable in any school play.  Just look for the little boy with the fake beard and tall hat.  Coincidently, he was also the first president to have a beard.  He was once called two-faced by an opponent to which he responded “If I had another face, do you think I’d wear this one?”  He is Abraham Lincoln, 16th President of the United States, serving from March 4, 1861, to April 15, 1865.  Abraham was born on February 12, 1809, in Hodgenville, Hardin County, Kentucky. 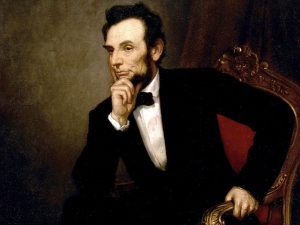 Abraham was the first president born outside of the original 13 states.  He was close to his mother until she died when he was nine years of age.  After his death, he grew to resent his father and the hard work required of him.  Abraham did come to bond with his stepmother, who helped develop his love of reading, even though it is unlikely that she could read.

In 1830, Abraham and his family moved to Macon County, Illinois.  Shortly thereafter, the family moved again and Abraham set out on his own, doing manual labor to provide for himself.  Over the next several years he worked as a shopkeeper, postmaster, and store owner, although he was rather unsuccessful.  It was these jobs that allowed Abraham to develop his communication and oratory skills.  During the Black Hawk War, Abraham made several political connections due to him being elected captain of the volunteers in the area.  The only bloodshed Abraham saw was due to mosquitoes!

Abraham truly began his political career when he was elected to the Illinois State legislature in 1834.  It was during this time that Abraham began to develop his view on slavery.  He did not view the owning of slaves as morally wrong, however, he did believe that slavery would impede the development of the young nation.  Abraham began studying to be a lawyer and was admitted to the bar in 1837, moving to Springfield, Illinois to begin practicing.  Abraham met his wife Mary Todd in 1840, and the two were married on November 4, 1842.  They had four children together, only one of which survived into adulthood.

Abraham was elected to the US House of Representatives in 1847 but left after one term to return to practicing law.  Abraham became a company attorney for the Illinois Central Railroad and became successful, attracting other business clients, while occasionally serving as a criminal defense lawyer.  He once again became interested in politics following the passage of the Kansas-Nebraska Act in 1854, which allowed states to determine the legality of slavery, and the 1857 Supreme Court decision, which said African Americans were not citizens and had no rights.  Abraham held a moderate view on slavery, believing African Americans were not equals, but that the founding fathers intended for all men to have inalienable rights.

In 1860, Abraham beat out several better-known candidates to receive the Republican nomination for president.  He went on to win the election.  Before his inauguration, seven Southern states had seceded from the Union and one month later, on April 12, 1861, the American Civil War began.  President Abraham Lincoln used presidential powers that no president before him had used: calling for volunteers for military service without a declaration of war, arresting and imprisoning suspected Confederate sympathizers without a warrant, and suspending the writ of habeas corpus.  Abraham also took a personal interest in who was leading the army and how and where the war was being fought.  No matter what decision President Abraham Lincoln made, he was often at odds with a member of his cabinet and the American Public.

In September of 1862, with greater confidence in the ability of the Union army, Abraham altered the purpose of the war from preserving the Union to abolishing slavery.  On January 1, 1863, President Abraham Lincoln issued the Emancipation Proclamation, freeing all the slaves.  Later that year, he also gave his famous Gettysburg Address.  In 1864, Abraham was overwhelmingly re-elected president and on April 9, 1865, Confederate General Robert E. Lee surrendered to Union General Ulysses S. Grant, ending the war.

Reconstruction talks had already begun in 1863.  Abraham wanted to move quickly following the end of the war; quickly reunify the states with minimum retribution.  Unfortunately, he was opposed by radicals in the House and Senate and before the political battle could fully develop, President Abraham Lincoln was assassinated by John Wilkes Booth, an actor, and confederate sympathizer.  Abraham was shot on April 14, 1865, in Ford’s Theater in Washington DC.  Abraham died the following morning after spending nine hours in a coma.

While not a federal holiday, Abraham Lincoln’s birthday is celebrated by many, but not only for his leadership during the Civil War.  While he was president, Abraham also established Thanksgiving as a national holiday and issued the first presidential turkey pardon when his son made a pet of the turkey sent for Thanksgiving dinner.  Abraham is the only president to have his child die while in office.

Lincoln’s religious beliefs have always been rather enigmatic.  He was never outspoken about what he believed and never publicly identified with a particular denomination.  In his run for Congress, his opponent spread the rumor that Lincoln scoffed at Christianity.  In his public response to such charges, Lincoln acknowledged “that I am not a member of any Christian Church, is true; but I have never denied the truth of the Scriptures…”  Lincoln further states that he could not “be brought to support a man for office, whom I knew to be an open enemy of, and scoffer at, religion. Leaving the higher matter of eternal consequences, between him and his Maker, I still do not think any man has the right thus to insult the feelings, and injure the morals, or the community in which he may live.”

While Lincoln’s personal relationship with the Lord is unknown, we do know his strength of character.  It would seem that Lincoln believed that he should show, not tell, what he believed in.