“Liberty may be endangered by the abuse of liberty, but also by the abuse of power.”  As the smallest President of the United States, he measured in at 5’4” and weighed only 100 pounds!  He preferred to dress in black.  Instead of the more popular knee breeches of the day, he preferred trousers.  He was one of two presidents to sign the Constitution, and, it is due to his extensive notes, that we know what occurred during the Continental Congress.  At the Continental Congress, he was the youngest representative.  He is James “Jemmie” Madison, Jr., 4th President of the United States of America, serving from March 4, 1809, until March 4, 1817.  James was born on March 16, 1751, in Port Conway, Virginia at midnight and was the oldest of 12 children.  He was one of seven presidents born in Virginia. 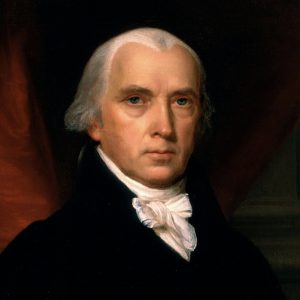 Upon returning from college in 1772, James entered politics, becoming involved in the tensions between the colonists and the British.  In 1774, James was part of the local committee that oversaw the local militia, his first public service role.  In 1775, he was commissioned as a colonel in the Orange County militia, although due to his slight stature, James never served in combat.  Instead, he served in the Virginia state legislature and became friends with Thomas Jefferson.  James went on to help write the Virginia Constitution, especially the language regarding religious freedom.

In 1780, James, at the age of 29, became the youngest delegate in the Continental Congress, where he took extensive notes.  After the Congress disbanded in 1783, he returned to Virginia and worked to help pass Virginia’s Statute of Religious Freedom in 1786.  In 1787, James was Virginia’s representative at the Constitution Convention.  At the time, James was supportive of a strong central government, with three branches (executive, legislative, and judicial) and a system of checks and balances.  In an effort to encourage all the states to ratify the Constitution, James joined Alexander Hamilton and John Jay in a series of publications that became known as The Federalist Papers.

In 1789, James was elected to the US House of Representatives, where he helped author the Bill of Rights.  These first 10 amendments to the Constitution highlighted many of James’ personal beliefs.  James initially supported President George Washington, but the two began clashing over financial issues, specifically the creation of the federal bank and the policies of the Secretary of Treasury, Alexander Hamilton.

In 1797, James left politics, returning to Virginia.  While in Virginia, he married Dolley Todd, who was nearly half his age.  Dolley, a widow, had a son from a previous marriage, whom James raised as his own.

James returned to politics in 1801, when his friend, President Thomas Jefferson appointed him as Secretary of State.  James supported the expansion of the United States with the Louisiana Purchase.  He also advocated for the failed policy of halting exports as the British and French were stopping American ships and forcing them into service.

Despite the failure of the Embargo Act of 1807, in 1808, James won the presidential election with nearly 70 percent of the electoral votes.  James is believed to have been the first president to serve his guests ice cream at the White House.  He was also the first to have an inaugural ball.  President James Madison also became the first president to have two vice-presidents die while in office.  His first vice-president, George Clinton, died in 1812.  James did not select another until his re-election.  His second vice-president, Elbridge Gerry, died in 1814.  James never replaced him.

Problems with the British and French were still at the forefront when James was elected president.  Although the Embargo Act was repealed, with a new act that reduced the trade embargo to only Great Britain and France, the situation between the two nations and the United States did not improve.

President James Madison became the first president to ask Congress to declare war, the War of 1812, against the British.  Despite this unpopular action, President James Madison was re-elected a short time later.  In 1814, the British invaded Maryland, making their way to Washington DC, where they burned the White House.  James’s wife, Dolley, managed to save the Declaration of Independence, along with other items of importance from being destroyed.  While president, two states, Louisiana and Indiana, were admitted into the Union.

James left office in 1817, retiring to his home at Montpelier, a tobacco plantation.  James busied himself running the plantation and serving on a board to create the University of Virginia with Thomas Jefferson.  Thomas served as rector when the school opened in 1825.  James assumed the position following the death of Thomas the following year.

In 1829, James briefly returned to public service as a member of the state’s Constitutional Convention.  He also co-founded a group aimed at returning freed slaves to Africa, which he viewed as a solution to the slavery promise.

Little is known about James’ religious views.  He was raised Episcopalian and attended an Episcopal church while he was president.  A review of his writings offer few hints as to his religious views.  Some scholars say James was a deist – the belief that God does not interfere, allowing the world to operate according to nature.  Others say that James lived his life with a Christian outlook and worldview.

James died on June 28, 1836, the last of the Founding Fathers to die.  James was 85 years old and died of heart failure.  He was buried in Montpelier, Virginia.