On Christmas Day, 2015, Concussion, starring Will Smith, was released. As you might have guessed from the title, the movie looked at the effects of concussions, specifically on football players who endure repeated concussions throughout their time playing the game. The movie, while not exactly presenting any new information, did get football fans, and others, to engage in discussions about brain damage. It caused some parents to question at what age a child should start participating in sports such as football, boxing, and wrestling, that are known for potentially causing brain damage – through concussions and/or repeated blows to the head. Unfortunately, the conversation faded away all too fast. 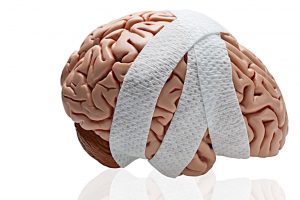 March is National Brain Injury Awareness Month. While Concussion raised concerns about brain damage in a particular sport, the Brain Injury Association of America seeks to educate the general public about brain injuries in general. Over 3.5 million children and adults sustain an acquired brain injury every year. The exact total is unknown, as not all incidents are reported. Acquired brain injuries can be caused by lack of oxygen to the brain, diseases, seizures, strokes, substance abuse, tumors, and/or exposure to toxic chemicals.

Traumatic brain injuries, like concussions, are caused by trauma from an external force, such as being in a car accident, falling off a bicycle, or suddenly having your head slammed to the ground by an opposing player after catching the football. A traumatic brain injury occurs every 13 seconds and 50,000 die every year from the injury. The Brain Injury Association of America estimates that one out of every 60 individuals live with a disability related to a traumatic brain injury.

Our brains – the way they function, operate, and their importance – are extremely complex. Scientists may study them for their entire lives and still only understand a fraction of their operations! Therefore, brain injuries present a problem for scientists because the long-term effects are relatively unknown and treatment for brain injuries are limited to what we know.

This March, raise your awareness about brain injuries. Know what they are and how to recognize symptoms. Talk to your children and increase their awareness. You never know when your knowledge could help another.