John sat up, swinging his feet off the bed onto the floor. He rested his elbows on his knees, rubbing his face with his hands. His night had been like many others he had recently; what seemed like a few minutes of peaceful sleep, between the unpleasant memories that haunted him. 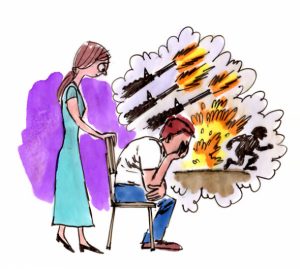 John has once woken up from one of his nightmares, crouching and peering around the bed towards the door, grabbing for the weapon that wasn’t there, before remembering where he was, and where he wasn’t. He shook his head, as if to clear the memories, before pushing himself up to get ready for the day. John was hyper-aware of his surroundings. He kept an eye on his coffee timer, so that he would not be startled when it went off. He still flinched when it went off, as if struck. Upon hearing a knock at the door, John’s first reaction was to take cover, already crouching and moving, before it registered that it was simply Nicole, his friend, at the door, whom he had asked to stop by at this exact time.

Nicole understood why it took him longer than it should have to open the door. She understood why he hesitantly peered around the door before opening it enough to allow her in. She understood why he quickly shut the door behind her. John had been an active-duty soldier for years before returning home. She didn’t know what he had been like before the military, before returning to his hometown suffering from post-traumatic stress disorder, more commonly referred to as PTSD. She had heard that he once use to be the life of parties, regaling those around him with stories of his high-school antics. He now preferred to avoid large social situations altogether, standing off to the side, usually with his back to a wall, when he did attend one.

Nicole had come to walk with John that day. For John, her presence was reassuring. It let him know that he was not alone in his struggle. He had learned that an estimated 7-8 percent of the US population will have PTSD at some point in their lives. During any given year, approximately 5.2 million people will suffer from PTSD. John also knew that his story was unique, because it is his story! PTSD is not the same for everyone. Each person who suffers, suffers in their own way. No two persons’ experience is the same, even if they had the exact same trauma to cause their PTSD!

Shortly after the nightmares and erratic behavior began, John learned all he could about PTSD, hoping that knowledge would help him combat his sleepless nights and hyper-vigilance. Upon hearing PTSD, many people imagine soldiers, but PTSD can be caused by any traumatic or life-threatening event in a person’s life. This can include a personal experience, simply witnessing the event, or in-depth research of such events. PTSD can occur to anyone, of any age, of any race, for any number of reasons. PTSD can manifest in a multitude of different ways, with different intensities for different people. John and Nicole are examples of that.

John’s case is severe, but he is, slowly, getting better. He is beginning to be able to sleep without medication, something that was impossible when he first returned home. He attends counseling every day. It helps. John has also begun expanding his activities, by volunteering, along with another member of his support group who also has PTSD. He is exploring the idea of buying a dog. Not only will it give him a purpose, but he thinks it may help ease his mind to have someone else watching his back. It will also force him out of the house.

Some of John’s old friends wonder what’s wrong with him. He is no longer willing to throw back a few beers with them on Saturdays during the game, or any other time. John has tried to explain, but they do not understand; drinking and drugs simply make him worse, intensifying his already heightened feelings of worry and anxiety. Should anything happen, he could lose control. His friends loudness do nothing to ease his troubled mind. So for now, John avoids them.

Nicole also suffers from PTSD, although not as severe. She has held down a job for the past year. A quiet, but physically active job. She is an encouragement to John, that one day his life may once again have a semblance of normality. Nicole told John to let her know when he thinks he may be ready to start working. Her boss is understanding, willing to let him start just a few days a week.

June is Post-Traumatic Stress Disorder Awareness Month. We ask that in your prayers this month, you remember those like John and Nicole, those suffering from PTSD. Please pray for healing.