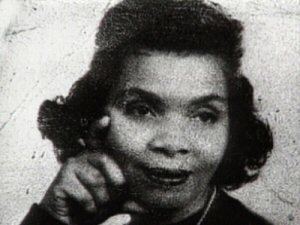 Mary Louise Smith was born in 1937, to a Catholic family in Montgomery, Alabama. During her childhood, she attended and graduated from St. Jude Educational Institute. On October 21, 1955, at the age of 18, Mary was returning home by way of the Montgomery city bus. At a stop after Mary had boarded and seated, a white passenger boarded. There was no place for the white passenger to sit. Mary was ordered to relinquish her seat. She refused. Mary was arrested and charged with failure to obey segregation orders and given a nine-dollar fine, which her father paid.

Like Claudette Colvin, Mary was considered and rejected as the person to build a lawsuit around against the segregation of city buses. She was rejected in part for her age, which was thought to be too young, but also because of a rumor that her father was an alcoholic. Until the Browder v. Gayle lawsuit, Mary’s arrest, and the incident which led to her arrest, were kept quiet, known only to family and neighbors.

Mary’s civil rights activities did not end with her stand – sit – on the bus. She, along with her sister and their children, were part of a class-action lawsuit for the desegregation of the Montgomery YMCA. Mary also participated in the March on Washington in 1963, and the march, led by Martin Luther King, Jr., from Selma to Montgomery in 1965, for equal voting rights.

Mary was proud of her actions that day, just as she was proud of the action of Rosa Parks, the woman whose stand – sit – spearheaded the bus boycott. Mary was also proud of what she was able to help accomplish for the civil rights movement. In 2005, Mary attended Rosa’s funeral saying, “I had to pay by tribute to her. She was our role model.”