GOBBLE GOBBLE GOBBLE! GOBBLE GOBBLE GOBBLE!  The specialized doorbell rang throughout the large house. “COME IN!” a voice shouted from somewhere within the house. As the door opened, two young children ran by the door and up the steps. “Be careful!” a father called from an adjacent room, while grinning and shaking his head. The final family to arrive came through the door, looking out for more children.  They made their way into the kitchen, where they placed their dishes on an already crowded counter. “Oh! What do we have here?” several people wanted to know.  Some crowded around, hoping to sneak a bite of food before dinner – preferable without getting their hand smacked for their troubles! “Salad and dessert,” said the youngest member of the recently arrived family, pointing at each dish accordingly.

The hostess directed the girl where to place the dessert until later. Room was made for the salad on the counter that would serve as the buffet. 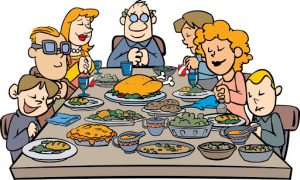 A short time later, with the aroma of baked turkey wafting through the air, all the food was ready to be served and was set on the improvised buffet table. The host raised his voice, asking everyone to gather round and join hands. The youngest cousins were at the front of the group, so an eye could be kept on them, and because they wanted to be first in line for the food. As he looked around at the rather large group that had gathered, he had to smile, remembering like it was yesterday, when the young parents were children themselves and he was the one yelling at them to be careful. Now, here he was, a grandfather!

The young parents looked at their children, remembering when they were the ones running around the house. They remembered playing N64 with their young cousins before dinner, with whom they now discussed work, politics, and world issues. They had become the parents they once found boring!

As the host asked another family member, a new brother-in-law, to pray before the meal, the new brother-in-law looked around. One year ago he had been here, although not officially yet part of the family. His wedding to the host’s sister occurred just one month ago. Tears of joy came to eyes at belonging to this loud, rambunctious, but loving family. He cleared his throat and began to pray, thanking God for his new family, for everyone’s safe travel to be together, and for their continued safety on their trips home.

His prayer is one that is echoed in many houses on Thanksgiving. It is a prayer that echoes back in time, back before Thanksgiving even became a national holiday, back to the time of Jesus, and beyond.

Jesus was sent to this earth to die, so that all may be afforded salvation. Yet before His death, He was a teacher. He taught how to live a life that is pleasing to the Lord. One of Jesus’ messages was teaching to give thanks, in all things. It was a message that echoed back to the early celebrations of the Israelites: the Firstfruits and the Feast of Weeks. Both were celebrations of giving thanks for what the Israelites had received from the Lord. 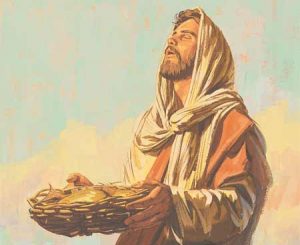 Jesus’ example is one we all should follow. And not just on Thanksgiving! Let the word of Christ dwell in you richly, teaching and admonishing one another in all wisdom, singing psalms and hymns and spiritual songs, with thankfulness in your hearts to God. And whatever you do, in word or deed, do everything in the name of the Lord Jesus, giving thanks to God the Father through him. (Colossians 3:16-17, ESV) Like Jesus, we are to have thanksgiving in our hearts at all times! For what do you have to be thankful?