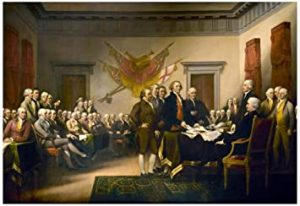 It was no light matter, what those 56 men did. They risked death, for indeed they had just signed their own death warrants. And when we remember them on this 4th of July, we remember what they did for this country, and why they did it. We remember the freedom they fought for by signing the Declaration of Independence, the freedoms we still have and fight for today.

Many of those freedoms are highlighted in the Bill of Rights; the first 10 Amendments to the Constitution, which governs this nation. These amendments are often mentioned as what sets America apart and makes her governing different from other nations in the world. These freedoms are guaranteed and cannot be taken away by the government. They were important, because they were what the founders felt was lacking from the British rule they were under.

The First Amendment guarantees that, “Congress shall make no low respecting an establishment of religion, or prohibiting the free exercise thereof…” How fortunate we are to live in a nation where we may freely practice whatever religion we desire! In whatever manner we choose!

This was not always the case and, in some countries, certain religions are still forbidden today. Sometimes even worshipping the wrong form of the religion can lead to your death! The Founding Fathers knew this, for many in the New World had left England due to religious persecution for refusing to worship as the State demanded.

We are extremely fortunate in America that we have our religious freedom, for throughout history, religious freedom has been a rarity. Daniel – and the other Israelites – did not always have it. Jesus and His disciples were persecuted for their beliefs. Early

Christians were not welcomed in the Roman world. Even today, there are many parts of the world where Christians must hide their faith and their worship – and face death if they are caught.

This 4th of July, enjoy the fireworks and BBQ! Enjoy lounging by the pool, cold drink in your hand! Enjoy the day off from work and time with friends and family! But take a moment to remember and celebrate the freedoms of this nation. The freedom to worship! And pray for those who are not free. “May your God, whom you serve continually, deliver you!”