On April 22, 1864, the United States Congress passed the Coinage Act, which changed the composition of the one and two-cent coins. What was the change? It was a change to the design to incorporate the American logo, “In God We Trust.” 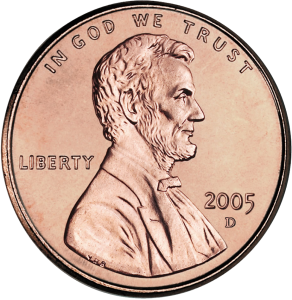 On November 13, 1861, Reverend MR Watkinson, Minister of the Gospel from Ridleyville, Pennsylvania wrote a letter to Secretary of the Treasury Salmon P. Chase. It was one of several appeals from throughout the country that he had received. Watkinson’s letter pointed out that the currency of the United States does not recognize “the Almighty God.” He went on to explain that by not doing so, we are identifying ourselves as a “heathen nation.” Secretary Chase commissioned Director of the Mint at Philadelphia James Pollock to prepare a motto, stating, “No nation can be strong except in the strength of God, or safe except in His defense. The trust of our people in God should be declared on our national coins.” Two years later, they had settled on the motto “In God We Trust.”

It was in 1864, that this motto first started to appear on our coins. In 1907, the motto was omitted from newly issued gold coins. This caused a torrent of public criticism, which ended with legislation passed in 1908, which made “In God We Trust” mandatory on all coins on which it had previously appeared. In 1955, “In God We Trust” became mandatory on all coins and paper currency in the United States. In 1956, “In God We Trust” became the official national motto of the United States, following the passage of an Act of Congress.

Many never give a second glance to the four words printed on our money, in fact, many never really look at our currency except to determine the value of the bill or coin they are holding. However, every time we make a transaction, every time we get into our wallet or purse, we are reminded to put our trust in God. As Christians, everything we do is to honor and glorify our Savior. Having “In God We Trust” on our money, is a simple reminder that we are to place our faith in our Lord God, and no other.