On September 11, 2001, our eyes were opened.  It no longer was about ourselves, but about our country.  Life changed forever that day.  Nearly 3,000 lives were lost that day, and thousands more over the last 20 years, as a result of what happened on that day.  Our eyes were opened and filled with fire, tempered with tears.  We looked not to ourselves but to each other.  What could I do to help them?

Firefighters, police officers, and emergency personnel flocked to the burning buildings, stunned by what they were seeing, and what they had already seen. And then, as one, they entered those buildings, very aware it was likely to be the last thing they ever did.  They were trained.  They were prepared.  They were ready. 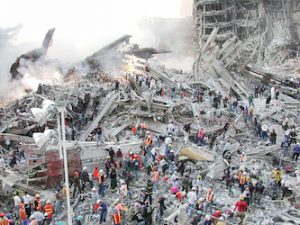 Both the trained and the untrained, the prepared and the unprepared, the ready and the not ready, showed their love that day.  Through their actions and their sacrifices.  They saw evil and were determined to do good, to overcome the evil with love.  On this day, 20 years ago, America stood united.  Rejoicing together at the small miracles to appear, and weeping together at the devastation consuming the nation.  But we stood together!

Records: an account in writing or the like preserving the memory or knowledge of facts or events.1Wrongs: not correct in