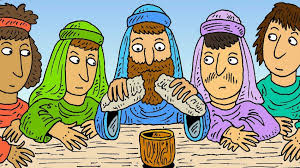 Jesus knew it was His final day. He knew what was coming. Instead of moping about, as many of us may have done, Jesus spent the day in prayer and celebrations with His friends. The Passover celebration was, and remains, a major holiday for the Jews. It is a reminder of the slavery their ancestors suffered in Egypt and how their continued faith eventually led to their freedom. As the tenth and final plague, God struck down every firstborn, except those who had done as the Lord commanded and placed blood on the sides and tops of their door (Exodus 12:1-30). Those who had the blood on the doors were passed over. The Passover has been celebrated since Israel left Egypt, according to the instructions of the Lord.

Jesus links this old tradition to a new tradition: Communion, which is celebrated as a reminder of His (soon-to-be) sacrifice so that we could be saved. When we partake in Communion, we are to remember the sacrifice Jesus made. He took upon Himself all the sins of the world – past, present, and future. Before His sacrifice, animal sacrifices were repeatedly offered. Jesus established a new covenant with His blood, which only had to be shed once. Salvation now came through belief in the resurrection of Jesus Christ, not through the following of Old Testament laws.

Also at the Last Supper, Jesus revealed that one of the Twelve, one of the men who had spent the past three years with Him, listening to Him, witnessing His miracles, and serving with Him, was going to betray Him. The disciples were all surprised to hear this revelation. 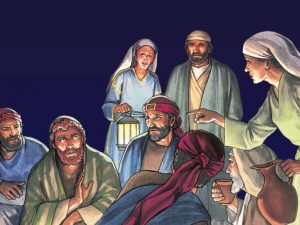 Eleven were shocked and saddened that one of them, Jesus’ closest friends, would betray them. Judas was surprised to learn that Jesus knew of his plan. Each questioned if it was them, but Jesus did not reveal the name. Peter, ever the outspoken one, was emphatic that he would not betray His teacher. Jesus predicted that Peter would betray Him three times before the rooster crowed.

Peter is the most outspoken of all the disciples. He speaks up when he thinks Jesus is wrong, often sticking his foot in his mouth with his comments. Peter is extremely relatable to all of us (even if we do not want to admit it)! Peter’s story, however, is not about his failures, but about how he handles them. Yes, Peter fell. Peter denied Jesus Christ. But Peter goes on to become a prominent leader in the early Christian church. Peter shows that God does not demand perfection to serve Him, only a willing heart!

It was Jesus’ final day and He spent it with His friends. Knowing His death was so near, He celebrated with them, remembering the past which gave hope to the future. In this celebration, He hinted at what was to come, knowing that in time, they would understand.