Jesus Christ had died, but due to the late hour and approaching Sabbath, His followers were not able to properly prepare His body according to the customs. They spent the Sabbath mourning Him and on the following day, once the sun had risen, three women went to the tomb where Jesus had been buried. They were there out of love for Him. They had come to anoint His body, to honor Him. They were grieving. They had lost their friend and teacher, a Man whom they had seen perform impossible miracles and who had preached of love, forgiveness, and compassion.

When they arrived, they were shocked to see that the stone had been rolled away from the entrance. Who would have done such a thing?! Had His body been taken? Mutilated? Destroyed? Then they saw an angel. They were afraid. The angel told them not to fear and not to grieve. Jesus had risen and was alive! The women were shocked. They did not know what to say! The angel further instructed the women to go and tell the disciples, especially Peter, that Jesus had arisen, and that they were to meet Him at the designated location.

Jesus remembered Peter. He had spent nearly three years with him and knew how he reacted to situations. Jesus knew that Peter had denied Him. He knew how Peter felt and reacted upon realizing what he had done. He remembered Peter and wanted Peter to know that he had been forgiven and was wanted in Galilee.

Jesus met with His disciples who, upon realizing He was not a ghost, rejoiced. Those who had doubted He lived could verify the truth for themselves, by touching His wounds. 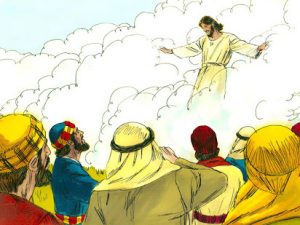 Jesus was not to stay on this earth, though. He was to return to Heaven to be with His Father and prepare a place for all who would follow Him. Jesus came back, not only to show that He had indeed risen from the dead, but also to give His disciples their final instructions. The disciples had completed their training. They were ready. Jesus’ final instructions were to go out into all the world and share the good news: eternal salvation through heartfelt belief in Jesus Christ! That remains our charge today. We are now the disciples!