The scepter will not depart from Judah,
nor the ruler’s staff from between his feet,
until he to whom it belongs shall come
and the obedience of the nations shall be his.
(Genesis 49:10, NIV)

The scepter shall not depart from Judah,
Nor a lawgiver from between his feet,
Until Shiloh comes;
And to Him shall be the obedience of the people.
(Genesis 49:10, NKJV)

Have you ever studied the etymology of your name? You look at its meaning and its history, such as from where it originated. From this, you can understand where your ancestors lived, and perhaps even recognize notable events through which they may have lived. It can be a way of connecting to history. 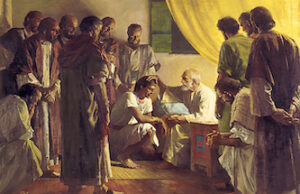 Jews considered it important to know their history. And the history of Israel was their history! During the time of Jesus, it was not uncommon to be able to trace your family back to the sons of Jacob, also called Israel. Jesus was no exception. Both the Gospels of Matthew and Luke trace Jesus’ genealogy. We know he was of the tribe of Judah.

As Israel lay dying, he bestowed upon each of his sons a special blessing. The blessing given to Judah, his eldest son, contained a Messianic prophecy. In the first part of Genesis 49:10, Israel establishes that Judah will be the royal tribe. This came true with the anointing of King David, for King Saul was of the tribe of Benjamin. Descendants of King David continued to sit upon the throne until Jerusalem was sacked by Babylon.

And, eventually, as indicated by the second part of the prophecy, a descendant of King David will come who will rule eternally. In His first coming, Jesus established Himself as Shiloh, a descent of King David, tracing back to the tribe of Judah. He is the final King of Israel. Upon His return, His second coming, all leaders from all nations, all of mankind, will be forced to acknowledge that this man – Shiloh – is Lord of Lord and King of Kings.

So what does this mean for us? Messianic prophecy was given so that the Savior of all mankind could be identified when He came. There are over 300 specific Messianic prophecies throughout the scriptures. The odds of one person fulfilling all the Messianic prophecies are so statically improbable that the number is beyond comprehension for even the most gifted mathematician. When we see Him named Shiloh, we should be reminded of all that was prophesied and how Jesus fulfilled the prophecies. Shiloh is an encouragement to all believers. Shiloh is, without a doubt, the Savior of all mankind.