The Apostle John begins his Gospel by drawing a direct parallel to the first words written in the first book of Torah, Genesis. “In the beginning…” John, with his Gospel, is setting out to answer the question, “who is Jesus Christ?” 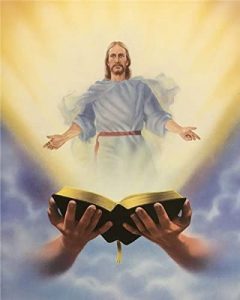 Jesus, the Son of God, one part of the Holy Trinity, has always been. He was there to see the light and the darkness divided. He made it happen! And He has seen everything since then. He helped in creation, He saw the fall of mankind, the creation of the nation of Israel, the downfall of the nation of Israel, the corruption, the repentant hearts, the need for a perfect savior. The Apostle John, in the first sentence of his Gospel, makes it abundantly clear – Jesus always has been, always will be, God.

The first – and even the fifty-first – time reading this passage can be confusing. Why was John calling Jesus the Word, instead of something more familiar? John was emphasizing the divinity of Jesus Christ. In the Old Testament, the word of God is a revelation from God. The word of God revealed to Moses how to build the tabernacle, how to arrange the camp, and the rules and laws that the Israelites were to follow. By calling Jesus the Word, John was again drawing a parallel to the Old Testament.

14 The Word became flesh and made his dwelling among us. We have seen his glory, the glory of the one and only Son, who came from the Father, full of grace and truth. (John 1:14, NIV)

The Apostle John leaves no doubt as to who he means when he writes of the Word. Jesus Christ, who existed from before the beginning, came to earth as a flesh-and-blood human being. But He also retained His divine nature. He came to earth as the Son of God, with a purpose and a mission. Jesus, the Word, came to speak the word of God to mankind, to reveal God to mankind. His death and sacrifice to save mankind revealed God’s love, His love, for us.

So what does this mean for us? The Gospel of John is more than just a record of Jesus’ life and teachings. John acknowledges at the end of his Gospel that he left out many things Jesus did during his life, but those he did include were to help us understand who Jesus is – all of Him! The man and the divine being! By knowing who Jesus is, we can believe in Him and accept His gift of eternal salvation. When you read the Gospel of John, do you read with the understanding that Jesus is God? Always has been and always will be. Perhaps it is time to reread the Gospel of John.